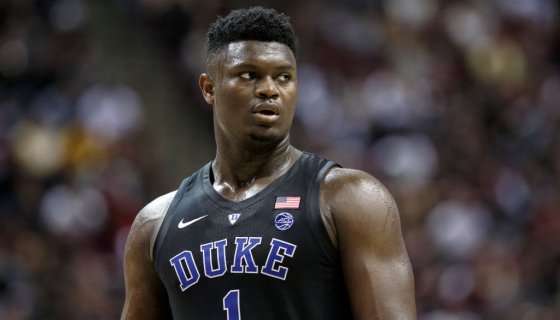 is currently in the NBA terrorizing rims, but his former agent latest allegations have him revisiting his time while at Duke.

This is not the news that Duke head coach was looking forward to hearing on Mother’s Day.

Williamson is currently engaged in a legal battle and its heating up with his former agent at Prime Sports Marketing, Gina Ford. She is doing her best impression and snitching alleging he took illegal benefits to attend Duke University and wear specific sports apparel brands.

Wallach detailed the information in a series of tweets.

8. Admit that you knew that Lee Anderson demanded and received gifts, money and other 3 benefits from persons acting on behalf of Nike (directly and/or indirectly) to influence you to attend Duke University to play basketball.

10. Admit that before you became a student at Duke University, you knew that Lee Anderson demanded and received gifts, money and/or other benefits from persons acting on behalf of Adidas (directly and/or indirectly) to influence you to wear Adidas shoes.

11. Identify by Landlord Name, address, telephone number, and monthly rental rate, the property that you, and your family lived in during your attendance of Duke University. pic.twitter.com/Cqqvy4OJIK

18. Before attending Duke University did you, or anyone acting on your behalf, accept money, benefits, favors or other things of value to induce or incentivize you to use and/or wear Adidas tennis shoes and other products. pic.twitter.com/JCFITBwrqe

The New Orleans Pelicans rookie was served interrogatories asking to divulge under oath whether or not he received “money, benefits, favors or other things of value” to enroll in Duke and rock and use Nike or adidas gear.

Williamson filed a lawsuit against Ford and Prime Sports Marketing, claiming the contract he signed with the sports agency was null and void under North Carolina’s Uniform Athlete Agent Act. Ford and Prime Sports countered weeks later with their own complaint against Williamson and CAA, his new representatives, seeking roughly $100 million in damages and more for what they describe as a breach of contract.

This is not the first time Zion’s name was brought up when it comes to receiving illegal payments. Disgraced attorney, Michael Avenatti, also made a similar claim about the phenom alleging while he was in high school.

It will be interesting to see how this whole situation plays out.