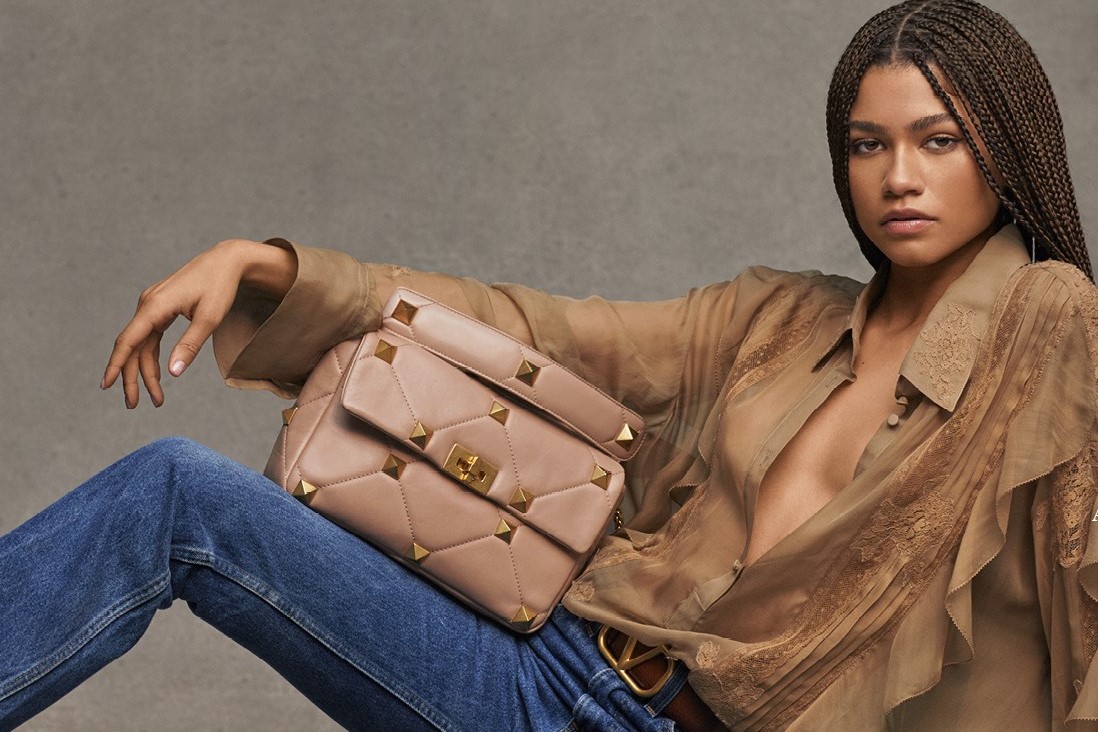 Titled Valentino Collezione Milano, the spring offering is a “collection that expresses a radical attitude through creativity” – a maxim which could just as easily apply to Zendaya herself. The accompanying campaign, lensed by Michael Bailey Gates, captures the actress’ insouciant brand of elegance as she reclines in a pair of indigo jeans and a fluid, half-buttoned boho shirt. Perched on her thigh is the Valentino Garavani Roman Stud Handle bag, which, at the hands of Zendaya, transforms into a renewed symbol of punkish cool.

Elsewhere in the shoot, the Euphoria star strikes a rebellious pose in a hot pink overshirt, which is immediately offset by the sudden entrance of a demurely shot LBD. It’s the same swing in extremes that were present on the runway last September where linear, monochromatic looks abruptly bloomed into bright, ethereal cape dresses blasted with vibrantly-hued floral prints.

For creative director Pierpaolo Piccioli, “equality, inclusivity, and empathy” are core values of the fashion house, so uniting with Zendaya was always going to be a no brainer. Just last year she was heralded as a visionary and last weekend, she accepted the SeeHer accolade (dressed in Valentino couture, obvs) at The Critics Choice Awards, which honours women who push boundaries and defy stereotypes within the entertainment industry.

In Piccioli’s search to “resignify the codes of the house” this season, Zendaya represents the first official Valentino “DiVa”. Rather than some finger-snapping dramatist, for Piccioli, a diva is simply someone who “lives within the power of her values, and observes a mantra of empathy and connection”. And it’s this sense of groundedness, knowing, and compassion which has become synonymous with Zendaya. “She perfectly embodies and represents what Valentino is and stands for,” says Piccioli, “individual and confident, on the path to redefine”.

Discover the collection for yourself here.