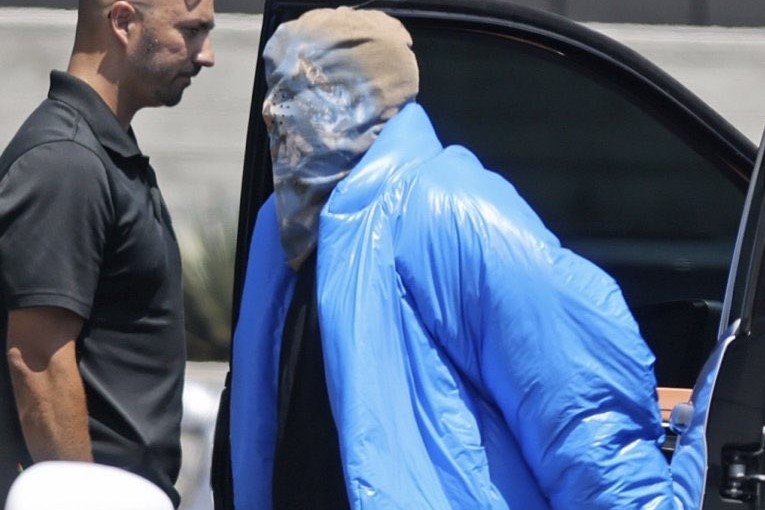 Kanye West was spotted in LA this past weekend – where temperatures hovered around a clammy 25° celsius – in an iridescent, full face balaclava, and an unbranded, baby blue puffer jacket. The rapper was, quite controversially, also sporting a pair of Nikes – though any speculations over his partnership with adidas were quickly muffled when it became clear that Ye’s jacket was, in fact, the first piece from his much-anticipated Yeezy Gap collection.

The Round Jacket, presumably named after its curved, drop-shoulder silhouette, is made from recycled nylon and will retail for $200, which is approximately £140. The piece is currently available on pre-order for US customers only, via a sign up form, with orders expected to land sometime in the autumn. To coincide with the launch, Yeezy GAP has sent up floating projections of the Round Jacket along the side of buildings in New York, Los Angeles, and Chicago – a stunt which Kanye previously pulled to promote his Yeezus album back in 2013.

While GAP are keeping tight-lipped about the official launch date, it’s safe to say a full Yeezy GAP line should be expected pretty imminently. Originally slated to hit stores this Summer, GAP’s CEO, Sonia Syngal told The New York Times that “we’re going to let Yeezy reveal the exact date”, adding that the company is “pleased with the creative process that we’re seeing with Yeezy”. On a later earning’s call, as reported by The Business of Fashion, Syngal suggested that a release may occur in either the second or third quarter of this year.⁠

Drop dates aside, Kanye has signed onto GAP for ten years – so it really is a marathon, not a sprint. Get your pre-orders for the Round Jacket in here.