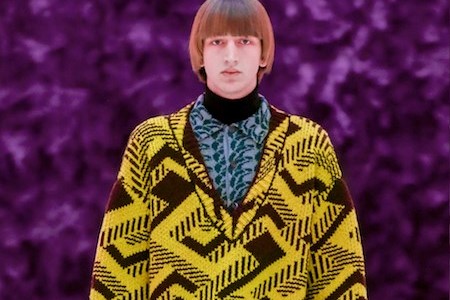 Long johns are hot for AW21

Miuccia Prada and Raf Simons might have dropped their first joint womenswear collection back in September, but for the Belgian designer’s most devoted stans, today marked the debut of the offering they’d been waiting for: menswear. With physical shows still off the agenda thanks to the virus that needs no introduction, instead Raf and Mrs. P presented what they’ve been working on via a short film, before hosting their second ever post-show talk at Prada HQ. As usual, we’ve got you covered – here’s everything you need to know.

…which came in an uber-luxe, pastel-hued, faux fur box, finished with Prada’s signature enamel triangle. Naturally, editors, influencers, and tastemakers lucky enough to score one couldn’t keep their hands off them, with IG Stories full of perfectly manicured fingers being run through the fibres. If you’re looking to do the same, well… start saving and keep your eyes on eBay, we guess.

THE SETTING WAS AS TACTILE AS THE INVITE

The Rem Koolhaas-designed show space almost made it feel like you’d stepped inside one of the aforementioned Prada boxes, with luxurious marble and resin floors offset by thick, shaggy carpeting in sugary pastels and rich jewel tones climbing up the walls. Get ready to see a lot more of these fabrics: according to the house, the materials used to bring the show to life are set to be upcycled within Prada spaces and pop-ups around the world, before finally being donated to Meta – a circular economy project working in collaboration with La Réserve des arts to distribute waste from fashion shows to professionals and students in need of fabric. Meaning if you’re currently studying (or planning to study) within the fashion sphere, you might just get your hands on some Prada offcuts in the not-too-distant future.

…IN FACT, THE WHOLE COLLECTION WAS PRETTY TOUCHABLE

Almost a year into a pandemic that’s seen us largely holed up in our homes, it seems that Miuccia and Raf are feeling as starved of human contact as the rest of us. It’s no surprise, then, that their AW21 menswear collection is rooted in tacticility, and made up of endless pieces you’d likely just want to reach out and touch if you were in close proximity to someone wearing them. With Raf-esque polo shirts layered over slim-fitting roll-necks, butter-soft leather and corduroy car coats with shaggy shearling collars, XL bomber jackets, and uber-Raf oversized v-neck sweaters on the line-up, looks were finished with Prada pouches to sleeves, collars, and even gloves. Patterns clashed throughout, with geometric jacquard and pinstripes pleasingly jostling for attention.

Also seen yesterday at Fendi, long johns played a huge part in Prada’s latest collection. In fact, every single look was based around a pair, as Raf pointed out in the post-show Q&A. With the first looks out making the cosy style the star of the show, others peeked out from the hems of trousers. You heard it here first.

THE POST-SHOW Q&A WAS EXTREMELY CUTE

Having found their feet answering a series of submitted questions at September’s SS21 show, this time around Raf and Miuccia – aka mom and dad – talked live with students from around the world via Zoom. Discussing everything from how they’re finding working together to navigating a global pandemic as fashion designers, they also expanded on the collection’s themes – with Miuccia even letting slip she hates pinstripes, despite the offering being full of them. Seemingly the key to a great relationship really is compromise.

Rewatch the show below.