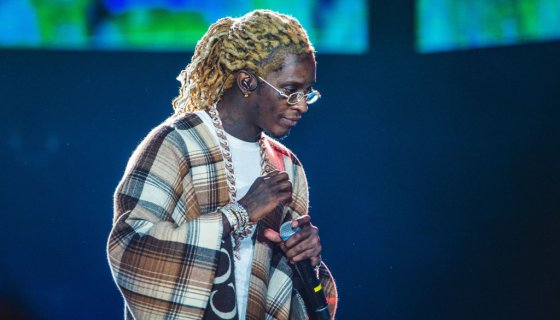 French Montana might be trying to in a VERZUZ battle with unlikely foe Kendrick Lamar, but it appears a new face has entered the discussion. threw a shot towards Montana regarding K-Dot, but it sparked an ugly back and forth that had Thugger making some highly questionable threats towards children.

After The Coke Boys/Bad Boy Records star claimed he could take on his TDE counterpart in a hit for hit battle, Thug didn’t think Montana would stand a chance. A video of the Atlanta rapper shows him laughing off Montana’s jab and called him a fool at the end of the clip.

Montana caught wind of Thug’s reply and unsurprisingly took the low road in his rebuttal on Twitter.

“He had to wear a dress so he can tuck the scattt,” Montana tweeted, while also adding his new single “That’s A Fact” in hashtag form.

After Montana noted the fact that Thug wore a dress in the “No Stylist” video and promising to expose his new rival, Thug replied by seeming to say that he would put a ual organ into the throats of Montana’s children. Some fans online say that was the rapper’s way of referencing a gun, but it’s still a gross thing to say towards kids no matter how you swing it.

Young Thug has more words for French Montana and clowns him hard 🤣 pic.twitter.com/3wfXLu3SUJ

The above @STRAPPEDUS account captured all of Thug’s social media replies to French, and DJ Akademiks has been keeping tabs his Instagram page. We’ll share some of that footage below but keep scrolling to see the reaction to Young Thug’s threats towards French Montana.

This is the house #AuntieFrench owned once upon a time. Dam thought I had something to do tonight

This is not u neither? 😭 🤦‍♂️ THIS SHIT CRAY CRAY #moreinfluential #thatsafact PUT THAT BREAD UP AND BRING YOUR BEST 20 songs

What the fuck did French Montana do to Young Thug for him to tell us that he is going to put his dick down some kids throat!!!? 🤷🏾‍♀️👀. What the what!!!? pic.twitter.com/aNh84X9Qpv

Mornin. I hope everyone has a good day. I don't know why Young Thug said anything about putting his pen down kids' throats. ?? I know that it wasn't literal. Sounded weird AF tho.

wait PAUSE …. did young thug really say he would put his dick in French kids' mouth???

did French say something back to Young Thug?? why Thug come so hard and said he’d put that thang down ppls kids throats ☹️

Went to sleep to the TL talking about French Montana vs Kendrick and woke up to French vs Young Thug??? pic.twitter.com/7jAzTDxU5P

French Montana really thought he did something when he posted Young Thug in a skirt as if Thug ain’t proudly wear this for his album cover. pic.twitter.com/b4othBqH0h

Btw young thug would WASH french Montana in a battle