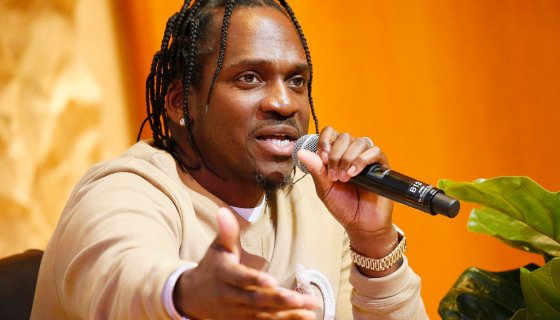 Young Thug went out of his way to critique for his Drake diss on an unreleased song tied to Pop Smoke’s new, posthumous album, Shoot For The Stars, Aim For The Moon. The Atlanta rapper seemingly got his wish, and Push A Ton reacted.

Apparently Pushed dropped a verse on an unreleased track where aimed bars at Drizzy. The issue is that Thugga and Gunna was on the track, but the former (and probably the latter as well), was unaware of verse’s content.

Young Thug comments on Pusha T dissing Drake on the song ‘Paranoia’ that featured him and Gunna, which was supposed to be on Pop Smoke’s new album. pic.twitter.com/sXsSy4t65n

“i don’t respect the pusha t verse on the song with me and gunna cause I don’t have nun to do with y’all beef nor does Gunna,” said Thugger on his IG Stories, per 2020 rapper protocol. “and if I knew that was about him I would have made changes on our behalf.. this rapper sh*t so gay.”

Well, alrighty then. Don’t see how that’s “gay” per se—but .

The song in question is reportedly called “Paranoia” and fans believe is references the incident in Toronto when Push had to cut a performance short due to Drake stans acting up in the crowd.

“You know reality bites, it’s chess, not checkers/Those empty threats only sound good on your records,” spits Push on the track, which has made it online. “If the patois is not followed by a blocka, it’s like marked for death screwface, without the choppa/Let ’em rush the stage when you made like Sinatra, only to hide the blade flyin’ back through LaGuardia/I might even buy a home out in Mississauga…”

As for Thugga, Push responded in kind IG stories with a series of statements. Basically, Push says the only reason anyone knew what the verse was about was because Drake told them so. The Virginia MC also noted it was his idea to even have Young Thug on song, and that ultimately, he doesn’t care what Thugga thinks of the situation.

“I WOULD NEVER look or need YOUR respect for what is it I bring to this rap game!!,” wrote Push, who also suggest to his homie and Pop Smoke’s manager Steven Victor not include the song on Shoot For The Stars, Aim For The Moon’s deluxe version.

And that’s that on that, for now. How about we all just focus on Pop Smoke’s new album, though?

But if you must see what’s going on with the petty as the sides have been taken, see some potent reactions below.

To anyone sayin they didn’t know who Pusha T was before the Drake beef, that says a lot more about you than it does Push.

Pusha T is the friend you called when someone stole your bike and you found out who had it but you needed some backup just in case you had to fight and on the way there, he pulls out the knife your grandma used at Thanksgiving & asks calmly:

I agree it wasn’t the time and place, but Calling that pusha t verse mid in the same year drake put out toosie slide is very brave pic.twitter.com/EDiGdRE7Wy

Everyone complaining about Pusha T not letting his foot up off of Drake are the same people that didn’t bat an eyelash when Drake was doing the same to Meek Mill.

Pusha T has been obsessed with lil Wayne and Drake since 2011, and everytime he’s about to drop an album, he disses them. Is that not weird to y’all ? The only time you talk about Pusha is when he’s talking about Drake. Female tendencies

drake and pusha t still beefing in the middle of a pandemic. you gotta respect the commitment

In the terms of classics and constant discography pusha T is miles BEHIND drake . pic.twitter.com/d5AD1Rklav

Push when he needs attention pic.twitter.com/IyUlTTluJu

Pusha T should not be revered as an icon. He is a crack cocaine dealer who comes up with nursery rhymes and puts them to music. Stop holding these people up as role models.