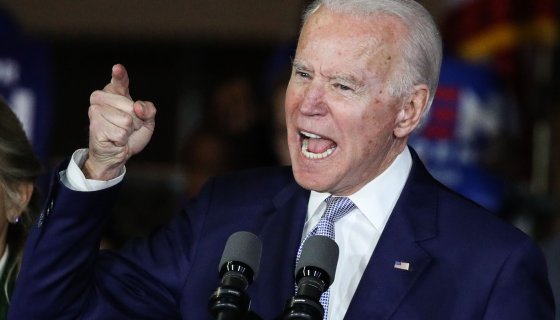 was already skating on thin ice with some Black voters due to some of his earlier policy stances and that foundation undoubtedly shakier today. During an interview with , the former vice president made what appeared to be an ill-timed joke stating that Black voters should question their race if they vote for President Donald Trump over him.

During the chat with The Breakfast Club, Biden attempted to make an appeal for the Black vote as is expected of one running for presidential office on a Black media outlet. During the chat, Biden discussed having a Black woman stand as his running mate, his stances on marijuana decriminalization and legalization, and the state of the Democratic Party as it relates to Black voters.

Biden then adds after looking at his wristwatch, “If you have a problem figuring out whether you’re for me or Trump, then you ain’t black.”

In somewhat poor form, Biden continued to make his plea to Black America by calling on voters to check his record and touted his endorsement by the NAACP.

The quip from Joe Biden has garnered quite the reaction across social media, namely Twitter, with the hashtag #YouAintBlack beginning to trend. Some have also blasted Charlamagne by saying he doesn’t represent Black media. We’ve got reactions from all sides, including MAGA and Black Twitter, below.

Joe Biden, you ain’t black, so what gives you the right to decide on other people’s blackness?#YouAintBlack

#YouAintBlack Joe Biden," Come on man, you know what I mean. I mean if you don't vote for me you ain't black." Not that other thing I said, Man.

POWERFUL WORDS from @HARRISFAULKNER in response to Joe Biden saying Black Americans aren't really Black unless they support him:

"I’ve been fighting against this notion that you are not Black enough unless you think a certain way, you vote a certain way… my whole life." pic.twitter.com/5lhmI7XRBq

I’ve had my “black card” revoked many times in my life, but never by an old white man.

Joe Biden’s comments demonstrate how Democrats take Black votes for granted. It’s sad how often Democratic candidates become indignant when asked about an actual Black agenda. His response, whatever his intention, was reflective of a broader and deeper problem.

#YouAintBlack if you aren't pissed off at what Joe Biden said.

Let me know when Joe Biden gets sued by the DOJ for racial housing discrimination against black people.

Until then, I'm voting for Joe Biden! Fuck Donald Trump.

What’s truly incredible is how obvious the floodgates currently opening against @JoeBiden by Trump and GOP were—progressives SCREAMED iceberg right ahead regarding his laundry list of a terrible record that GOP would seize on and now… https://t.co/EOb3bRYWyo

Today is going to be one of those days when hordes of white progressives tell black people how they should react to Joe Biden and it’s clear that nobody learned anything from the 2020 primary season.

Did Joe Biden learn nothing from Lana

No. 1 Fcuk #YallsPresident. No. 2 Joe, you need to do better than this Breakfast Club interview. Clearly Joe Biden needs 2020 Black cultural competency training. I know he thinks he has the BlaacKkkkszz, but at 81% support (-3 pts) he has to come better to us than "Come on man". https://t.co/GWkUM5JTgD pic.twitter.com/i6yvpvXSyQ

Joe Biden is apparently the aribiter of Blackness.

The same Joe Biden who:
📌 Lied about marching in the Civil Rights Movement
📌 Lied about being arrested in South Africa
📌 Opposed desegregating schools
📌 Wrote the ‘93 crime bill
📌Is bffs with racists#YouAintBlack pic.twitter.com/44gaM1Yg7w

The first black president in history could have chosen anyone to be his VP. Barack Obama chose Joe Biden. You can call Biden whatever you want, but one thing is for sure, #JoeBidenIsNotRacist!#DonaldTrumpIsRacist! The #JoeBidenIsARacist hashtag is another pathetic smear.

Joe Biden said what on the Breakfast Club ? pic.twitter.com/1LuCpJi5sz

OMG. Just watched the Joe Biden saying #YouAintBlack clip and am more than ever convinced the Democratic Party has just become an arm of Trump's reelection committee, playing the foil WWE-style. Because there is no way they're aiming to win with this idiot.

What gets me about the Biden Breakfast Club interview is that it’s a microcosm of how black voters are silenced.

His #YouAintBlack comment came right after Charlamagne says he has more questions. The mere implication that Biden has to work for black votes made him defensive.

If Bernie wouldve said #YouAintBlack …..he would've been crucified 3 times….and twice on Easter

me listening to the Joe Biden #youaintblack comment on that interview w/ charlamagne pic.twitter.com/0DbFzb4OlV

Does @JoeBiden think it's such a good idea to tell people to look at his record?

His record is littered with racist policies he supported. The more you dig, the worse it looks.

I wonder what Charlamagne thought when BE Joe Biden broke out in his #YouAintBlack routine. pic.twitter.com/ib5giC7ltz