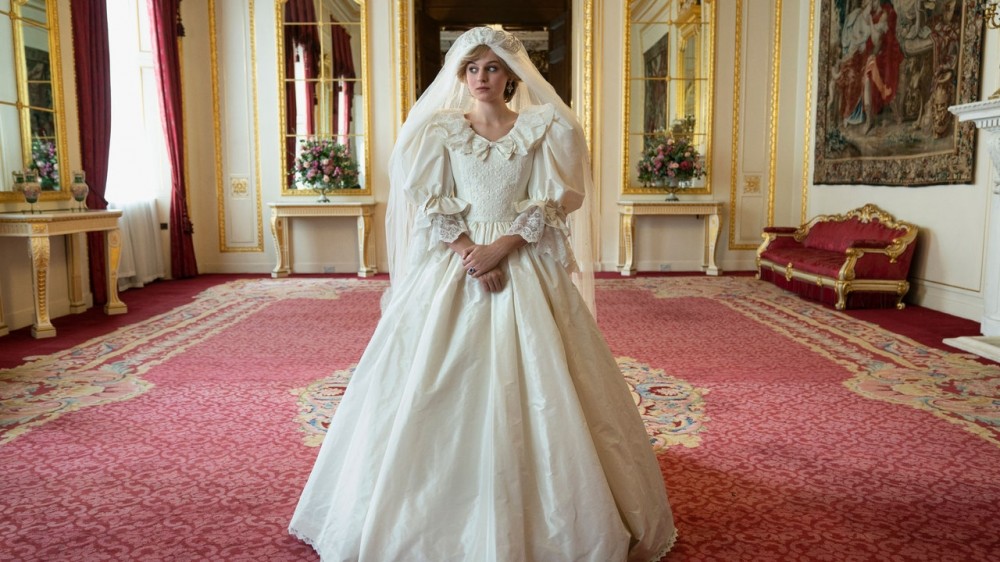 What's better than enjoying the beauty of Netflix's The Crown from the comfort of your couch? Getting a 360-degree view of those epic costumes that lets you zoom in on Queen Elizabeth's suits and Princess Diana's wedding dress. The Brooklyn Museum's latest exhibit, "The Queen and the Crown," makes it all possible. The exhibit offers a special look at the clothing that features on The Crown and the streaming platform’s new chess mini-series, The Queen's Gambit. The kind of immersive concept that could only happen with the help of the internet allows attendees to dive deep into the history behind each piece, its period, and when it featured on its respective show. The opportunity presented for history buffs is unmatched, but even if you aren't a period drama fan, the event should hold appeal. With many museums still shuttered due to coronavirus concerns, the entirely virtual format allows guests to enjoy a new experience in a familiar setting. "All museums are looking for ways to have art conversations and interactions with people who aren't venturing out much yet," says Brooklyn Museum's Senior Curator, Fashion and Material Culture, Matthew Yokobosky. "It also allows us to engage with a much more national and international community."

Displayed in a virtual version of the museum's airy Beaux-Arts court, a beautiful space with glass windows and an excess of natural light that would be impossible to use as a gallery space for the delicate costumes in real life, the costumes are placed in an automatically surreal setting. "It's an extraordinary design," says Yokobosky. "To me it's the perfect space for a virtual exhibition, and the programmers have designed everything in a way that lets you navigate seamlessly." Freed from the rules that generally impact showing fashion in a museum, Yokobosky and the programmers were able to create an experience, unlike anything they'd done prior. "As we were designing, I would say things like 'well this has to be on a platform because normally you wouldn't be allowed to get close to the garment,' but then you have to remind yourself that isn't an issue," says Yokobosky. "The beauty of a virtual exhibition is that you can get as close as you want, you can magnify and view from every angle. The technology has become so sophisticated there aren't limits."

But aside from the surreal, virtual exhibition space, the costumes highlighted hold their own. The Queen's Gambit may be the newer project, but with its 1950s and early 60s costumes and exploration of elegant destinations, it's a visual treat, especially given the current travel restrictions. In telling the story of Beth Harmon, an orphan-turned-chess-master played by Anya Taylor-Joy who electrifies the game's male-dominated scene, recreates the mood of an era while providing insight into the protagonist's troubled mind. "She comes from this poor background and an orphanage, where she didn't have a context for fashion, so it's something she's had to discover on her own," says costume designer Gabrielle Binder. "I always tried to have her be outstanding and different from everyone else around her, whether at school or in [chess] where all the other players are men."

The complexity of the period's gender dynamics and Beth's eventual descent into addiction had to be worked into Taylor-Joy's costumes, several of which had multiple versions depending on the scenes’ level of tumult. "That was fun because there's one side of her is glamorous and another that is destroyed," says Binder, who referenced designers like Pierre Cardin and Saint Laurent while creating. "We have a dress that is very Cardin, but it's created in this fabric that is too heavy, instead of something that would have been used during that era. We wanted to show how Beth's life had gotten too heavy." The drama may be intense, but Binder allowed for fun moments and a playful chessboard motif that carries through Beth's entire wardrobe. "There is no perhaps in chess. It's about contrasts: black or white, win or lose," she says. "I thought we needed that minimalism and the ’60s have so much of that in looks from Mondrian, Cardin, and Saint Laurent. I wanted to connect the fashion with the game because it's the most important thing in her life, and she would intuitively seek out [clothes] that mirror it."

The enduring appeal of The Crown’s latest costumes is self-evident. Because from the moment the forthcoming season of The Crown was announced, there was one question on everyone's mind: how would the series approach Princess Diana, played by newcomer Emma Corrin? The iconic royal's story is explored in great detail, tackling her journey from teenager to global sensation throughout 10-episodes. Tackling such a well-known figure and well-documented period came with specific challenges. “I'm a big believer in doing all your homework, doing all your history lessons,” says costume designer Amy Roberts. “Then you just chuck that out the window [because] you have to bring something of yourself as a designer as well, but it's grounded by that knowledge.” Roberts and her team compiled walls full of inspiration boards for each character outlining the looks for Queen Elizabeth, Margaret Thatcher, and Diana before moving on to creating sketches and selecting fabrics. For Diana's transformation, the clothing choices were especially crucial as they conveyed her growing confidence and cultural clout. "She doesn't kick-off as the glamorous creature. In our story she starts as this little 19-year-old with no sense of style or dress sense [because] why should she," says Roberts. "She gains that throughout the narrative, but I think that Diana that everyone knows will happen next season, we only touch on it at the very end."

Gillian Andersons' Margaret Thatcher was the season's biggest disappearing act. Tasked with embodying Britain's first female prime minister, Anderson had to capture Thatcher's distinctive speaking voice and the physicality of a woman older and considerably taller than she is. Roberts’s costumes gave Anderson "gentle padding" and a 1980s makeover complete with all the shoulder pads and severity associated with the decade. Roberts avoided the prosthetics and padding used on screen to turn Gary Oldman into Winston Churchill for Darkest Hour or Russell Crowe into Roger Ailes for The Loudest Voice. “I don't think that is what The Crown is about,” says Roberts. “For me, it's a nod to the people, but not their spitting image, drama, not documentary. So our Thatcher is incredibly chic—the suits are fabulous.”

Thatcher may be tailored to perfection, but the season's pièce de résistance is a recreation of Princess Diana's Elizabeth and David Emanuel designed wedding dress. The ultimate princess fantasy gown, its 25-foot train and puffed sleeves influenced a generation of bridalwear. Roberts remembers the original piece and the excitement around the nuptials fondly. "I took the day off of work and watched on television," she says. "I thought ‘what do I remember about the dres’' as it's my job to give people that [feeling]. It was to my mind every little girl's dream of a princess getting married. When she stepped out of that gold carriage, this feeling appeared, it was like a butterfly coming out of its cocoon." To replicate that, Roberts and her team consulted with David Emmanuel to ensure the details were just right. "He came to meet us and brought a copy of the original he and Elizabeth had done," she says. "He was so generous. He wasn't precious about it and didn't say ‘oh, if you don't get that right, it will be [disastrous].’ He was just fantastic and funny."

Naturally, the moment when the dress was unveiled was emotional for Corrin and the entire crew. "When Emma walked on set in the dress to film the scene, the stage just went quiet," says Roberts. "Everyone was silent. It just stopped people in their tracks. It was moving [but] almost spooky, and Emma had to fight not to cry because we all know how this story ends, and it's not a happy ending."

Both The Crown and The Queens Gambit tell stories of boundary-breaking women whose lives helped to define their eras and for Yokobosky, which made them ideal representations of the Brooklyn Museum's ethos. "The first thing that was appealing was that each story has a strong female lead," he says. "Brooklyn Museum had the first feminist center in the United States with the Sackler Center for Feminist art, and it fits within the context of our mission to highlight work by women and positive narratives by women." Placing the costumes alongside art pieces he selected from the museum's permanent collections also adds another layer of understanding. "What I love about fashion is that it says something about where things are culturally in a society," says Yokobosky. "Why did our culture at that time feel the need to have this silhouette? It's interesting to look at the relationship between style, jewelry, accessories, and the works from the permanent collection that tell similar stories in different mediums—it makes for a richer experience."