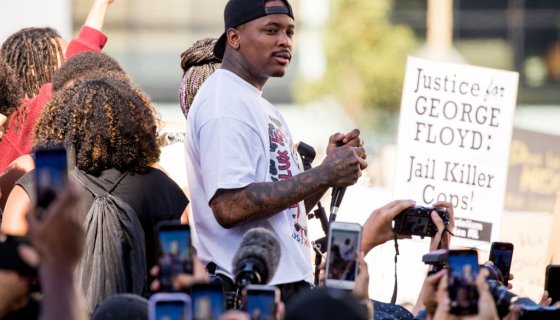 is serious when it comes to snitching, so when teamed up with proud snitch for their , the Cali rapper says he’s done working with her.

During an interview with Los Angeles’s 92.3 The Real on the Bootleg Kev and DJ Hed show, YG made it plain that he sticks to the street code and would no longer be collaborating with Nicki Minaj after she .

After The Shade Room posted the aforementioned clip from the interview, 6ix9ine couldn’t help but pop up in the comment section to weigh in on the decision from his public adversary, jokingly writing that Nicki “messed up”, based on YG’s response.

The move by YG to disassociate himself from Minaj after the collaboration isn’t surprising after the two rappers’ previous feud. Prior to 69’s brief incarceration, YG used 6ix9ine’s mugshot as the background visual to his concerts, before dropping the track “Stop Snitchin’” inspired by the rainbow-haired artist.

Also during the interview, YG shared his opinion on , noting that he plans to vote for the iconic but eccentric rapper.

After receiving the news that Kanye had yet to file the paperwork to be a legitimate candidate, YG jokingly added that he would vote for Dwayne “The Rock” Johnson also because he’s his “childhood hero.”

Check the full interview below.