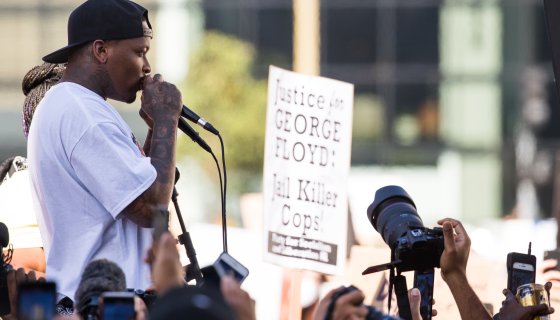 is opening up about his during his recent arrest in Los Angeles days before he was scheduled to perform at the Grammys in January.

Earlier this week during his interview with online radio show, The Morning Hustle, YG touched on the incident, revealing that while he was being arrested the police not only had their guns drawn on him but the entire family that was with him at the time.

“Around the Grammys, the police raided my house while I was there with my family and my kids,” YG recalled. “They came at like four in the morning when everyone was still sleep, they had the helicopter going around and everything so I hopped up to see what was going on. So I open the door and boom they draw down on me, which is normal, but my kids at the time were 4 years old and 6 years old at the time in the room with their mom.”

The “Big Bank” rapper then states that at the time when police entered his home with their weapons drawn, he advised them his children and their mother were upstairs but that didn’t stop the team of officers from pulling the high caliber weapons on them in their home leaving them visibly shaken.

“So I tell them that my kids are up there and they still go up there with their guns drawn and putting these big AKs in my kid’s face yelling and telling them to get on the ground,” YG continued. “So now at this point I get mad and start wildin’ because they had me f*cked up for going after my kids.”

Although the potentially traumatic situation ended peacefully, YG said the incident was to be expected based on the previous lifestyle choice he made.

”As far as the police, I am not worried about them,” YG said. “It’s just a part of the game when you choose certain lifestyles you know the police are going to f*ck with you.”

#YG goes into detail about the traumatizing raid when police came into his house guns drawn on him & his family earlier in the year.

If you missed it this morning, check out the full convo w/ @headkrack @billysorrells @StarringLoreL & @YG

In addition to speaking on his own experience with police, YG also took a moment to talk politics weighing in seemingly endorsing the super producer as a ble candidate.

”Listen, the thing about every choice we got is they all are crazy, but folks just want to jump on Kanye,” YG said. “He knows his mind is messed up and he says it and that’s wha got people scared, but Trump’s mind is f*cked up too. Biden’s sh*t probably f*cked up too and we just don’t know it.”