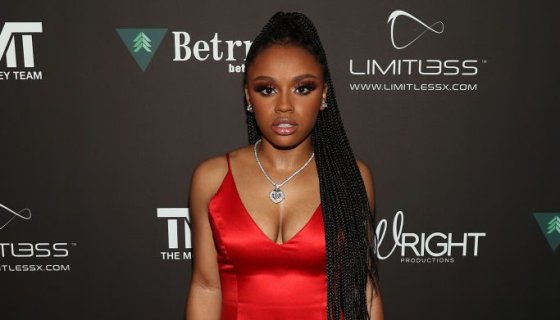 seems to attract a lot of drama for some reason, as evidenced by the arrest of his girlfriend, Yaya Mayweather. The daughter of Floyd Mayweather is in a Texas jail after allegedly stabbing one of the mothers of the Louisiana rapper’s child early Saturday morning.

TMZ reports that Mayweather, full name Iyanna Mayweather, is sitting in a Harris County prison cell after an incident at NBA YoungBoy’s home. According to the outlet, a woman by the name of Lapattra Lashai Jacobs was at the residence with YoungBoy when Mayweather came inside stating that she was his fiancee and Jacobs should leave. Mayweather claims Jacobs physically accosted her, then ran into the home where the fight would continue.

A verbal back and forth apparently ensued, which got violent inside the kitchen where the outlet adds Mayweather was holding two knives. Jacobs says that she charged Mayweather, who reportedly stabbed her twice. Jacobs’ condition is not known at the moment. YoungBoy, 20, has four children and among three women. It hasn’t been shared in TMZ’s reporting which of YoungBoy’s children Jacobs is the mother of.

YoungBoy was cuffed on the scene as a precautionary measure but was not charged with a crime. The couple has been in the news recently with YoungBoy reportedly getting on a pilot’s bad side on a private jet for smoking marijuana inside the cabin with Mayweather in tow.

As a result of the news, Twitter has Yaya Mayweather’s name trending as expected. We’ve captured some of those reactions below.

Youngboy just upped the score with that Yaya shit…

i see a bunch of Yaya's calling Yaya dumb😭 pic.twitter.com/T9EfDX22ND

as far as i’m concerned, NBA YoungBoy is cancelled and has been cancelled since I saw him slam Jania in that hotel hallway when she was pregnant with kacey. yaya is a grown ass woman, sure, but at some point, y’all gone have to see how that man do women🤮🤮 pic.twitter.com/UqATtjtV3i

Yaya Mayweather when she sees NBA during her court hearing pic.twitter.com/orDO35hZAd

yaya going out sad she should’ve listened to meg🤦🏽‍♀️ pic.twitter.com/IEvYtqUKPJ

floyd when yaya call him from the county jail😂 pic.twitter.com/ENCKY0wgoq

Bhad Bhabie was fighting Malu over this man and got a tattoo of him on her body. Was stressing out Jania. Had his other baby mommas fighting one another. Got Yaya tryna KILL one of his baby mommas allegedly…. I’m- pic.twitter.com/P1kS80fS84

Yaya going back to stab that girl after Youngboy kicked her out pic.twitter.com/QzP3Qsv2Vl

I still can’t believe that Yaya Mayweather just stabbed a bitch over a Nigga with 7 baby mommas and HERPES🙂 pic.twitter.com/jwN8fSHEmn

There’s no amount of love or dick worth going to jail for.#yayamayweather #yaya pic.twitter.com/um6LIS0squ

imagine your dad being a whole billionaire and you stabbing someone over a nigga who got 5 kids, herpes, and ain’t even allowed to DRINK YET?🤨 #Yaya pic.twitter.com/koNwaM5C7j

When the jury go to the the room to make a final decision on Yaya Mayweather future, this is what they gonna see in the hall: pic.twitter.com/rQRLtTLxos

Let me get this right , Yaya ( Floyd Mayweather’s daughter ) is going to jail for stabbing a girl over her boyfriend youngboy nba ? A guy with 30 kids and drama … your dads a millionaire and you lost it all over a nigga ? Log out for me baby .. please pic.twitter.com/yrEOWGONcL