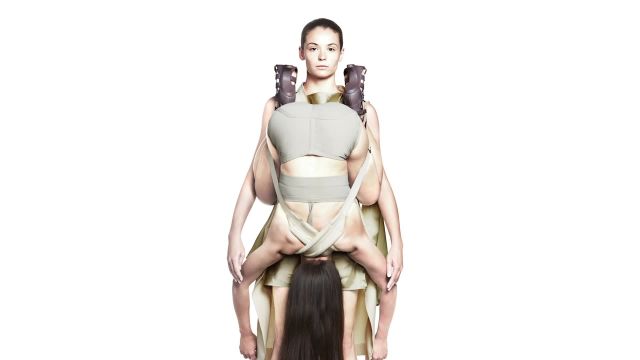 Not to be hyperbolic, but it is near impossible to isolate a single runway show as Rick Owens’s best ever. There were the pantless men, the punk band suspended from the ceiling, the bubble-topia in homage to his Mexican heritage, and the olden days of draggy hemmed waifs parading through Paris. Just three weeks ago he carted his team to Venice’s Lido for a totally twisted romp through hell, tinged with some Death in Venice obsessions and a bit of Pepto-pink liberation. The longer you think about it, the harder it is to choose.

Still, when we began speaking with Owens and his team about a Best Show Ever video for Vogue Runway’s ongoing series, his spring 2016 womenswear show came to the fore. Titled Cyclops, the show was memorable for its human architecture: After four austerely body-conscious looks a model came out onto the runway with another model strapped to her back. She was followed by a dozen other fused-together women, some back-to-front, others upside down. The initial reference was Leigh Bowery and his wife Nicola Bateman woven together into a topsy-turvy pose and photographed by Annie Leibovitz, but it quickly evolved into a larger statement about womanness. “There were references to birthing, references to aging, the cycle of life,” Owens says. “Then, you know, I stuck a couple of high heels on the girls being carried just because it was funny.”

“I remember there was one review that said something about how it was difficult seeing the strain on the women’s faces who were being held upside down, but these were athletes. I didn’t make our model community do this,” he continues. “And that strain is part of the burden of carrying people and being part of a community. I think I’m very satisfied with that element of strain.”

Held in the Palais de Tokyo on October 2, 2015, the show was also a turning point in fashion at large. Spectacle shows were becomeing the norm from the megalithic brands and the idea of “stunt casting” was reaching an apex. Owens never really dealt in that—well, if he did he did it in his own way, refracting fashion’s growing theatricality with a sensitivity and artfulness. “This was theater, this was poetry, this was a statement,” says Eska, who performed a rendition of “This Land” by James Lavelle at the spring 2016 show.

For those who were there, the simple but provocative gesture of fused together women’s bodies remains poignant. “Being at Rick’s shows when he creates moments like these, you know you’re a part of history,” says photographer Danielle Levitt, who has worked with Owens since 2014.

“This is the kind of show that people would be clamoring to see Rick afterwards with so many questions: What does it all mean?” recalls Nicole Phelps, Vogue Runway’s global director. “It felt like a tribute to women’s strength, and as a woman it was hard not to walk away and feel empowered and full of optimism and joy. I would say in general that’s how I tend to feel when I leave a Rick Owens show.” Like we said—hard to choose a favorite. Here, Owens, Eska, Levitt, Phelps, and others remember the power of Rick’s women supporting women.

“I Am Probably Getting Closer to Sexuality, Just Because It Seems the Opposite of Self-Pity” —Rick Owens on Today’s Good Morning Vogue