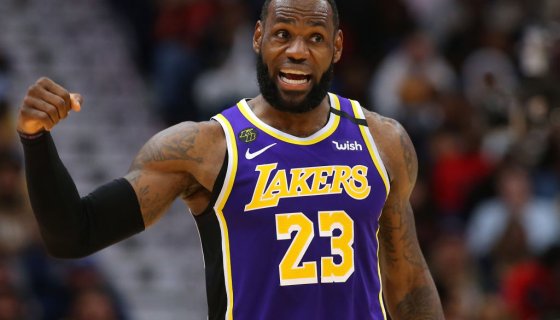 When the NBA first announced that it was coming back, were worried resumed play would take away the focus from social justice matters. and other players are making sure that is not the case.

LeBron James returned to NBA action Thursday (Jul.23), and he definitely didn’t look like he was home just chilling. Following limited work that saw the King score 12 points and dish out 5 assists in during a tune-up game against the Dallas Mavericks, James made it very clear that his focus is not just on winning a chip, but calling for justice for .

Bron demanded that the officers who took Breonna Taylor’s life after executing a no-knock warrant be brought to justice while answering a basketball-related question.

“First of all, I want to continue to shed light on justice for Breonna Taylor and to her family and everything that’s going on with that situation.”

“We want the cops arrested who committed that crime. In the state of Kentucky, what’s going on down there, I know a lot of people are feeling the same. Us as the NBA, and [as] players, me as one of the leaders of this league, I want her family to know, and I want the state of Kentucky to know that we feel for her and we want justice. That’s what it’s all about. What’s right is right, and what’s wrong is wrong.”

When asked about playing on a court that has rally cry on it, Bron pointed out that he doesn’t see it as a movement but as a “lifestyle” that Black people have been living their entire lives.

“A lot of people kind of use this analogy, talking about Black Lives Matter as a movement. It’s not a movement.”

Even though Bron is getting the most attention, he is not the only NBA player who has used their press time to call for the arrest of Breonna Taylor’s murderers. Philadelphia 76ers star Tobias Harris, Los Angeles Clippers forward Paul George, Boston Celtics’ guard , Milwaukee Bucks swingman Sterling Brown, Toronto Raptors guard Terence Davis all have spoken up about Taylor. LeBron’s teammates Alex Caruso and Kyle Kuzma also have kept the focus on Breonna Taylor.

If you were worried the NBA and its players were just gonna shut and dribble, you were sadly mistaken.