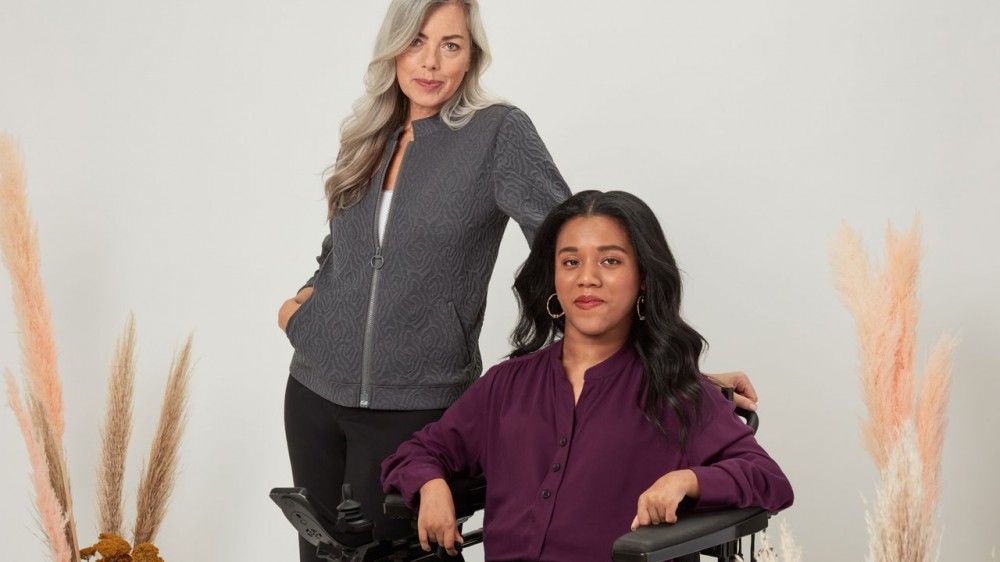 There are plenty of e-commerce destinations, but Juniper Unlimited is one of a kind. As the first online shopping site dedicated to products for people with disabilities, health conditions, and caregivers, it provides much-needed essentials to a market that has traditionally been ignored by fashion. Launched earlier this month by activist and author Sinéad Burke and MagnaReady inventor Maura Horton, it’s the sort of passion project that propels the industry forward. This week’s debut of Yarrow, its in-house adaptive apparel line, is a sign of things to come. Powered by MagnaReady’s patented closure system, it focuses on cozy, softly draped pieces that are easy to layer while also allowing people with limited dexterity or mobility to get dressed with dignity.

Horton’s MagnaReady technology was born out of necessity. The wife of the famed college football coach Don Horton, she realized the need for clothing that could open and close without buttons and zippers when her husband was diagnosed with Parkinson’s disease at age 48. “After a game, he was stuck and trapped in a locker room, unable to get dressed to catch the team plane to come home. And a player by the name of Russell Wilson, who now plays for the Seattle Seahawks, saw him struggling, and went over in silence and just helped him get dressed,” she shared on the phone from Raleigh, North Carolina. “When my husband came home, he said he had had a hard day. I thought it was because they’d lost the game. Like most football coaches’ wives, we live and die by the wins and losses. But when he told me that story, there was this new humility in his voice that I had never heard before: the almost scared tone of an athletic man whose disease was starting to manifest and [who] was losing his independence.”

Horton immediately went online to see what options were available. At the time, the clothing offered was limited, shirts with Velcro fastenings made with cheap materials. Nevertheless, she placed an order. “When I received the shirts, both he and I were pretty disappointed,” she says. “Not only in the way they functioned, but the quality—I knew there had to be something better.” Inspired by the 2012 launch of the iPad and its magnetic covers that snapped into place, Horton experimented with different magnets to find one that could stand in for a traditional button or zipper. Though she eventually found a few strong enough, none could survive a spin in the washer and dryer. “It was back to the drawing board,” says Horton. “Eventually we created and patented washable clothing mechanisms that you now see in adaptive clothing. It started with one shirt in two colors, and quickly we realized that we were onto something much bigger.” The easy-to-use and waterproof magnetic closures that Horton developed are now used on a variety of clothing.

MagnaReady grew steadily, expanding into an array of workwear in the Brooks Brothers business casual vein. Still, when her husband passed away in 2017, Horton found herself at a crossroads. “I wasn’t sure that I was still in it emotionally, because it’s a constant reminder of his challenges in life,” she says. “When I partnered with Li & Fung, Global Brands Group, I decided that with them as partners, it would be much easier and better for us to do this together. I applaud them in taking the leap of faith, championing the cause, and creating new products that can help so many.”

Yarrow grew out of Horton’s new partnership. The line brings adaptive technology into womenswear, while introducing several new, functional designs and seamlessly fitting in with 2020’s fashion philosophy. The cozy cotton knits were made for working from home, and it’s easy to imagine the skinny jeans and lightweight dresses being worn on a socially distanced outing. The pieces are understated and minimal on the surface, but a great deal of thought went into their creation. “We wanted Yarrow to be traditional, high-quality dressing, just with different access points and more ways to get in and out of the clothing,” explains Horton. “The quality of the fabrications was paramount as was its [wearability] for different abilities.”

To ensure this, Horton enlisted the talents of designers with a personal connection to the project. “I’m excited that we were able to empower two designers during this process, one who is a seated body user who uses a wheelchair and the other whose father was diagnosed with multiple sclerosis,” she says. “They understood the challenges of limited mobility and dexterity. We wanted it so the designers themselves could weigh in on what is missing in the industry.” After some long conversations, the group settled on a list of core items that felt essential: pants and jeans that were comfortable for seated wearers, all-occasion dresses, and a piece made especially for caregivers. Created to address the needs of people who can’t dress themselves, it has access points that make the job of putting on and removing clothing easier for those caring for them. Each item underwent special testing to ensure its ease of use and durability. “There are lots of different checkpoints that we had to go off to ensure that we were designing correctly,” explains Horton. “The seated body pants were tested repeatedly due to the rise when you’re in a wheelchair. The back is very different from [ordinary trousers]. The seams have to be taken into consideration because they can become irritants if you’re sitting all day. We made sure there was a flat seam so that there wouldn’t be any problems; we put vents in towards the bottom of the legs to make it easier to get into and out of them.”

The 10-piece capsule collection is only the beginning. Yarrow will release seasonal drops in 2021, and Horton aims to expand the line to be of even greater service to its customers. “We’re going to continue to grow and use that consumer feedback; that’s the most important thing for us,” she says. “There are things that I’m super passionate about, but at the end of the day, we want to know what the customer wants. I come to this from a caregiver perspective because I helped my husband, but from the design community we’re going to have an active feedback loop so that people can say, ‘This was great, but if it functioned like this, it would be even better.’ The future is other people’s voices, not mine.”

That kind of listening is something the fashion industry could benefit from, especially as it pertains to making clothing accessible to all. “There are so many things that could be done, even if it’s adding a wider zipper pull girth, that would help so many,” says Horton. “Put a loop at the end of a zipper, and it can allow someone who only has one hand functional to be able to get dressed independently. We always say with adaptive clothing, ‘If you can do it with one hand, you’re on the right path.’ There are just so many simple changes, but people have to step back and look at it from outside their normal scope.”