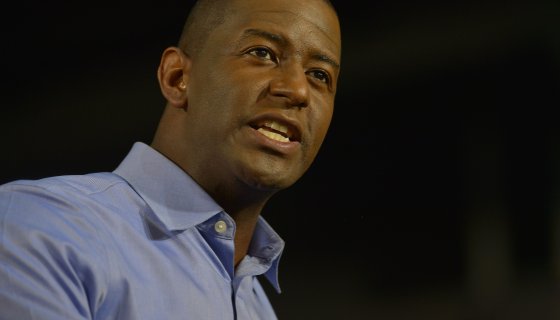 has placed his political career on ice. The man who came close to being Governor of Florida announced he is going to rehab after he was present in a hotel room where a man nearly overdosed.

It turns out that the aforementioned man was a 30-year-old gay escort who EMS was treating at the Mondrian South Beach in Miami on late Thursday night (March 12), according to the police report. It didn’t help matters that Gillum, 40, a married father of three, was reportedly too drunk to make a statement at the time of the incident.

Oh yeah, a small amount of crystal meth was also found in the room, so there’s that.

Then yesterday (March 15), right on cue, in a prepared statement Gillum said he was stepping back from public life, and going to rehab for alcohol abuse.

“After conversation with my family and deep reflection, I have made the decision to seek help, guidance and enter a rehabilitation facility at this time,” said Gillum in his statement. “This has been a wake-up call for me. Since my race for governor ended, I fell into a depression that has led to alcohol abuse. I witnessed my father suffer from alcoholism and I know the damaging effects it can have when untreated. I also know that alcoholism is often a symptom of deeper struggles. I am committed to doing the personal work to heal fully and show up in the world as a more complete person. I now need to firmly focus on myself and my family. I will be stepping down from all public facing roles for the foreseeable future. I want to apologize to my family, friends and the people of Florida who have supported me and put their faith in me over the years.”

At one point, Gillum was a rising star in the Democratic party and was a political analyst on MSNBC.

No more. However, the police department is reportedly not pursuing any criminal charges since the drugs were in plain sight and no one claimed ownership.

You had one job, Andrew.