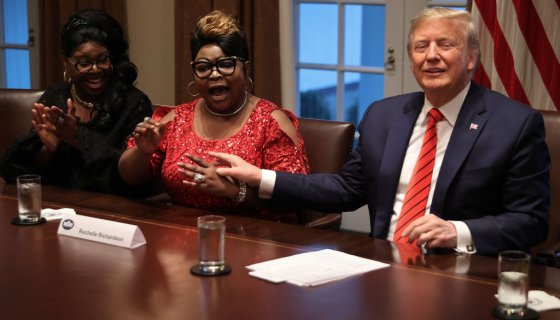 Lynnette Hardaway and Rochelle Richardson, better known as to the masses. made waves early on during President Donald Trump’s campaign and his eventual path to the White House. After enjoying fanfare as the former business mogul’s biggest boot shiners, Fox News cut ties with the duo after they continued to push a bizarre narrative that the coronavirus death toll .

The Daily Beast exclusively reported on Monday (April 27) that Diamond & Silk were given the pink slip from Fox and losing their show on the streaming service Fox Nation after promoting zany conspiracy theories surrounding the novel coronavirus spread despite neither woman working in public health or medicine.

“After what they’ve said and tweeted you won’t be seeing them on Fox Nation or Fox News anytime soon,” sources said to the outlet.

Diamond & Silk rose to fame after Hardaway, a lifelong Democrat, began making videos online decrying her former political ties and standing up tall for Trump. Richardson joined in on the act and the pair became celebrities on the heels of Trump’s approving of their content and giving the pair VIP treatment at rallies.

Since April 7, their weekly videos on Fox Nation haven’t aired and they’ve largely been absent from public appearances for reasons not yet known. It could be assumed that Fox News cut the ties back then but officials from the network have not made a statement regarding the split.

On Twitter, the reaction to Diamond & Silk getting the boot from Fox Nation and Fox News has been met with the expected slander.  Some on Twitter also noted that the trio of Tucker Carlson, Laura Ingraham, and Sean Hannity, all of whom have crossed some lines, are still employees of Fox. Sound about…white.

And in case anyone is wondering, they’re still tap-dancing and shuffling their feet for Trump as seen in this Twitter exchange below. We’ve captured reactions from the social media network below.

We Love You More! https://t.co/SygvkaoUY1

Serious question for @FoxNews:
why were Trish Regan and Diamond and Silk fired, but you allow Tucker Carlson, Sean Hannity and Laura Ingraham to go online and lie every night? Literally last night Ingraham was promoting hydroxychloroquine. This could be deadly.

LIKE I SAID YESTERDAY! I love my sister’s Diamond and Silk!

If You mess them You messing with me! We Trump supporters are a family
pic.twitter.com/IXpwdjMPTq

56,000 are dead and Trump is tweeting about Diamond & Silk. That’s bad. What’s worse is that on February 28th, when he should have been ramping up testing, meeting with scientists, spearheading PPE production, he hosted them at the White House to do this: pic.twitter.com/KmNNdfFOzH

Diamond and Silk were very mad about my "besmirch statements" and demanded correction or REMOVAL from everywhere.

Then told me I wasn't allowed to post this dumb ass shit they sent to me.😂 pic.twitter.com/KBO68AfVMQ

Of course you do…Diamond & Silk are boneheaded, stereotypical caricatures of how you and many of your followers prefer to see black people.

Just like YOU are a boneheaded caricature of how stupid people imagine a smart, rich man is.

looks like diamond and silk (explosive diarrhea and gout) got canned for spreading falsehoods. do you know how fucking crooked you have to be to get fired from fox for spreading lies?

Hey @DiamondandSilk, you may want to update your bio… I hear you got fired from Fox News for encouraging people to get coronavirus to prove it’s a hoax?

This might be the dumbest thing you two have ever said. Not only do I hate both of you, love never entered the picture.

Diamond and Silk
As two of our Women of Color, they always make a fool of themselves for Trump pic.twitter.com/6EHMKftrJS

Tokens are always the last to learn, the first to go.

It is good to know the President of the United States of America still loves Diamond and Silk and doesn't give a shit about 60,000 other Americans who died because of his Negligence Manslaughter. https://t.co/FYydtrzgdO

I see Diamond and Silk trending and the first thing that comes to my mind is the almond milk. the brand names.
I was disappointed when I checked to see what it really was about. pic.twitter.com/p7Qa2UiROt