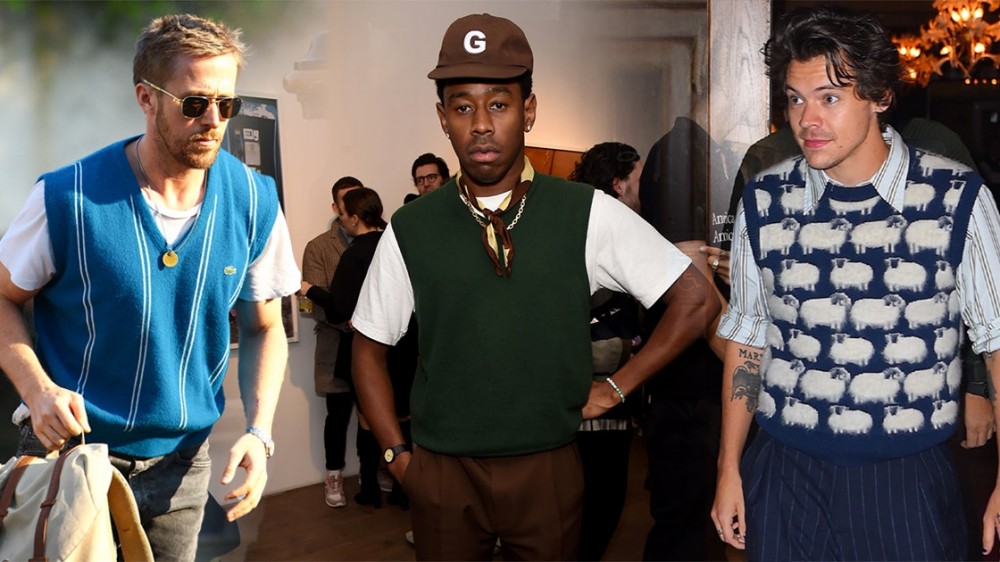 As the holiday season rolls around, it always feels like men are the hardest people to buy gifts for—whether it’s the dad who already has enough ties or cufflinks to sink a battleship, the brother who helpfully forgets to send you his wish list, or the boyfriend whose tastes seem to change with every passing day. And across the annual minefield of decisions while selecting the perfect gift, clothes can seem like one of the riskiest moves of all.

There’s something to be said, though, for the timeless, well-made garment as the perfect holiday gift: the item you might not buy for yourself, but that can be worn again and again and sits firmly outside of the trend cycle. It’s here that I propose the sweater vest as a great menswear gift. An unexpected choice? Possibly. The piece has been trending on the womenswear runways over the past few seasons, with brands from Prada to Ganni offering fresh updates on the typically grandad-core item. But it’s menswear return feels like more of a slow-burner.

Despite counting some of the most agenda-setting style icons as fans over the past few years—from Harry Styles in a Princess Di-inspired Lanvin number covered in sheep, to Tyler, the Creator’s typically flamboyant take on the piece for his label Golf Wang—its popularity across the broader spectrum of menswear has been slower to catch on. It’s possible the reason is the very different connotations sweater vests hold for men. Namely: the retired, golf-obsessed grandad in Florida, the middle-school geography teacher, and the weekend bird watcher. None of whom are exactly universally-acknowledged style icons. Worse, you could associate the sweater vest with its most recent revival in the form of the novelty Christmas sweater—in all of its gaudy, highly-flammable misery.

But it’s in these contradictory stereotypes that the beauty of the sweater vest lies. What unites all of the above is the versatility and unflashy practicality each figure listed requires of their clothes. The sweater vest ticks every box. It can be worn with almost anything: Slip a fair-isle knit over a gingham button-down for a riotous clashing print, or pair contrasting shades for a more quietly playful look. When spring rolls around, it’s an easy slip-on, slip-off garment that allows you to adjust to the fluctuating temperatures of these transition months. In the dead of winter, a thicker, sleeveless knit sits perfectly under a wool coat—while allowing the arm-swivel capacity to make snow angels, if you wish.

Admittedly, I may have a vested interest (if you’ll pardon the pun) in this divisive item, as a sweater vest obsessive. I’m not sure exactly when it was that the sleeveless knit became my daily uniform, but I can certainly remember the first one I ever bought: A vintage Missoni button-up I found in a store in Florence around ten years ago. I felt particularly extravagant dropping eighty euros or so on this glorious knit. As far as cost-per-wear goes, however, it’s more than lived up to its price tag.

I’ve worn it to parties, to meetings over coffee, to throw over my T-shirt for a bit of extra pizazz when going to buy milk in the morning when the temperatures have started to dip. Even when it quickly became clear it was the most useful piece in my wardrobe, it took me years to realize it, at which point I started building up my collection of sweater vests with a near-obsessive frenzy. (By my current count, I have 15.) Sure, I might not have any holiday parties to actually wear my latest jazzy sweater vest to—because of, well, the obvious—but the joy of the sweater vest is that its delightfully nostalgic air of festive cheer can feel just as palpable when wearing it home alone watching a Netflix series, as it would be among friends and family under normal circumstances.

Pausing for a moment and picturing your loved one unwrapping their new jazzy sweater vest on Christmas morning—only to find them asleep by evening after too many mince pies and mulled wine, perfectly cozy in their perfectly comfy knit—has a strange kind of comfort to it, no? At the end of the day, the ultimate holiday gift is the one that will be worn year after year. It’s my highly scientific—and not at all sentimental—belief that this selection of fashion-forward sweater vests will do just that.