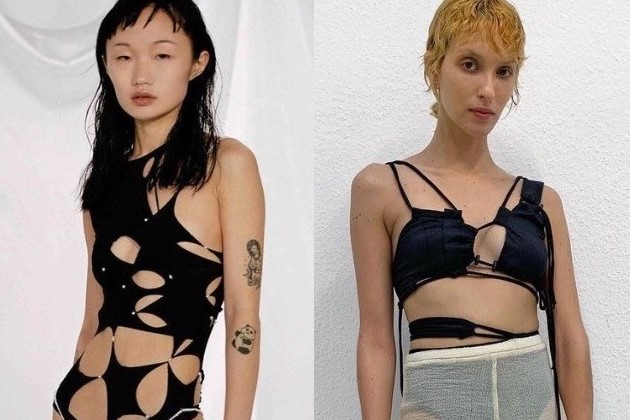 After a year spent in grimy hoodies and sagging sweats, sinuous, second-skin clothing is set to take over when we finally emerge from lockdown

Fashion didn’t predict the coronavirus, but even before the first drop of sanitiser was squirted onto hands, designers were toiling with what we would wear during the apocalypse. With Brexit looming, Trump stoking the flames of the far right, and actual fires engulfing huge swathes of Australia and Los Angeles, runways around the world were turning out oversized, technical, and utilitarian clothing, as the likes of Marine Serre, Craig Green, A-COLD-WALL*, and Balenciaga explored protective solutions for a dystopian future. Little did they know that the apocalypse would be seen out in grubby loungewear and stale pyjamas.

Bunkered down for who-knows-how-many-more months, designers now seem to be engaging with what we’ll wear once we’re out of the pandemic. Touch-deprived, embattled, and desperately bored, 2021 is all about fashion which acknowledges you’ve been through it, emerging from the rubble with its tangled cobwebs stuck static to your body. Think stretched, second skin fabrics, barely held together by sinuous strands of string and mesh. The kind of clothes that give a sense of everything falling apart, while desperately clinging on to some semblance of hope. Ringing any bells?

Cobwebbed pieces have been slowly infiltrating runways – and Depop – for a while now. Featuring in the SS21 collections of Charlotte Knowles, Ottolinger, Nensi Dojaka and Mugler to name just a few, the aesthetic just about reached climax when Dua Lipa stepped into a Rui Zhou iteration on the cover of Rolling Stone Magazine. These are flesh flashing designs indebted to the great Y2K iconoclasts – Jean Paul Gaultier, Galliano’s Dior and Gianni Versace – whose collections, alongside a dazzling embrace of sex, consumerism, and pop culture, were underpinned by the nihilism surrounding a dreaded doomsday millennium. Future anxieties laid bare on the body.

It’s a complete departure from the last few years of womenswear, which have been haunted by the ghost of old Céline. Phoebe Philo’s ten year tenure at the LVMH-owned label set the tone for an entire epoch in women’s style. Cloaking the body in smooth, sloping lines, Philo’s designs were enigmatic, cerebral but, most of all, sensible. So broad was Céline’s appeal, that it now seems a cornerstone of the millennial aesthetic, taking Philo’s elevated (clean, palatable, inoffensive) daywear and pumping it through the algorithm along with white hydrangeas, classic Italian furniture, and Sans Serif fonts. Knowing markers of a lifestyle that read, at least on Instagram, as ‘good taste’.

Unlike the somewhat bland reserve of old Céline, these new cobweb-like silhouettes are sticky and messy to look at, intentionally disorganised in the way the patterns have been lassoed around the body. Gone are the days of poetic tailoring and drapey fits: the new womenswear silhouette is skimpy, skintight, and hanging on by a thread. “We like the balance between asymmetric, free form, and straight lines,” say Crista Bösch and Cosima Gadient, the design duo behind Ottolinger. “It’s what happens in the natural world, like on a tree. Nothing is symmetrical yet the arrangement of the branches always looks amazing.”

“We like the balance between asymmetric, free form, and straight lines. It’s what happens in the natural world, like on a tree. Nothing is symmetrical yet the arrangement of the branches always looks amazing” – Crista Bösch and Cosima Gadient, Ottolinger

“(It’s changing) people’s perspective of what it means to dress as a woman,” says London-based designer Charlotte Knowles, noting our transition into a whole new era of body positivity and empowerment. Like Knowles, many of the designers turning out slinky, spidery pieces advocate for the feminine form in its many guises. “It’s about framing the body and pronouncing curves. We love to find forms which make the body look more beautiful and sexy,” says the Ottolinger duo. While this may have traditionally meant homogenising diverse body types into more acceptable ‘hourglass’ shapes, the focus here is on returning agency to the body. Or, in other words, ”the body shapes the clothes”.

That’s not to say that the cobweb isn’t sexy, though. Sex, for the first time in a while, is back on fashion’s agenda. Striking the balance between sexy and elegant, designers like Fashion East family member Maximilian Davis and Supriya Lele are behind collections full of revealing cut-outs, exposed straps, and loose hems suggestive of a permanent state of undress. Subtle hints as to what sex might look like, because right now… well, a year into a pandemic, and who knows any more?

As much as it shows the body off, however, this wave of sultry design can distort a silhouette as much as show it off. Lines that don’t quite trace the curves of the body, asymmetric spliced panels, and off-balance ruching deceive the eye into seeing more than is actually on show.

“One thing that is really important for us is to consider what exactly is revealed, it is always intentional,” says Knowles. “Our woman would never let anyone look at her in a way she didn’t want to be looked at”. Like Gaultier’s body-baring maille in the 90s (which many of these spiderwebbed pieces seem to reference) these designers speak to a certain brand of grunginess, which says you can look, but you definitely can’t touch. Be it the rough-hewn, reconstructed elements of Ottolinger or Knowles’ manipulation of fabric, which is often strapped across the body like armour, there is a hardness to these designs, taken from “what women wear to survive” as Knowles says.

For Ottolinger, this doesn’t come from some latent source of tension, but a focus on providing “a feeling of safety”. A sexy sentiment given the shit show that was the past year. As we head towards the summer, fashion is envisaging a hopeful future and, as we look towards life post-lockdown, readying ourselves to remove the PJs, it’s no surprise that this silhouette is already beginning to dominate. A cobweb, in the context of these young designers, is not only a symbol of optimism but a total reimagining of the expectations of womenswear. And this, after all, deserves to be enjoyed well within the boundaries of a 2m distance.