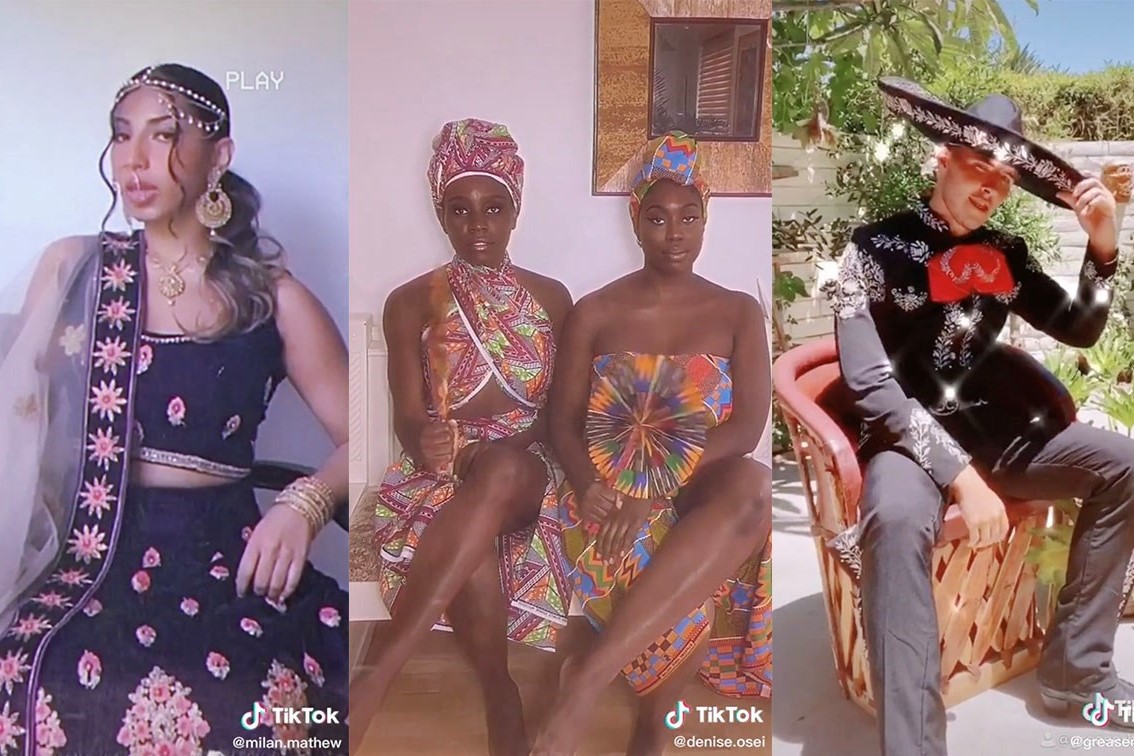 In late July, Milan Mathew uploaded a video of herself to TikTok. First appearing in a leopard crop top and black jeans, as she sits down on a well-positioned chair, her look suddenly switches. In her original outfit’s place is a pink lehenga from which matching bubblegum tulle spills, and a selection of traditional Indian jewellery, as Mathew lip-syncs to a mash-up of Amine’s “Caroline” and “I Just Did a Bad Thing” by Bill Wurtz.

Known as the #FashionEdit challenge, TikTokers start videos like these by wearing casual, everyday clothing. Upon sitting down, the beat changes and with it a swift visual transition reveals a spectacular outfit change. What first began as a means of showing off slick streetwear ensembles has transformed into a way for TikTokers of colour to revel in their cultural diversity – and it all started with Mathew.

“The day I made it, I saw three (videos) back to back and I had the song stuck in my head,” she explains over the phone. “On my page, I’ve always shown my American side next to my Desi side, so I thought ‘Why not do that transition?’ I put on my favourite lehenga, filmed this TikTok, and from there everything blew up.” To date, her TikTok has 11.4 million views and is being credited as the start of the second wave of the #FashionEdit trend that sees young users on the app celebrating their heritage.

For Denise, a 27-year-old Ghanaian woman living in Maryland, TikTok is exciting because it is “its own world; there’s specific songs, there’s particular dances, and it has its own influencers,” she says. In her #FashionEdit video, she appears with her Cameroonian friend Christane, wearing black leggings and white tees, before switching into vibrant Ankara prints. “I love showing off who I am and what I look like and how I can transform into this black girl magic, showing off my culture at the same time.”

Joey is a 20-year-old Mexican man from Anaheim, California. He’s proud of his roots but laughs when he says, “I do look very guero” – a word used in Mexico and in some South American countries to describe a person of a fairer complexion with blond or light brown hair. In his #FashionEdit video he wears a traje from the region of Jalisco, which is a modern take on the charro suit, a style of clothing based on the traditional horseman in Mexico. He loves using TikTok… for the most part. “What I don’t like about the app is that it’s very biased and people of colour are underrepresented,” he claims.

Back in April the Chinese tech company that owns TikTok, ByteDance, faced backlash when a spokesperson described its implementation of “collaborative filtering”. This is best described by Marc Faddoul, who, in a series of Tweets explained how if a user followed a white, blonde content creator, their subsequent recommendations would comprise videos by white, blonde content creators. “Social media has been known to create filter bubbles for political opinions,” Faddoul writes, but “TikTok seems like the first major platform to create such clear physiognomic bubbles.”

“I love showing off who I am and what I look like and how I can transform into this black girl magic, showing off my culture at the same time” – Denise Osei

A spokesperson from TikTok rebuffs Faddoul’s theory. “We haven’t been able to replicate results similar to these claims. Our recommendation of accounts to follow is based on user behaviour: users who follow account A also follow account B, so if you follow A you are likely to also want to follow B,” they explained. “TikTok is an inclusive space for positive, creative expression. Our community of creators is vibrant and diverse, and everything we do at TikTok is about providing a safe space for people to express their ideas and creativity, no matter who they are.”

Bay Area TikToker Guggin, 24, filmed his entire family including his brother and parents in their traditional Indian garb, in a hope that this trend “shows the world there’s more to India than stereotypes.” But those stereotypes persist on the app. As a Malayali woman, Milan, who is proud of her South Indian heritage, is remiss to not mention the hate pages that perpetuate harmful stereotypes or spew hatred in the comments section. “There’s a lot of hate towards Indians, not personally on my page but what I’ve seen is a lot of racist videos,” she says. “I feel like sometimes when someone finds it funny or let’s say, two people find it funny they feed off each other and it turns into a small community of hate.”

“Those people can be hard to handle,” Mary Grace, 18, says. The Baton Rouge, Louisiana teenager was inspired by Milan to create her own video showing her Vietnamese heritage. In her video she wears an Ao Dai, a long gown worn with trousers, which symbolises feminine beauty and pride. Like many first-generation immigrants, indigenous people, and Black folk, Mary Grace was bullied throughout her childhood for not being white. “My first language was Vietnamese but I learned English through school,” she explains. Over the course of her childhood, she tried to assimilate. “It wasn’t until my first trip to Vietnam that I started to really take in my culture by participating in cultural events, clubs, and expanding my knowledge – and I’m a lot more appreciative of my background now.”

Australian-Vietnamese content creator Elizabeth has a similar story to Mary Grace’s. She’s now travelled to Vietnam twice and embraces her background in her videos while adding her own twist. “I used a pun to lip-sync with the song,” she tells me, explaining how she replaced Amine’s lyrics (“thick as hell”) with “thick as pho” while waving packets of noodles like a fan. “People commented and said that my idea for it was iconic!”

Assimilation, cultural disconnection, and eventually embracing your heritage is a common thread amongst these TikTokers. As proud as she is today of her Ghanaian roots, Denise confesses that bullying in school made her want to “assimilate so bad”. “I just wanted to wear jeans and sneakers like everyone else,” she remembers. “I wanted to wear braids instead of my natural hair. I think a lot of us have that phase where you’re embarrassed to show off your culture because you’re afraid but as you get older, you come to an agreement with yourself that this is something to be proud of.” And somehow, that self-expression has found a home in this trend on an app that creators feel has its own issues with racism and appropriation.

In February, following the proliferation of the Renegade dance, TikTok influencers Charli D’Amelio and Addison Rae were asked to perform the dance during the NBA’s All-Star weekend. This effectively erased the creator of the dance, a Black 14-year-old from Atlanta named Jalaiah Harmon, from the narrative. On TikTok D’Amelio and Rae’s videos were pushed to the top of the algorithm, with no credit for Harmon – although all three later all met up and made a video performing the dance together.

“I feel like Generation Z is making a positive difference in diminishing racism. The trend has become a platform for education and empowerment through showing perspectives of different cultures and appreciating the beauty of ethnic fashion” – Elizabeth Le

Unsurprisingly, people of colour have repeatedly called the app out for this erasure, and for the racism they face on the on it – only to face more of the same. Black TikToker Tiahra Nelson experienced what she says is the inequitable treatment of creators of colour on the platform when two of her videos were removed after TikTok claimed they had violated community guidelines. In one of these videos, Nelson was speaking about her opinion on non-Black people using the n-word. In June, TikTok was accused of shadowbanning Black creators for calling out the algorithm-facilitated racism. Some reported being suspended and outright banned for exposing this culture on the platform. A few weeks later, TikTok pledged that it would be promoting Black creators through an initiative called the Creator Diversity Collective.

Even though Denise loves TikTok, as a Black woman she’s critical of what it’s doing to embrace its diverse range of users. “TikTok does introduce people to different cultures, but is it embraced as much as white people’s content is on TikTok? I don’t really think so,” she concedes, referencing the app’s algorithmic preferences. “There’s still some work that needs to be done and this trend was one of the few that I saw embracing international culture. I hope this is the first of many.” As important as this trend seems to be, these young creators are cognisant of the superficiality of trends; aestheticising BIPOC may celebrate how cool their outfits are, without going much further than that.

Despite the app’s shortcomings, Elizabeth remains optimistic that this trend and the attention it has garnered is a step in the right direction. “Seeing the historic trajectory of our society in how we have progressed with addressing social justice issues and embracing diversity, I feel like Generation Z is making a positive difference in diminishing racism. The trend has become a platform for education and empowerment through showing perspectives of different cultures and appreciating the beauty of ethnic fashion.”

Meghan, a 21-year-old Indian-American woman from Pennsylvania, is particularly interested in seeing how far this trend goes. Her contribution to the #FashionEdit – which has almost 3 million views – is one of the most candid iterations on the platform. Meghan sits in the back behind her mum and dad, as her parents dance, flex, and look as comfortable in front of the camera as their daughter – who has 40,000 subscribers on YouTube. “There’s still a lot of work to be done,” she laments. “It’s almost trendy in and of itself to comment on somebody’s culture or to recognise our culture or highlight the clothes that we’re wearing or how we look but I’m not sure if that’s sustainable in the long run. We need to be recognised as an important part of the world… as equally special.”