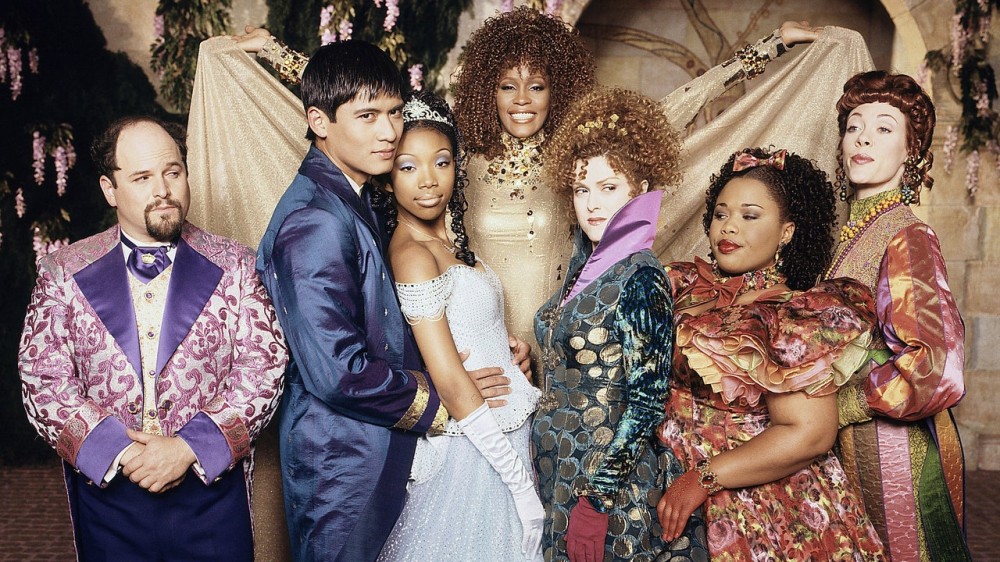 The tale of Cinderella has been told countless times, but for me, the best take on the fairy tale has always been Robert Iscove’s 1997 version. With such a wonderful, star-studded cast including the legendary Whitney Houston, Brandy, Whoopi Goldberg, and Bernadette Peters, it’s hard to believe it was a TV movie. Its fantastic costumes, original songs (scored by Rodgers and Hammerstein), and diverse casting infused the classic story with a fresh, new feel. Because of all of this, the film continues to have a devoted fanbase, even more than two decades after its release. If you’re intrigued, and haven’t had the chance to see it, you’re in luck: It will be available to stream (for the first time ever!) on Disney+ starting Friday.

When Iscove’s Cinderella was first released, it broke barriers. Brandy, a teen icon at the time, became the first Black princess in Disney’s history, giving an opportunity for young Black girls to see themselves represented on-screen. It was a choice not without its hurdles, however: “There was an executive at Disney—who will remain nameless—and he was very nervous about a Black Cinderella,” Craig Zadan, an executive producer, told Shondaland for an oral history of the film. The multicultural casting alongside Brandy only added even more representation into the mix, including the prince, played by the Filipino-American actor Paolo Montalbán. Houston as the Fairy Godmother, meanwhile, still remains one of Hollywood’s best casting decisions ever. The singer, who also co-produced the film, was originally supposed to play Cinderella, but eventually chose the Fairy Godmother role instead; it was her suggestion to cast Brandy in the lead.

Houston and Brandy’s song “Impossible” is the standout song of the film, mixing Brandy’s sweet vocals paired with Houston’s signature powerhouse sound. But even the smaller performances here are just as iconic, with Broadway legend Peters nailing the evil stepmother and Goldberg as Queen Constantina. What more could you want in a movie?

And then there’s the masterful costuming, which holds up more than two decades later. Costume designer Ellen Mirojnick, who managed to create marvelous designs on a shoestring budget. “We did not have a huge amount of money and we had a finite amount of time,” Mirojnick said in 2017. “Nothing could be wasted. It was a very economical production.” A look that lives on in my head is the one worn by Houston—a glittery, golden gown with crystal embellishment and a dramatic cape that she flings around with ease. It’s a look worthy of a true diva.

No Cinderella film would be complete without a blue, off-the-shoulder gown and matching opera gloves. Brandy shone in the dress, which nodded to the 1950 animated film. “I remember when she came in and tried it on for the first time, and it was heaven before me. I remember her swirling around, like you’d imagine Cinderella would. It was just a magic moment,” Mirojnick said of the design.

Another spellbinding detail about the movie’s fashions? The story behind Goldberg’s ensemble as Queen Constantina. We see her in ornate, velvety gowns—but it’s her fine jewelry that truly takes the cake. Many of the pieces are actually by Harry Winston that Goldberg herself specifically requested, and they’re worth a fortune, says Mirojnick: “Whoopi said, ‘No, my jewelry needs to be real. Here’s the person to talk to, go to Harry Winston, pick out everything that you want.’ ” If you have yet to see this fan-favorite, then, do yourself a favor and clear your schedule this Friday: The cast, music, and exuberant fashion are worth an instant watch.

How to Watch: Stream on Disney+

When you buy something through our retail links, we may earn an affiliate commission.