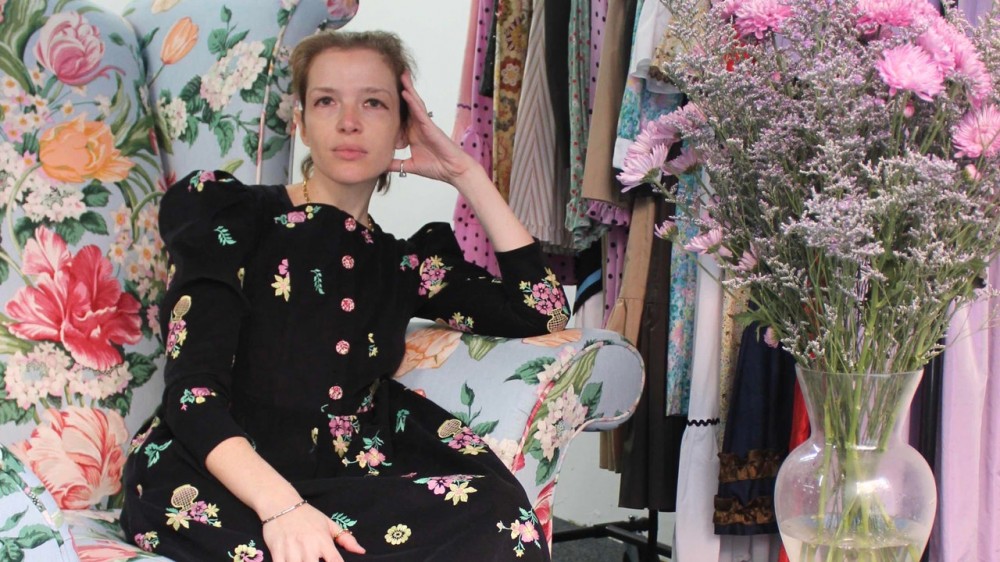 In one way or another, Batsheva Hay’s distinctive designs have always been about community—whether paying homage to the modest dressing of her Jewish roots, or the cult following Hay has amassed globally who have fallen in love with her delightfully frou-frou, retro-inspired tea dresses. Yet when the pandemic hit at the beginning of the year, Hay quickly immersed herself in another facet of her brand’s family that felt equally important: expanding the dialogue she’s steadily built up between herself and her customer.

This deeper conversation has led to a number of carefully considered side-lines for Batsheva as a brand over the past nine months—from hair clips made with deadstock fabrics, to a series of charming cooking aprons—and now, Hay is taking this one step further with her first foray into brick-and-mortar retail outside of a handful of previous pop-up stores. (For the time being, the store is planned as a pop-up, but if all runs smoothly, Hay is open to making it a longer-term venture.) It might seem an unlikely time to take the plunge, but for Hay, it felt strangely fated. “We were in negotiations on a lease for this space pre-COVID, and then everything quickly fell apart,” Hay says from her new store in Downtown Manhattan, where she’s adding the final touches to the space. “But over this year I’ve done a lot of fine-tuning and developing the business, and responding to what I literally see customers wanting—oven mitts, house dresses, and all the rest. And because these things are so personal, and I don't sell them in any mass retail environment, people want to see them in person.”

It also makes sense in light of the convincing arguments for the viability of in-person retail she shared with Vogue earlier this year—on the basis of drops in rent costs for retail spaces across New York, alongside the essential need for a sense of community so many are feeling. “A lot of what's for sale will be made in real-time and locally, so there'll just be little gems there,” Hay adds. “I really do like making things that just don't fit the cycle, and this creates a place where people can just discover them.” Clearly, there is a carefully-considered method to what might initially seem—on the surface, anyway—Hay’s apparent madness at setting up shop during such a tumultuous time for retail more broadly.

Alongside the archival dresses from past seasons and one-of-a-kind garments Hay will be selling as she opens her store today, there also sits a more eclectic range of homewares, art, and other knick-knacks. There are oven mitts and aprons in decadent lamé and moiré that retail for $50, as well as limited-edition sweatshirts and masks Hay has made with her team in New York; elsewhere you can find riotously colorful pieces by the artist Agathe Snow, whose graphic sensibility dovetails neatly with Hay’s love for print. Finally, there are mushrooms—yes, mushrooms—to be sold on the stoop by Snow’s sister Anne, who grows them locally in Brooklyn. What more could you want from your holiday shopping experience?

Still, in order to set up the store responsibly, Hay and her team have had to undergo a crash course in the laws and restrictions surrounding retail in the age of the pandemic. “It's been a quick education in trying to make sure we're up to speed on everything,” says Hay. “We're very mindful about it being a small thing for now.” It’s recommended by Hay that appointments are booked in advance, although there is still the option to drop by in person if numbers are kept to her required hourly minimum. Hay hopes that if there are enough visitors, her shop in Little Italy can also go some way toward revitalizing the small businesses that are suffering due to low footfall in the near vicinity. “Even if it’s just one or two people popping by to see something in person, this is such a perfect neighborhood spot for that, and will hopefully work as a small-scale, intimate holiday shopping experience,” Hay adds.

It’s a moment of uplift we could all do with right now—and one that Hay is hoping to share with a sprinkling of festive cheer in the form of her signature kaleidoscopic florals. “I know that right now, my biggest joy is going to like the pharmacy and getting a scrunchie, you know,” she adds, with a laugh. “So being able to have somewhere that you can physically go even just for a minute and feel inspired or joyful or whatever I think matters.”