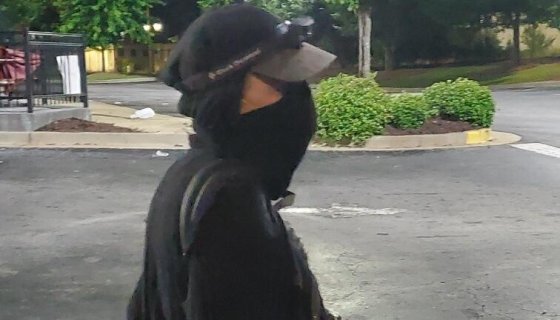 The murder of sent shockwaves through an already exhausted community, sparking more protests but police are looking for one woman who decided to take protests one step further.

According to published reports, police are looking for a masked unidentified white woman who they claim was responsible for burning down the location where 27-year-old Rayshard Brooks was murdered at the hands of police after falling asleep at the drive-thru

, Rayshard Brooks was shot dead by police officer Garret Rolfe in the Wendy’s parking lot after a Wendy’s employee called the police to say that someone had fallen asleep in his car in the restaurant’s drive-through lane.  An autopsy report ruled his death a homicide caused by gunshot wounds to the back.

The video of the murder was posted on social media over the weekend sparking outrage across the country. The video, which showed Brooks complying with officers before attempting to flee after the officers attempted to place him under arrest. Officers attempted to use a taser on Brooks, who was able to wrestle the stun gun away and run away, with officers in pursuit. Shots are heard but not seen in the video. Officer Rolfe, who officials said fired the shots that killed Brooks, was terminated from the department, with the second officer involved, Officer Devin Bronson, being placed on administrative duty. Atlanta’s police chief, Erika Shields, resigned over the shooting.

Brooks’s death comes during the third week of protests in the city, as demonstrators also decried the deaths of Floyd, Ahmaud Arbery, and Breonna Taylor, all at the hands of police or white shooters.