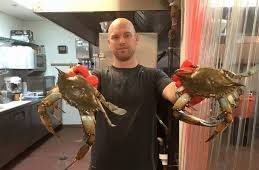 An interesting development related to the protests in support of , , Ahmaud Arbery, and others is how many racists have revealed themselves. Adding to this growing list is a white Maryland crab restaurant owner who has met swift criticism after making racist posts and offering a thin apology to boot.

The Baltimore Sun reports that Vince Meyer, the owner of Vince’s Crab House, a small local chain, has come under fire for making comments about the protests, in particular the looting and rioting that has taken place.

“There is one place I bet the protesters/rioters won’t light on fire or break into or even block the road to …. the social services buildings,” Meyer wrote on his Facebook page on June 1. This morphed into readers digging into Meyer’s posting past and found similar digs at the expense of Black people, including a tasteless barb aimed at Trayvon Martin after writing that he hoped Zimmerman wouldn’t be found guilty.

At the Middle River location in Baltimore County, and the Fallston location in nearby Harford County, Black protestors stood outside Vince’s Crab House with police guarding the buildings against entry.

Over the weekend, Meyer uploaded an “apology” that was just a second shorter than the time Floyd was on the ground under Derek Chauvin’s knee and used some of the common tropes of other outed racists of stating that he had Black friends growing up and noting that over three-quarters of his business comes from Black patrons.

“Obviously, my posts were offensive, and I can’t take them back,” Meyer said after reportedly addressing the protestors. “I consider myself really close to the black community, and it’s really hitting home.”

What’s really hitting home is that massive loss in revenue. Meyer told news outlets that he’ll be shuttering the doors to his five restaurants for nine days out of respect for Floyd.

Check out Vince Meyer’s apology video below if you must.