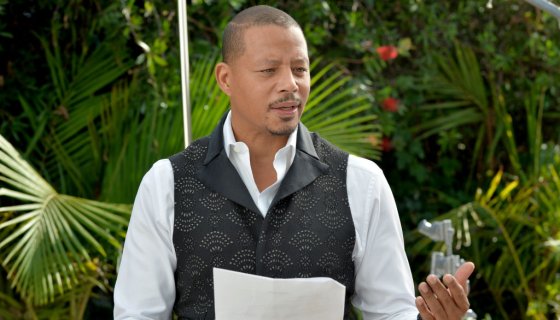 Cole Sprouse is a 27-year-old actor who came to fame playing Cody on Disney’s The Suite Life of Zack & Cody and current portrays Jughead Jones on The CW’s Riverdale—and he’s a white guy. So Twitter was quite confused when photos of Sprouse appeared where he resembled Black actor .

It began yesterday (May 20), when Sprouse shared photos from a shoot with photographer Alex Hainer. Maybe it was the lighting or a tan, but homie damn sure looks like Lucious from Empire, just saying.

Twitter immediately took note, and started asking questions and cracking a whole lot of jokes. Because…this is what Twitter does, .

Um can someone explain my Cole Sprouse, right, get this, LOOKS LIKE FUCKING TERRANCE HOWARD pic.twitter.com/X2O5t8BLdL

You can’t front, the resemblance is rather uncanny.

There is also a contingent of folk noting the Johnny Depp and Leonardo DiCaprio vibes. Peep some of the best reactions below.

Cole Sprouse to Terrance Howard when they wake up and see why they trending pic.twitter.com/a9eOp3yTIK

Yall got Terrance Howard trending because of Cole Sprouse pic.twitter.com/jaB6SipjH4

Me trying to figure out how Cole Sprouse looks like Terrance Howard. That photo shoot is 🔥 tho pic.twitter.com/jCwTi2JdwR

Is it Cole Howard or Terrance Sprouse? You decide 🤔😅😂. But Cole Sprouse does look like Terrance Howard here 😂 pic.twitter.com/TQqTKHkkIy

Everyone is talking about Cole Sprouse resembling Terrance Howard, and I'm over here wondering who the FUCK is Cole Sprouse?

Cole Sprouse and Terrance Howard when they finally meet pic.twitter.com/wS6VtFLQIB

SUN EATER. @HeavyMetalInk and I are finally ready to tell you more about Sun Eater! Full vid on Instagram but, this deeply personal tale is my first ever published work. I’m immensely thankful to everyone who supports. Presale is also live today! https://t.co/hgpWylaxOQ pic.twitter.com/eBq0erca5e