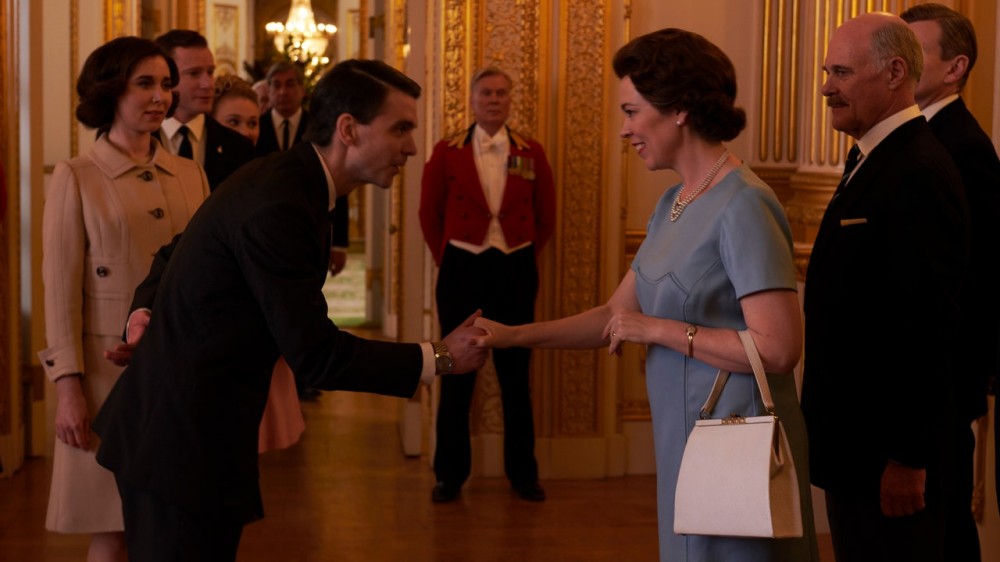 Like many around the world, I’m currently coming down from binge-watching The Crown on Netflix. This season brought the highly anticipated introduction of Emma Corrin as a young Diana Spencer in all her gorgeous, late 80s glory. Understandably, the internet has been ablaze since the show’s release with renewed obsession in her many stylish outfits from this period (and beyond) from the quirky sweaters to her big-bowed pregnancy blouses. It’s easy to understand. Diana’s magnetism is undeniable, even in this fictionalized version of her life and I was right there with everyone else. That is until I got completely and entranced watching the Queen herself, played by Olivia Colman, walk around Buckingham Palace carrying her purse.

I’m not sure why this has never piqued my interest before. Clearly the Queen has been walking around the palace with her purse for years, as have the actresses playing her on The Crown. She is not a woman that would suddenly change her habits. But the world has changed and I find myself sitting at home, working at home, celebrating holidays and birthdays at home and, as I watch The Crown in 2020, it dawns on me that the royal family has written the book on living life as a pod. This family has been doing it all under one roof long before the rest of us, from game nights to business meetings and even at-home wedding receptions. Yes, their house–or castles–might not tick the humble abode column, but it’s still where they call home. Watching the Queen wandering the halls with her handbag really got me thinking–should I start carrying a bag around my house? I love an accessory, so much so that I decided to work with them everyday as Vogue’s accessories director. It’s my job to not only take notice of these things but to know their uses. So, why did I think bags were for going out only? I could certainly bring one with me to yoga in my hallway in the morning and then take it with me when I clock into work at my kitchen counter. More importantly, though, what’s in the bag, your Majesty? If I’m going to start packing a house purse, I want to make sure it’s stocked properly.

While many finished The Crown searching for Princess Diana documentaries, I found myself poking around the internet to find out more about the box bag that the Queen always has by her side, my curiosity on high. Her Majesty is devotee of the brand Launer and The Crown stays true to history featuring her favorite styles from the British heritage brand, the Traviata and the Bellini. Fun fact: Margaret Thatcher also had a penchant for the impeccably crafted Launer bags, but she was most photographed carrying the Olympia style. From my research, it turns out the Queen often uses her purse as a signal to the people around her that she’s ready to leave one place and head to another. Grab the bag and it’s time to go. Some sites even go as far as to speculate on my most important query: the contents. Apparently, Her Majesty carries around some mix of a compact, a lipstick, some tissues, mints, corgi treats, reading glasses, a diary and a fountain pen – all useful things no matter where one is. All the articles I saw remark emphatically, in varying ways, that the Queen would never go anywhere without her handbag.

So, I’ve decided to give it a try. Why not? I’ve always been fond of a timeless, top-handle bag and so I pulled out my more pint-to-medium sized ladylike options, which had been gathering a bit of dust since I started hunkering down at-home last March. I settled on an off-white, lizard embossed Little Liffner minimalist mini tote that would normally be a great not-too-fancy-but-certainly-brought-out-for-some-sort-of-occasion bag. To be honest, I’ve actually found it quite useful to have my lip balm and glasses (to borrow a couple items from the Queen’s list) in one reliable place instead of haphazardly placed around my apartment. I also added my credit card, which I am constantly leaving in the pocket of my pants or jackets, a hair tie, and some hand cream to combat the hand sanitizer that lives in my XL grocery shopping carryall. Of course, I also really can’t wait to try to use it as a signal that I’m about to leave, even if it’s just a wave of top handle to sign out of a Zoom meeting.

As much as a bag is about function, it’s also just about investing in the kind of fashion that sparks joy. It’s the little things these days, right? Having a bag next to me while I’ve worked from home these last couple days has not only been helpful but also a bit soothing–a pretty object that I fell immediately back into reaching for as if the reflex had just returned from vacation. I can understand why a woman who is constantly being watched by those around her would also want to have this kind of prop as something to hold, move, use. Plus, when they are only for short trips indoors, the possibilities are endless. Personally, now that I’ve practiced with it, I’m not letting myself be afraid of white leather anymore–a material I certainly wouldn’t have allowed myself in the wild before. I won’t be carrying around any fountain pens, though. That seems like something only an incredibly graceful woman, or Queen, could get away with without tempting fate.

Shop my favorite royal-inspired purses below – for home and beyond.