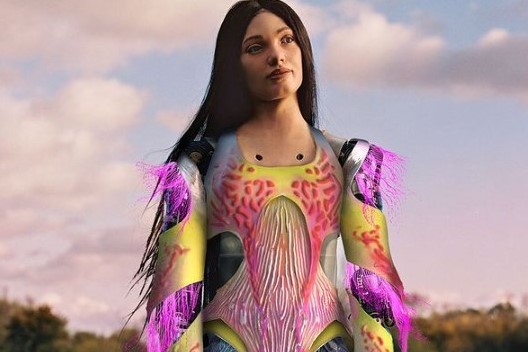 With appearances from Grimes, Paco Rabanne, and AUROBOROS, the inaugural MVFW runs on Decentraland from March 24 – March 27

We’re not yet three months into 2022 and there have already been 3,000 fashion weeks. Beyond the big four cities – plus Seoul, Berlin, Istanbul, and just about every other borough, town, and hamlet – a new fashion capital has emerged, playing host to the world’s “first ever” Metaverse Fashion Week. From March 24 to March 27, 50 brands will log onto Decentraland to debut virtual collections in the platform’s new Luxury Fashion District, which has been modelled on Paris’ vaunted Avenue Montaigne. Consider it a Neopian Bazaar (but with BoredApes) or Habbo Hotel (but with Lil Miquela as its Maitre D’).

If you wear trousers you are now a lesbian

While those words are enough to stir a sigh in even the most forward-thinking stylistas, it’s a good example of how crypto-fashion has moved from the margins of Web3 to enter public consciousness. And though designers like Mowalola, Mimi Wade, and Collina Strada have staged runway shows on IMVU, this is the most expansive attempt to replicate the feel of a real-life fashion week yet. Only, there’s no iPad-wielding PR to battle with over +1s. Alongside shows and presentations, attendees – ie; anybody with internet access – are invited to live concerts, store openings, afterparties, and film screenings, with the option to purchase (and wear) clothing straight from the digital catwalk.

Below is a list of all the things worth logging on and getting off to during the inaugural Metaverse Fashion Week.

The 2022 Metaverse Fashion Week will open with an activation by Selfridges, which will see the legendary retailer launch its first flagship store on Web3, featuring an “immersive” experience with Paco Rabanne. Inspired by the architecture of Avenue Montaigne, the MVFW runway will be surrounded by the platform’s new fazzione district, housing “sensorial” experiences from Etro, Tommy Hilfiger, Dolce & Gabbana, and Rihanna’s Met Gala couturier, Guo Pei. Already one of the most populated metaverses, Decentraland is a 3D virtual world and browser-based platform with software running on the Ethereum blockchain, which means to buy anything wearable you’ll need an Ethereum wallet.

Daily fashion shows will be held on a central runway by the likes of Dolce & Gabbana, Hugo, and Roberto Cavalli. Tommy Hilfiger will showcase its SS22 collection, shilling NFTs and physical pieces from within its Decentraland store, while Etro will lay the scene for a gender-fluid offering made up of its new Liquid Paisley print. Elsewhere, digital-first brands, like The Fabricant, will take to the catwalk, as will a trove of emerging designers, like LVMH-winner Kidsuper, which will make its crypto-clothing debut.

Beyond the faux-Paris honeypot, the rest of the Decentraland world will be swallowed in fashion (adjacent) activations. The CashLabs Space, for example, will present fashion films by the likes of Chanel and Lanvin, while holding panel discussions with industry-leaders like Alexandre de Betak. Rarible is sponsoring the New Designers’ Street, among them Artisant, Fabeeo Breen, Girl Gang, Perry Ellis, Placebo, and Charli Cohen. And a pop-up museum featuring NFT photographs from STREET (the legendary street style photography mag) comes courtesy of MetaTokyo. The event, however, will surely be a headline performance by Grimes as part of an AUROBOROS experience.

Much like fashion week – but without any free drinks – after-show parties at MVFW will be held by Dolce & Gabbana, Faith Connexion, Blond:ish, and Imitation of Christ. Many of these events, like that of ICYKOF, will feature shoppable drops. KnownOrigin, for example, will showcase its collection during an afterparty. It’ll be like the first lockdown again, when people convinced themselves that Zoom clubs were fun.