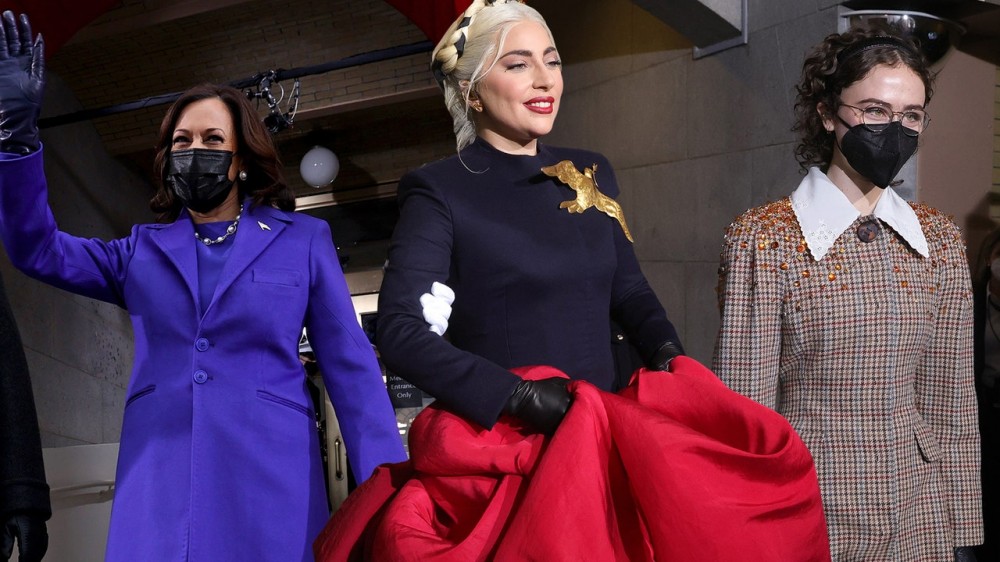 The visual impression left by an inauguration ceremony is usually defined by its sheer scale: hundreds of thousands of people swarming the National Mall, bombastic military parades, a glitzy lineup of pop star performers. But as Joe Biden was sworn in as president in the middle of a pandemic—two weeks after a domestic terrorist siege on the same building that served as a backdrop to the day’s proceedings—the spectacle was understandably more muted.

So where did the audience look for moments of visual interest? With the usual circus of Inauguration Day stripped back to its barest essentials, it was fashion that ended up under the microscope, sparking some of the most animated conversations on social media.

It makes a strange kind of sense. Over the past year, the events that would usually serve up eye-popping red carpet moments to entertain the most avid fashion obsessives—and also draw in more fair-weather followers—have been in short supply. Yes, it’s very low down the list of urgent priorities for an administration urgently faced with tackling a recession, systemic racism, social inequity, and mass unemployment, but a carefully considered sartorial choice can still offer a glimmer of something uplifting.

On Inauguration Day there was, most notably, a return to the brand of “fashion diplomacy” that became Michelle Obama’s calling card; instead of allying herself with a single designer, as with the first ladies of decades past, Obama cannily moved between brands that best represented either her objectives for each event, or the U.S. at large while traveling internationally. For the Bidens’ first public outing as the first couple, this approach fell along more traditional lines: President Joe Biden wore a gray wool overcoat over a meticulously-cut, single-breasted navy blue Ralph Lauren suit, marking a clean break from the comically sloppy tailoring of Trump’s suits before him.

Dr. Jill Biden, meanwhile, wore a dress and coat in a sparkly cerulean tweed designed by Alexandra O’Neill of the New York label Markarian, before switching into a double-breasted coat by Gabriela Hearst for evening that was embroidered with the federal flowers of every U.S. state and territory. The latter felt like a particularly intentional choice, and not just for the piece’s inclusive symbolism: Hearst has long made sustainability a central priority for her brand, and with her recent appointment as creative director of Chloé, is about to become one of America’s most prominent exports on the global fashion stage.

Kamala Harris’s style decisions largely took a backseat during the campaign—understandably so, given that she was running for vice president, a role that hasn’t traditionally been scrutinized for its approach to fashion, at least in part because it has always been held by men. But the past 48 hours have provided an opportunity for her to express her values through style more resolutely, while still remaining inside her sartorial comfort zone. Attending the COVID memorial on Tuesday, she wore a camel cashmere coat by Kerby Jean-Raymond of Pyer Moss, which, while appearing as a more traditional silhouette from the front, turned around to reveal a curved shoulder seam that gave way to a flowing, pleated back.

And yesterday, she wore a knockout coat and dress by Christopher John Rogers, whose kaleidoscopic eye for color saw its particular hue of purple seem to shapeshift as the weather moved from overcast to sunny. Both Jean-Raymond and Rogers run independent, Black-owned businesses; the former quickly pivoted at the beginning of the pandemic to use the resources of his studio to supply PPE to frontline medical workers. Given Harris’s diligent attention to her style choices, the designers she chose to spotlight were also no accident.

The other high profile style moments of the day? Ella Emhoff, the stepdaughter of the vice president, who wore a Batsheva dress—a piece that quietly nodded to her Jewish heritage—under a showstopping plaid Miu Miu coat finished off with a sprinkling of crystals over the shoulders. Bernie Sanders represented his home state of Vermont in a Burton ski coat and a pair of gloves knitted by a local teacher who recycles wool into mittens. The day’s breakout star, 22-year-old poet Amanda Gorman, wore a yellow Prada suit accessorized with jewelry gifted to her by Oprah Winfrey; Lady Gaga’s Schiaparelli couture gown, meanwhile, celebrated American designers working within the highest echelons of Paris fashion.

And finally, there was the much-memed appearance of a pair of Dior Air Jordans in the background of Amy Klobuchar’s introductory speech, which set Twitter aflame as fashion sleuths sought to track down its wearer. It turned out to be Nikolas Ajagu, Harris’s son-in-law: When his wife, Meena, was asked on Twitter whether the hypebeast-heaven sneakers were his, her answer was simply and hilariously, “Yes smh.”

It would be easy enough to round up these pieces as simply a delightful mish-mash of eclectic style moments, instead of offering any kind of neat summary on the current state of American fashion. But it’s the sheer variety of ways in which the day’s attendees used style as a statement of intent that feels most exciting—and perhaps more significant than it initially seems. The trajectory of trends within U.S. fashion is no longer linear, nor has it been for at least a decade, yet the conventions of what might be considered “appropriate” to be worn for an event that carries such gravitas—or is seen to represent traditional American values—has remained steadfast for longer than it probably should.

What it really boils down to is the fact that trends across the U.S. are no longer driven by the hegemony of New York City–based, largely white designers who dictated it for so many decades. Today, it exists across a far richer and more exciting patchwork: of cut-and-paste upcycled trousers handmade in Delaware, or Indigenous artisans crafting one-of-a-kind dresses in Montana, or established designers starting afresh in Detroit to explore and enrich the cultural communities already working there. To look for a clean, succinct takeaway on American fashion from today’s proceedings is to miss the point—the fun of it lies in its topsy-turvy mix of culturally specific references and sentimentality.

It felt like this year, the clothes worn in the rows of seats behind the President’s podium no longer had to adhere to the buttoned-up precedents of Inauguration Days past, and was all the more exciting for it, reflecting a more diverse—and ultimately more authentic—vision of how Americans dress today. All those face masks we saw might bring an air of the surreal, but the way in which U.S. fashion was represented felt more real than ever: a rich and eclectic tapestry that is only just beginning to unspool.