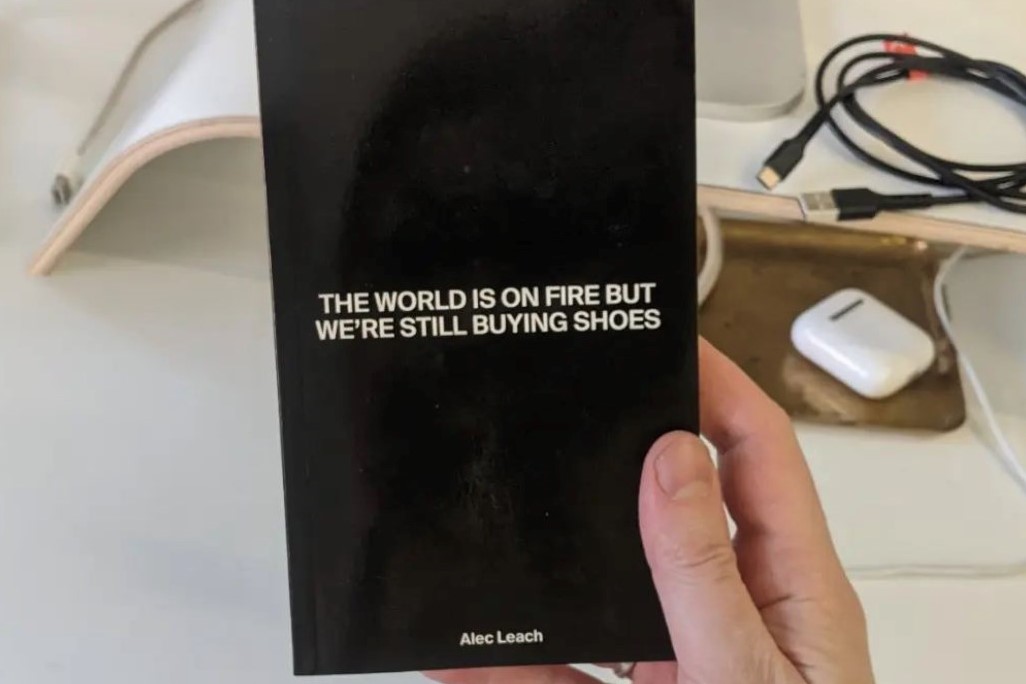 In the opening montage of Confessions of a Shopaholic (stay with me), Rebecca Bloomwood, a feckless finance journalist strides the length of New York’s 5th Avenue. She’s wearing a hot pink fuchsia puffer, a hot pink fit-and-flare mini dress, and hot pink snow boots, as an Amex-addled monologue plays overhead, listing all the reasons why shopping for clothes is infinitely more fulfilling than any human relationship. She returns to the familiarity of those window displays throughout the film, her sad little face illuminated by glimmering storefronts before she’s pulled through their doors in a celestial burst of wind and light.

The thrill of a purchase and its accompanying dopamine hit is what real-life fashion journalist Alec Leach attempts to pin down in the first few chapters of his new book, The World Is On Fire But We’re Still Buying Shoes. Informed by his own time spent soul-searching in therapy, Leach details the ways in which fashion has seemingly built itself on a fantasy optimism, status, belonging, and novelty, questioning why it is, even when we know full well that we are hurtling towards hell, that we continue to amass more things. We can’t buoy ourselves on Boohoo when the sea levels rise, and nor can we build a fort from Supreme when wildfires tear through our homes.

Måneskin, moonlight, & magical clothes: what went down at Gucci Cosmogonie

Both Confessions… and The World Is On Fire step into the shadows of consumerism, one examining the personal ricochets of compulsive spending, and the other, environmental. As a former editor at Highsnobiety, a streetwear publication which encourages its readers to “discover and shop what’s next”, Leach is an expert in how fashion’s marketing machine draws in its customers. Though he speaks fondly of his time at the magazine, he increasingly struggled to square his concern for the planet against his own role in the overproduction cycle. This book, he says, was born from that conflict. “As someone that had basically spent my professional career telling people to buy stuff, I figured I could probably have a pretty good answer as to why our shopping habits have gotten so out of control,” he explains from a coworking space in Berlin.

Something of an Idiot’s Guide to consuming fashion responsibly, The World Is On Fire is a straight-talking expansion of Leach’s eco-fashion platform @futuredust, using large, rounded font, pumped-up pull quotes, and infographics to answer “why we shop so much, how fashion keeps us hungry, and the tricks it plays to cover up its true impact on the planet”, like all those deceptive ‘Made In’ labels. At no more than 140 pages, Leach didn’t feel the need for “some sort of huge, meticulously researched book to get [his] point across. People don’t want an enormous longread to understand a new idea, you can get through this in an hour and have your mind opened up to a different perspective”. In our conversation below, Leach explains when it’s okay to buy more clothes, corporate red flags, and sustainability as Sustainability™.

Hey Alec! You have thrown your weight behind sustainability ever since leaving Highsnobiety in 2018. What spurred you into writing The World Is On Fire?

Alec Leach: I used to go to all these sustainability conferences where everybody talks about organic cotton and carbon emissions but nobody ever spoke about consumerism. It became really clear to me that the way we shop is such an overlooked factor in fashion’s impact on the planet. And as someone that had basically spent my professional career telling people to buy stuff, I figured I could probably have a pretty good answer as to why our shopping habits have gotten so out of control. I also did a lot of therapy in the years between 2018 and 2020, which is where all the psychological and philosophical stuff in the book came from.

You’ve spoken about the dangers of consumerism at length on your Future Dust IG account, too. Have you found Instagram a limiting platform?

Alec Leach: I don’t trust how social media works right now. I’m really not the kind of person that likes to deal in hyperbole and hyped-up headlines and so I realised it wasn’t really a good idea to rest my entire professional perspective on Instagram. At the end of the day fashion is still about physical products and people notice you more when you put something tangible into the world – they won’t congratulate you on doing a great post but they will congratulate you on doing a book.

Did you have a reader in mind?

Alec Leach: I wrote it for myself to be honest, but also I want the kids lining up outside Supreme to be into it, or the people checking out new trends on TikTok, as well as those who have worked in fashion their entire lives. The biggest problem I have with the fashion press right now is how it’s essentially becoming an accomplice for corporate greenwashing because it won’t ask difficult questions – most fashion editors are pop culture experts, not scientists, and that makes them super vulnerable to greenwashing.

The concept of sustainability is increasingly shaped by corporations. That’s why you prefer to use the word ‘responsible’, right?

Alec Leach: That’s why I called the third chapter Sustainability™. The word is essentially meaningless because absolutely anything can be described as sustainable, like an NFT, or vegan leather, which is essentially made of plastic. Responsibility, however, is much more of an all encompassing word because it’s about brands truly doing the work when it comes to reducing their impact on the planet. The problem is that the entire sustainability conversation has become polluted and people can’t distinguish between the brands that are serious and the brands that are taking them for a ride.

What’s the biggest red flag, then?

Alec Leach: When a brand tells you that buying something is somehow solving the problem, if they try to sell you the idea that shopping is a solution.

There’s been a lot of talk about the trend cycle imploding recently, with everything seemingly popular at once. Do you think that might give people an exit route out of disposable fashion?

Alec Leach: If you’re only shopping for yourself then you don’t need to worry about what’s going to be cool in six months time. A point I keep coming back to in the book is that if you let marketing teams tell you what to buy then you’re always going to be disappointed. Our biggest opportunity is to start questioning if a product really means anything to you, if you really, truly want to let that item into your life.

It’s important to remember that nothing is sustainable in this world – that’s why it’s so much so important to just buy less stuff. But there are many ways to be thoughtful as a consumer. Buying from Black-owned businesses is a really responsible thing to do. It doesn’t matter if that item doesn’t have the same amount of organic cotton or recycled polyester as something you might buy from a white-owned business. That’s why it always comes down to the volume of what you buy rather than the item itself.

What have you bought since the book came out?

Alec Leach: It can be a really tedious process and I shop much slower than before, but I did buy this really slouchy linen long-sleeved top from Our Legacy when the book was published.

There are plenty of economic advantages to fast fashion, which can make Shein and Boohoo inescapable for young people who haven’t reached the same point of enlightenment that you have. Do you think you had enough scope to explore that?

Alec Leach: There’s this particular narrative in sustainability that’s basically just a bunch of white people who cannot get their heads around why people shop fast fashion. You can’t shame people for buying things that they can afford and the idea of targeting one specific price bracket doesn’t make sense – because the entire fashion industry is fast fashion now, even luxury brands are competing with the pace of TikTok to get clothes out. I think the obsession with fast fashion has really let a lot of brands and individuals off the hook. A big reason as to why I did the book was to take a lot of the issues surrounding fast fashion and position it within the contemporary streetwear space.

So, a difficult question, why do you still work in fashion if you care so much about sustainability?

Alec Leach: I’m no Mother Teresa, I still make money out of the fashion industry, from copywriting, strategising, and consulting. I’m still a part of the system. I still love shopping. It’s so easy to look at what I do as if it were this super critical project that’s only ever dissatisfied with what’s going on but fashion’s impact on the planet is so complicated that it comes down to really, really marginal improvements on the system. There are just so many problems with the industry, I just felt like it was impossible to ignore them and to not say something about them.