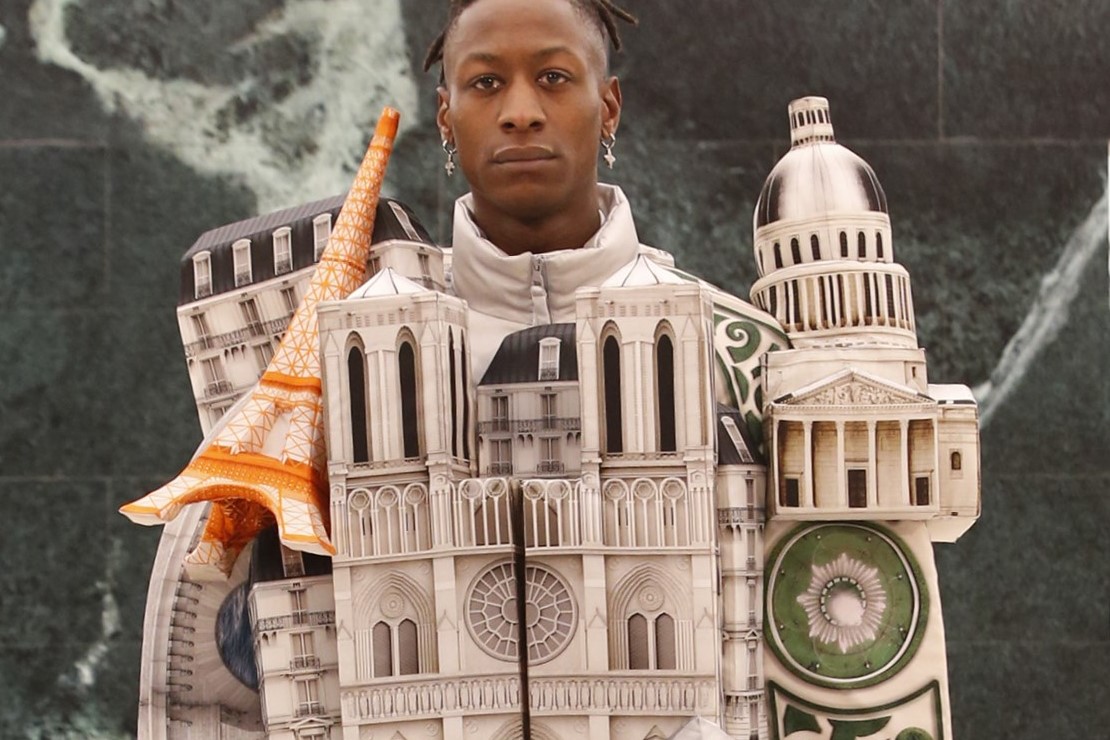 If you can’t go to the city, bring the city to you?

Ten months into the pandemic and it’s likely you’re as sick of looking at the same four walls as we are. Seemingly, Virgil Abloh’s feeling the same kind of cabin fever as the rest of us. Debuting his latest collection for Louis Vuitton via a short, conceptual film, the designer took us to Paris and beyond via two very conceptual looks. As for the rest of the show? Here’s everything you need to know.

THE INVITE WAS A FLIGHT RECORDER BOX

…inside which the parts for an LV-embossed wooden plane were waiting to be assembled – pretty much the closest most of us are getting to hitting the skies right now. The pièce de résistance, however, was the invite itself: a Louis Vuitton-branded airline sick bag. Truly inspired.

VIRGIL ENLISTED SOME ICONIC (AND HISTORY-MAKING) MODELS FOR AW21

Inspired by James Baldwin essay Stranger in the Village, the film opened with a sweeping shot of the snowy Swiss Alps – reflecting Abloh’s experience of living there as an African American man – before landing in what appeared to be an extremely chic, marble-dripping departures lounge (Luton at 4am this was not).

Reciting a rousing portion of his performance piece “Coded Language”, Saul Williams made his way around the space, as models watched from benches and lolled against walls. Picking up where he left off later in the short was Yasiin Bey – aka Mos Def – who debuted a number of original tracks, as rising poet Kai-Isaiah Jamal made history as the first Black, trans model to walk a Louis Vuitton show.

THE COLLECTION WAS ONE FOR THE PLANE SPOTTERS

…just in case the invite didn’t give that away. Dramatic floor-sweeping overcoats with wide shoulders were finished with chunky aeroplane buttons, while LV’s signature monogram leather was reworked into jet-shaped bags and metallic wheel-along suitcases. Drawing inspiration and clashing cultures from around the world, the collection also saw Ghanian Kente cloths crafted from Scottish tartan, and durags worn with stetson-like hats – with slick tailoring and more hype-y pieces including bomber and varsity jackets, structured vests, and chunky, gold-buckled belts also featuring heavily.

Citing the ideas children have of what they’re going to be when they grow up as a starting point, Abloh riffed on the archetypical images of artists, businessmen, salesmen, and gallery owners we have etched in our minds. Looks were finished with branded coffee cups and hot-off-the-press Louis Vuitton newspapers. No word on whether the multi-hyphenate designer’s thinking on dropping his own publication, but tbh, we wouldn’t put it past him.

THERE WAS AN ARTIST COLLAB

Virgil enlisted conceptual artist Lawrence Weiner to plaster statements inspired by the collection’s themes across accessories, with “You can tell a book by its cover” and “The same place at the same time” running down bag straps and sashes worn across pinstripe suits.

Also landing on the runway were a pair of highly conceptual jackets, one of which had been constructed with skyscraper sculptures that rose from its hem. The other more decorative style featured an effigy of the Eiffel Tower and a Parisian maison jutting from its shoulder, in celebration of the meeting of Abloh’s architectural and fashion expertise. If you can’t go to the city, then bring the city to you, we guess.

Check the collection out in the gallery about and watch the show below.