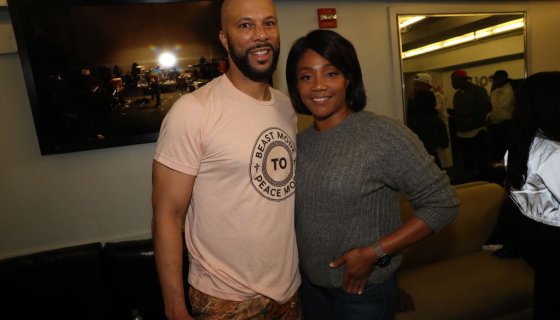 When it comes to tea, we all know our parents have no filter. So when made a comment seemingly confirming what fans have been long suspecting for the past few months––social media took notice.

Last week, while celebrating ‘s birthday, took to Instagram to share a pic of the two doing a sip and paint activity with a heartfelt caption for the legendary MC’s birthday.

“Happy Birthday to My Friend @common,” Haddish wrote. “I Love that you are willing to go on @groupon adventures with me. #paintandpour plus food.”

Happy Birthday to My Friend @common !!! I Love that you are willing to go on @groupon adventures with me. #paintandpour plus food

Despite captioning the photo calling Common a friend, a few fans took to the comment section to inquire just how friendly the two entertainers are. One fan, in particular, held no punches and asked Haddish directly if the two have been intimate.

“Did u get the D suh??” Instagram user @TheVant asked.

Not one to hold anything back, Haddish responded frankly that she had previously tried but stopped after realizing that she was the one putting forth the effort.

But it was the comment from Beyonce’s mother, Tina Knowles, that had fans ready to dub the two “couple goals” after Haddish denied that there was a relationship to admire––further after a series of recent public appearances the two have made together including a courtside appearance during February’s NBA All-Star Game in Chicago.

Although neither Tiffany Haddish nor Common has confirmed or denied the claim, it does leave fans to wonder if Common has learned from his previous relationships to keep things under wraps for the safety of their potential relationship.

News of the potential relationship broke last year after it was revealed that the “Food” rapper and political commentator had .

Common already being a father to an adult daughter, Omoye, Rye was understanding of his decision but knew that she had to move forward without him in order to create the life she wants for herself.

”I remember us having this conversation the day after we talked about Ryan [Rye’s godson] and he said ‘I don’t know if I want to have kids,’ and I said, ‘I don’t know what else there is to talk about,’ Rye continued. “I think it was an amicable parting of ways. But we’re very clear about the fact that we were not aligned in those interests. I wish Rashid (Common) the very best, but it was time for us to do something very different.”