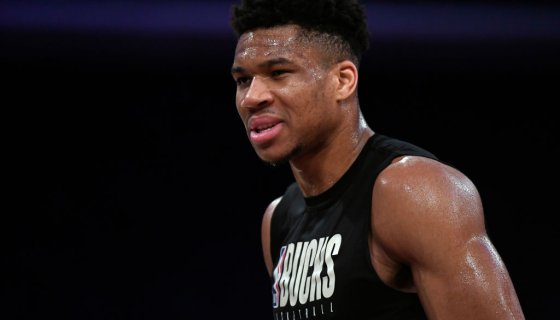 Hackers still got time, even during a global pandemic.

Milwaukee Bucks’ superstar had to change all of his passwords and activate that two-step verification. The Greek Freak’s Twitter account was hacked and let off some pretty wild tweets that had raised the eyebrows of his followers. Before they were deleted, some of the tweets during a 10-15 minute stretch that took shots at directly mentioning the Lakers star and claiming he hired a hitman on Giannis.

The hacker sent out a bevy of troubling tweets  “f*ck Kobe Bryant. #bodied”, dissed Giannis’ teammate Khris Middleton, claiming he caught coronavirus and blaming Asians and using an ethnic slur, saying he was going to the Warriors and even saying he had with Steph Curry’s wife.

The Giannis tweets for everyone who didn’t see them…. WTF pic.twitter.com/LG6ovxZleG

Immediately fans knew the Giannis’ account was hacked, and Antetokounmpo’s longtime girlfriend, Mariah Riddlespringer, and his brother, Kostas, confirmed their suspicions. They even revealed that Giannis’ email, bank account, and phone were also comprised. “He genuinely apologizes for everything that was tweeted, and he will be back as soon as possible! The things that were said by this hacker were extremely inappropriate and disgusting!” they added.

While this is a serious matter, you know Twitter had jokes, immediately wondering if the NBA’s Most Valuable Player used the same password for all of his accounts. Regardless the reactions are quite comical, you can peep them all below, and Giannis, you gotta get you some stronger passwords.

Giannis should’ve just made his password his last name… nobody spelling that right #Antetokounmpo pic.twitter.com/bhv15Ddztp

They did Giannis dirty 😳 pic.twitter.com/Md0cwuWLDF

dog if i was as famous as giannis my password would be pic.twitter.com/bYD0byYGND

The dude that hacked Giannis pic.twitter.com/yr61Vq3lMZ

We got the racist kid that hacked Giannis’ twitter: @dickhead pic.twitter.com/Upvf2cmC9Z

We all know who really hacked Giannis.. pic.twitter.com/KH7rGFfQm9

Whoever hacked Giannis, we’re coming for you pic.twitter.com/i8A1pQgzJI

Need someone to have my back like Kostas does for Giannis 😔 pic.twitter.com/4U3Kr25BCP

I know there's some heat in Giannis' DMs alluding to his FA plans. And this goofy muthafucka is posting Trippie Redd message boards. Please arrest this dumb bitch

When Giannis and his brothers find his hacker pic.twitter.com/IYgh5md0T6