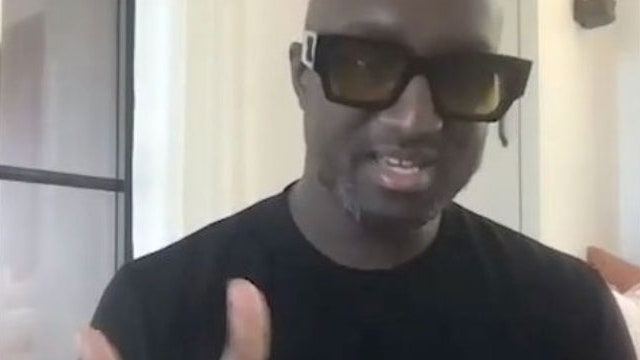 Each design sent down a runway has significance to its designer. Even so, some looks are more personal than others. In January, when Virgil Abloh paid tribute to his Ghanian roots in Louis Vuitton’s fall/winter 2021 men’s collection, he introduced a distinctive kente cloth into the house’s repertoire of prints. Model Levi Mankessi wore a look with the Vuitton monogram woven into its stripes and bands the fabric. Draped over Mankessi’s hooded sweatshirt bearing the words tourist vs. purist and his logo’d jeans, it made for a meaningful statement, one that merged the symbols of Abloh’s past and present. “My personal story is in that collection,” Abloh shared with Vogue via Zoom. “My parents are looking at these Vuitton shows. They’re reading the BBC News articles about my use of kente cloth, [but] I’m looking at a photo of my grandmother in full kente that inspired the look.”

As evocative as that picture proved, Abloh felt his role was to innovate, not imitate. “It’s important to know that we’re a young generation painting new pictures because the original pictures were erased,” he explains. “I’m not here to just repurpose historical images.” The motivation behind the usage ties back to representation and Abloh’s desire to bring diverse perspectives into fashion. “There is a current generation that is eager, a 17-year-old somewhere that might be hiding their ethnicity or shy about having friends come over because the food [at his house] smells different or his parents might eat differently [or] there are different traditions,” he explains. “What I represent as a designer is to expand the space; the garments are side effects.”

Fast forward three months, and the conversation has taken on another layer. For her first Vogue cover, youth poet laureate Amanda Gorman wears an alternate version of the look styled by contributing editor Gabriella Karefa-Johnson. Reimagined as a flowing gown, the look has a new verve, one that speaks to kente’s timelessness and the youthful exuberance of the 23-year-old poet. “I subscribe to this idea of Pan-Africanism and the idea of cultural unity that exists between [all] people who live on the continent and people throughout the diaspora,” says Karefa-Johnson. “Kente has always been a visual signifier of that idea to me—it means something to a lot of people who aren’t always spoken to on the cover of powerful magazines.”

In this Vogue video, Abloh and Karefa-Johnson outline the ins and outs of the selection, its meaning, and how they’re using their platforms to center Blackness in all its beauty.