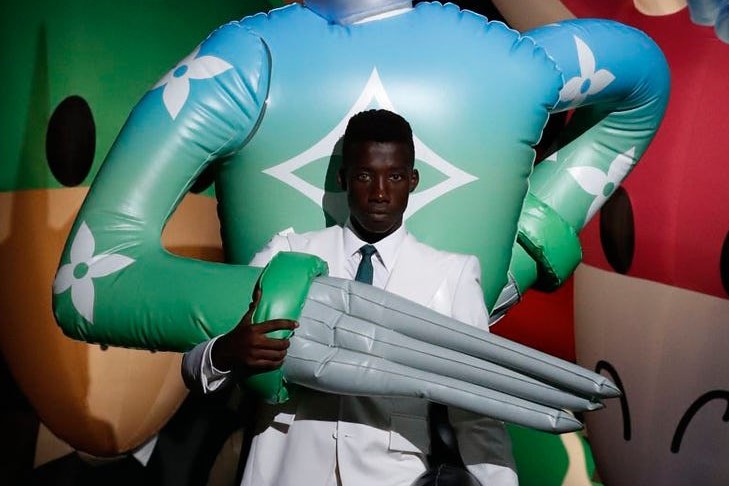 The designer reflects on his latest collection, his concept of Black Imagination, and why we shouldn’t always jump to conclusions

Last night in Tokyo, Virgil Abloh’s fifth Louis Vuitton menswear collection got its second outing – updated with a series of new, city-exclusive pieces. A “parade of inclusivity and unity”, soundtracked by a poem by Dazed 100 talent Caleb Femi and featuring the reappearance of the giant, inflatable Zoooom with friends characters conceived by Abloh and artist Reggie Know, the show built on the SS21 collection’s initial debut last month in Shanghai.

Taking place against the city’s river, the Shanghai event featured a virtual Lauryn Hill performance, the birth of a new ‘Upcycling Ideology’ – which saw material recycled from overstock, as well as the more metaphorical ‘upcycling of ideas’, and a show-close by actor and megastar Kris Wu.

But with it came the kind of controversy that people are often quick and certainly gleeful to pin on Abloh. Designer Walter van Beirendonck claimed elements of the collection, like the inclusion of puppets, were derivative of his own archive – prompting Abloh supporters in return to point out, in turn, the questionable ‘tribal’ inspirations present throughout the Belgian designer’s work.

Recognising that conversations of a finger-pointing, who-did-it-first nature largely lack nuance – or that, “in the age of social media, fiction travels faster than fact” – Abloh’s notes for yesterday’s show contained an essay exploring not only his own inspiration for this collection but also notions of originality and the myth of ownership over ideas. It explained his own inspiration – which, rather than another designer’s work, traversed sculptures made in his parents’ birth country of Ghana, the checkerboard pattern of ska and the way diasporic style was adopted into British subculture, a trip to a toy shop, and the teddy bear carried at Marc Jacobs’ SS05 show for LV, among others. (Van Beirendonck’s work “is not within my frame of reference”, says Abloh).

Lost somewhat in the post-Shanghai comments section controversy was the intention behind Abloh’s latest collection – and in a larger sense, his work in general. Whether you’ve seen it firsthand or not, everything Abloh does – and has spent his entire career doing – is in support of Black Imagination and Inclusivisualism, two phrases he coined for SS21, perhaps out of a recognition that simply doing the work rather than talking about it doesn’t seem to be enough for some detractors.

Black Imagination is summed up as “the transformative process of rethinking and overturning the inherited and often unconscious expectations tied to Black identities through history, and creating an encouraging Black consciousness for the present and the future”, while Inclusivisualism is the desire to create images of men of colour in luxury so that they may see themselves in its image. This collection – which also coincided with the launch of his $1m scholarship fund – was further proof of his desire to reimagine the world of luxury fashion from his perspective, opening its possibilities and unlocking the door for those who will come after him.

Below, Abloh speaks further on some of the collection’s thinking – and what he wants his critics to know.

How did you convey the motivations behind the Spring-Summer 2021 collection?

Virgil Abloh: For the Shanghai show, I wrote a Manifesto devoted to my ongoing objective: embedding my collections with Black Imagination, and supporting and hiring BIPOC and LGBTQ+ causes and people. In the show notes that accompanied it, there were several references to my Ghanaian heritage, just like the Vocabulary I update every season echoed the beliefs and references proposed in those other documents.

What is Black Imagination?

Virgil Abloh: Black Imagination is my ethos at Louis Vuitton. It means to imbue Black peoples, cultures, subcultures, arts and iconographies within imagery that has traditionally excluded Black identities, such as fashion and luxury. It is called Black Imagination because it is a way of manifesting Black dreams in real life. What I did with the puppets – imbuing a Louis Vuitton garment with a whimsical element inspired by my Ghanaian heritage, which is very dear to me – is Black Imagination on display.

For those that don’t understand, explain the correlation between wood carving figures, masks and statues and your Ghanaian heritage?

Virgil Abloh: The art I grew up with at home wasn’t European by nature, it was Ghanaian. Wood carvings of masks and sculptures were the norm. They are similar in obvious spirit to a stuffed animal character. Under the collection’s overarching guise of ‘Boyhood’ – the idea of seeing the world through the eyes of a child – those lines were drawn with my personal heritage to present expression.

What inspired the surreal patterns in the SS21 collection?

Virgil Abloh: A main idea of the show was Hypnovisualism, my term for the notion of hypnotising adults. I mean this figuratively. In an age where we’ve tried every rational approach to making the world a better place, what if we could put a ‘hypnosis’ on humanity and inspire everyone to be more compassionate towards one another?

How did you communicate this theme?

Virgil Abloh: The idea of Hypnovisualism connects to surrealism, an area I’ve been exploring for a while. In terms of the clothes and accessories, it’s about twisting the norm and making the ordinary extraordinary. The underlying message is about making the impossible possible. It relates to the Boyhood Ideology, to Black Imagination and the Upcycling Ideology we also debuted this season. Everything I do comes back to humanity.

As a person in the public eye, criticism is inevitable. What would you like your critics to know?

Virgil Abloh: In the age of social media, research and comprehension are more important than ever. If you see an image and question what you see, research the motivations behind it before you judge it, and think about what drives you to jump to conclusions. I would always ask myself: What is myth and what is reality?