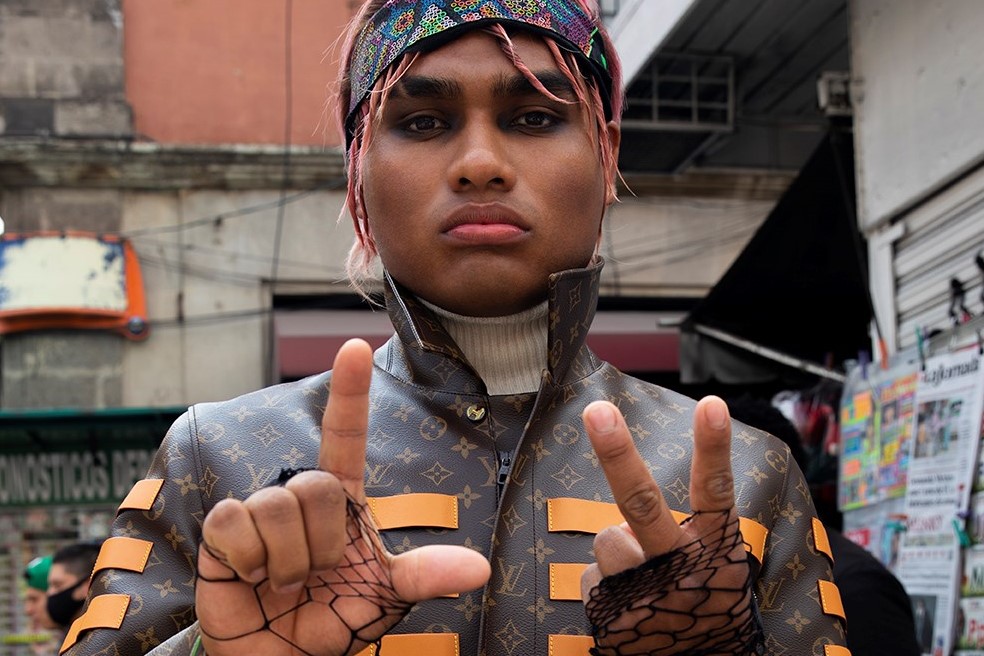 Taken from the autumn 2021 issue of Dazed. You can buy a copy of our latest issue here

Virgil Abloh tinkers with the status quo better than most. His vision is never singular; instead, he is creatively driven by grabbing the best of what is happening in the real world and online, mish-mashing them together for clothes that speak as social commentary on the culture of today.

With both his own Off-White label and his tenure as men’s artistic director of Louis Vuitton, his work seems purpose-driven and perfectly agile. That’s perhaps because the design polymath has always been willing to collide with culture wherever it met him. The streets of Chicago, the club nights of London, dragging and dropping on the world wide web, or in an atelier in Paris’s Rue du Pont Neuf.

And while his designs never fail to garner chatter, Abloh is more interested in the unsaid. He interrogates the negative space between the great ideas (take the upcoming collaboration between Nigo and Louis Vuitton, for example) and where he can make the connection.

It’s not where a lot of creative directors would naturally go, but as  Abloh explains, “A lot of the time (when) fashion is sold to us, the archetypes are X, Y, Z. Often when we say ‘high fashion’ – fashion with a capital F – we mean the people cemented in the canon of fashion. I very much exist to challenge that, by simply being who I am and presenting my work.”

“I definitely don’t think about the past too much. I’m sort of always working ahead. Shayne Oliver, whom I respect a lot, explained how we are at the point where Black designers can just reference themselves. And that’s very empowering. I think one thing I’m not is a pure futurist. I see how, in design, people get obsessed about two things: being completely new, and being the future.

They use the word ‘new’ as if it’s like fairy dust, as if no one else in the world exists and your ideas are in a silo – that triggers a whole other set of problems. With the future, I get it, you know, I’m not an idiot. I understand this idea of futuristic thinking, I understand the allure, it sounds cool. It leads humanity on; things become better. But I don’t lean on these things as a method of scoring points. I stand for diversity, I stand for a lot of things in the past that haven’t been dealt with or contextualised properly. So, in my own canon, I’m dusting off how important Goldie is, for example. (It’s) his personal history – when you look at how jungle and drum & bass music is having a revival for a whole new generation, (people) may not know that it was a Black artform. I might start DJing 30 minutes of jungle and somebody could come up to me thinking that electronic music doesn’t come from the subcultures of Black and brown communities. In that way, I think, ‘Wait, I like the past.’ I like dusting off and recontextualising the past more than completely going towards the future. I think that’s fine for others, but for me, what gets me excited is the way I position my eye.

I usually think about the gap – about what’s not being talked about. I’m a part of contemporary culture, I’m a part of the contemporary discourse on fashion. I input things and I listen and see what the topics of the day are. I think to myself, ‘Wait, how come we’re not talking about this?’ With the “I Support Black Women” campaign, I saw a gap, I didn’t see the fashion industry addressing these topics in the same way. There’s a lot of discussion on ‘streetwear’. Is it still buzzworthy, still a hot topic?

What I meant about that is, ‘That term is a loaded one and you can’t just drop it on my work without me contextualising it back.’ Nigo is like that with how he extrapolates luxury and history. He’s a collector, he’s a preserver, he does it in his own quiet manner. He created this amazing brand, BAPE, which is really the north star of modern luxury. Luxury stores today look like what he was doing ten, 15 years ago, with immaculate interior design, placing a sneaker in all the colourways and a culturally relevant sort of approach to pattern and design. And he was relating it all to hip-hop culture. When somebody riffs on Coco Chanel and the origins of that and what it means, all of a sudden it’s adopted by everyone as a fact. That gap in the conversation is exactly why I chose to collaborate.

“Often when we say ‘high fashion’ – fashion with a capital F – we mean the people cemented in the canon of fashion. I very much exist to challenge that, by simply being who I am and  presenting my work.” – Virgil Abloh

I am a theoretical, philosophical thinker on the topic of luxury, especially for a younger generation. It’s an obvious thing. I think with my collections for Louis Vuitton, you can almost see my brain in the collections going back and forth with the idea of luxury. ‘I’ll do one this way, then I’ll do one the opposite. Then I’ll do one the opposite of that.’ I think the first misstep when understanding luxury is to assume that the luxury we grew up with is, indeed, luxury. If something is 100 years old, does that make it luxury? Like a lot of people, when I was coming up, I was buying things because it was like, ‘this is the oldest’ or whatever. And that felt good for the soul. A younger generation, Gen Z, is pulling the thread out of everything that’s perceived as fact. They will say, ‘So what?’ There’s no definite answer. All these things are changing definitions of our time.

My Instagram has become an important tool in filling the gaps. People say to me, ‘There’s  no way you do your Instagram by yourself,’  but a friend of mine was like, ‘I know you do,’ because he knows me very well. I think I figured it out. I’ve lived long enough to understand how this game works – about creators, the public and the critique, the long-lasting impression. I can’t expect someone to know my impetus behind a design if I never tell anyone – and being Black and of a minority, I can for sure assume that it will be wrong. I can assume that, if someone sees that I’m  making clothes, they are going to call me a ‘streetwear designer’. I know that without even guessing.

They’re not going to call me a designer whose mother from Ghana taught him how to sew when he was 12, or how he’s an expert tailor, which is true. I know that this is not what is going to be written in any article that’s about me. I guarantee it will say ‘DJ’, it will say ‘streetwear’, it says something about hip hop, you know? And that’s why, to (counter) all of that, I fused my Instagram into my work. It’s almost like it’s my own magazine, it’s my own book. A book doesn’t need to be printed. It’s fused with my studio (work), instead of an after-effect. I’m my own documentarian; I do it so it’s factual, my phone is my practice and my Instagram is there for anyone to peer into. And that’s how I can sleep at night, knowing that I’m not going to be taken out of context.”