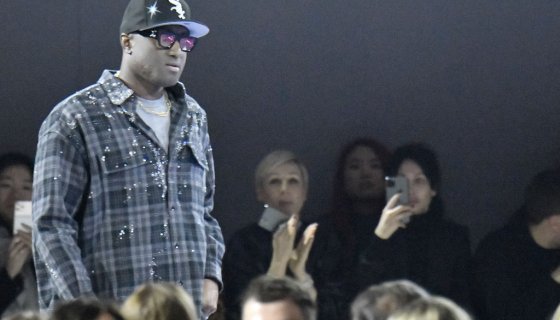 If anyone in the world that should be financially set, most certainly has to be considering the price of his designs. However, Abloh is catching major heat online after reportedly donating just $50 to a bail fund for protestors and folks on Twitter are tearing him to threads.

Abloh, who is the CEO of high-end streetwear brand Off-White and the Artistic Director for Louis Vuitton, took to Instagram Stories and shared that he donated $50 to a fund to help bail out protestors arrested across the nation in support of , Breonna Taylor, and Ahmaud Arbery among others. He asked those viewing to match his contribution, which pales in comparison to other celebrities who have donated six figures and up.

Almost immediately, observers took to Twitter to slander Abloh for his paltry donation considering that even his cheapest clothing items cost more than his bail fund donation.

Even more remarkable is Abloh blasting looters and protestors for damaging storefronts of some of his fellow fashion designer friends like Sean Wotherspoon of Round Two, who is siding with the protestors despite the damage his stores took. However, some are saying that Wotherspoon has exhibited poor behavior towards women in the sneaker design industry but overall, most are standing with him after his latest message on Instagram.

Still, some aren’t letting folks like Abloh and Wotherspoon off the hook for promoting fashion that is hardly accessible except to only the well-off or wealthy.

The designer’s name is trending on Twitter at the moment and not for a good reason as we’ve just shared. We’ve got the best of the cheapskate Virgil Abloh slander below.

Have y'all seen Virgil Abloh's family photos though? This man's home address is The Sunken Place 😭 pic.twitter.com/8CH6t3Vt1e

remember when Virgil had a nigga tap dancing at his fashion show as a political statement? 😭

Virgil Abloh selling socks that's worth the same as mortgages and said here's $50 my brother fight the power.

Virgil Abloh can put quotation marks on some clothing but can't put commas on a donation.

Virgil Abloh. Creator of Off-White.. Artistic Director of Louis Vuitton donated a measly $50… and y’all want me to feel bad for designer stores getting looted???

I admittedly dont "get" high fashion most of the time but y'all blew Virgil up just bc this man stamped some shipping labels on some Nikes and threw some zip ties on them. Look at the monster you created.

I tried to warn ppl about Virgil back in 2018 + ppl were pissed. Now look…

Virgil doing all that vs the friend he’s talking about pic.twitter.com/xx3C7puwlt

Virgil donating the hefty sum of $50.. approximately the cost of one Off-White sock pic.twitter.com/HtHQm5yXoC

How I donate more money than Virgil tho

Virgil abloh exiting insta After flexing a $50 donation to his story which isn’t even enough to perchase one pair of his off white socks pic.twitter.com/iJ8AsIeNAF

I know Virgil Abloh is lying to me! Lmao. pic.twitter.com/H9JHTNF8MY

Virgil Abloh is a “CLOWN”

Virgil is disgusted about Sean Wotherspoon's store burning down.

Sean Wotherspoon is disgusted that George Floyd is dead. pic.twitter.com/qL9ykD3qq4

Just a reminder that earlier today Virgil told rioters to hang their heads in shame because they destroyed his white friends sneaker store. and then his homie don c suggested shotguns for protestors over his shit ass cotton snap backs.