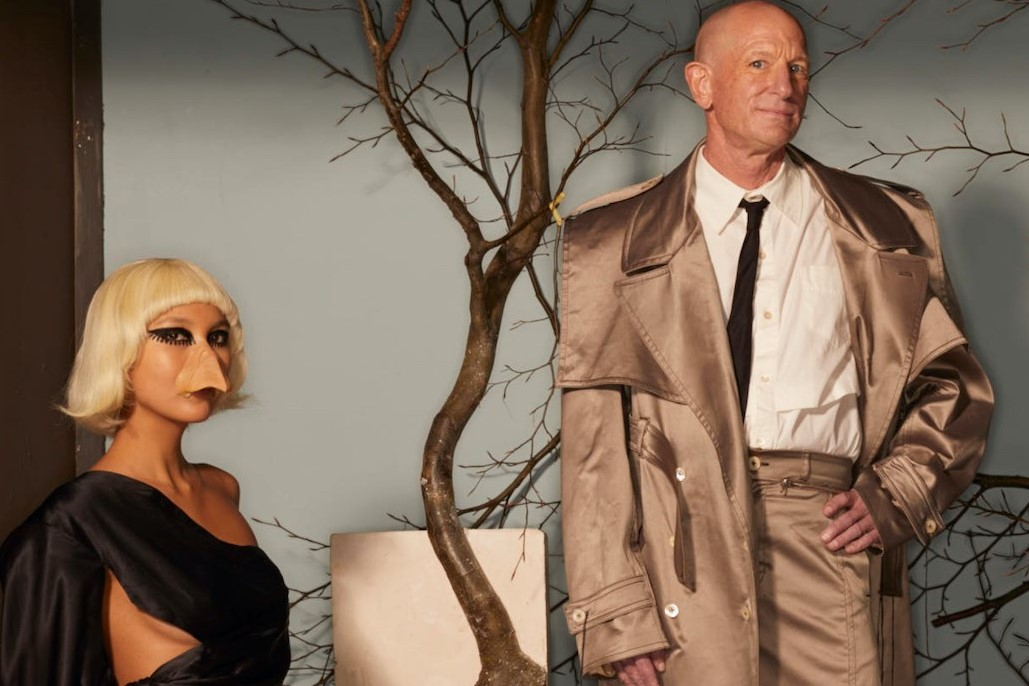 Amid the chaos of 2020, an unlikely fashion star was born. First landing on the scene via social media (where else?) Mark Bryan caused a sensation with his unique sense of style. As the epitome of business at the front and party at the back, the 61-year-old Texan matches slick suiting up top with feminine skirts and killer heels down below – which is pretty surprising when you find out Bryan is a happily married straight guy working in robotics in a semi-sleepy town in southwest Germany.

Citing Megan Markle’s character in Suits as his style icon, and describing his style as a ‘hybrid’ of masculine and feminine, Bryan’s penchant for a mini is less to do with gender bending, and more to do with just wearing whatever TF he likes. “I don’t have a feminine bone in my body, I’m 100 per cent masculine,” he says, laughing. “I’m not trying to make a statement – it’s just what I like to wear.” Already standing at six feet tall, Bryan stepped into his first stilettos almost 40 years ago and hasn’t looked back since. And while he’s never much cared what anyone else might think, moving to Germany, “where they’re a lot more tolerant and laid back about this kind of thing”, has made things far easier.

Unsurprisingly, Bryan’s attitude has been getting him noticed beyond the IG grid. In January, the grandfather of four starred in Martine Rose’s innovative AW21 show, as the London-based designer shone a spotlight on her global community and those who inspire her work. This week, he scored a pretty major cover, landing on the front of Interview magazine in this summer’s hottest fashions and more than a few pairs of Manolos. And now, he’s also landed his first high fashion campaign.

Stepping in front of the camera for Ninamounah, Bryan is one of the stars of the label’s SS21 series. With lockdown relegating us to our homes for much of 2020, the Amsterdam-based label, helmed by designer Ninamounah Langestraat and brand director Robin Burggraaf, turned its attention to its immediate surroundings. Unable to travel, instead, Langstraat and Burggraaf created a series of life sized taxidermy boxes within the confines of their studio and brought the outside in. Each structure’s interior provided a safe, sanctuary-like nest for the models housed inside, as they, alongside Bryan, became oddly beautiful species preserved in time – the likes of which you might find turning a corner inside a dusty, old museum.

“For me, those boxes are the most beautiful thing in museums, whenever I go to one I’m always so attracted by them,” explains Langestraat. “It was really amazing to play with this idea and put our muses in this kind of setting that only exists in fantasy, like they’re some scared, extinct species.” With the label’s SS21 collection, Nest, diving into its Dutch heritage, the idea references the fact the first ever attempt at mounting birds took place in The Netherlands back in the 1600s, while the clothing itself includes new iterations of historic Dutch garments that are twisted and subverted in Ninamounah’s own unique way. The label also leans heavily into hemp for the new season, given its home country is home to a huge number of farms manufacturing the sustainable material.

With Ninamounah known for its diverse, inclusive casting, when it came to centring rising star Bryan, the decision was a no brainer for Langestraat and Burggraaf. “To us, he is just such a special species. I think it’s so amazing that people like him exist, that he dresses like that and breaks all these traditional rules that clothing can carry on a day to day basis. Plus, he’s got really good legs,” Burggraaf explains with a laugh. “He also feels so good in his own skin, and being around him you just feel so comfortable,” adds Langestraat. “The clothes worked so perfectly on him, they just became a part of him. It was just instinctual.”

Check the campaign out in the gallery above. Follow Ninamounah here.