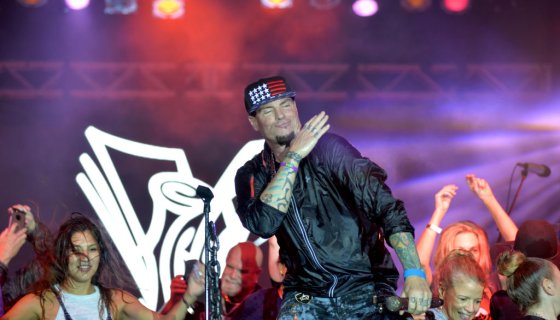 may have thought the pandemic was the perfect time for him reemerge back on the scene, but after fans gave their response to his upcoming concert he quickly saw he was not a vibe.

Earlier this week the 90’s rapper best known for his 1989 hit “Ice Ice Baby”, took to Instagram to announce he was bringing the 90s back to with a concert, despite public health officials advising the public to stay home.

“I can’t wait to get back to this. The 90s were the best. We didn’t have coronavirus, or cell phones, or computers,” Vanilla Ice wrote. “We had 5.0‘s, blockbuster, Beavis and Butthead, Wayne’s world, Chris Tucker and Jackie Chan. And Mortal Kombat is still better than Fortnight but we got out of the house, We danced, we invented house parties in the 90s. The last of the great decades #IMissThenineties“

I can’t wait to get back to this. The 90s were the best. We didn’t have coronavirus, or cell phones, or computers. we had 5.0‘s, blockbuster, Beavis and Butthead, Wayne’s world, Chris Tucker and Jackie Chan. And Mortal Kombat is still better than fortnight but we got out of the house, We danced, we invented house parties in the 90s. The last of the great decades #IMissThenineties

Despite the announcement coming when the state of is seeing a record number spike in confirmed cases, fans in the comments of his original announcement seemed to show little concern when the news hit Twitter, of course, the jokes began to fly about the lack of common sense being used overall by Ice for promoting the show, before fans began to inquire about who would even show up, begin with.

I wanna know who the hell is going to see Vanilla Ice in concert in 2020 regardless if there's a virus or not.

Although fans and foes alike had plenty of jokes, those who are wanting to attend the show are met with caution before proceeding to purchase the tickets warning of the possible COVID-19 exposure due to the possibility of being around a large crowd.

“Important notice re COVID-19: Please note any interaction with the general public poses an elevated risk of being exposed to COVID-19 and we cannot guarantee that you will not be exposed while in attendance at the event. The event organizer is solely responsible for the health and safety of this event. We encourage you to follow the organizer’s safety policies, as well as local laws and restrictions.”

While the warning is in place for those who purchase tickets, Austin officials and the Travis County Health Department issued an additional statement regarding the event, it stopped short of naming the event directly.

“This is not wise regardless of who is performing at any gathering right now. The best way to be nostalgic is by protecting your parents and grandparents and staying home.”

After receiving unfavorable feedback, issued an announcement that the show would not be moving forward.

“Hey guys, this is just a video to give you guys an update about the show in Austin and… I’m not going,” Vanilla Ice said. “I listened to my fans and the pushback and decided that this isn’t the best time. Honestly, I didn’t know that it had gotten so bad in Austin but I look forward to putting on a show for my fans sometime in the near future.”

imagine not only the sadness but the embarrassment on your family's face when they have to tell people at your funeral that you died from catching Corona at a Vanilla Ice concert.

Vanilla Ice had one song. A concert this does not make.

"A Vanilla Ice concert in 2020 at a Texas grill is the tipping point in a global pandemic that sends the world into Mad Max-style chaos" sounds like the plot of a movie on the Sci-Fi channel starring…Vanillia Ice https://t.co/IBJKWpVnOy

Sry but if you’re going to a Vanilla Ice concert these days you deserve to get COVID tbh pic.twitter.com/COMk15HfNi

i choose to die like my forefathers who founded this country:

at a vanilla ice concert pic.twitter.com/Z8N177mAtC

The lamest possible way to die, is to die because of Vanilla Ice's concert.#VanillaIce #coronavirus pic.twitter.com/fcUVXPle4E

What's the difference between a Trump rally and a Vanilla Ice concert?
The idiot on stage. #TrumpRallyFail #VanillaIce #ThursdayThought pic.twitter.com/yAm1tlgvip

The branding for the big Vanilla Ice concert is pretty cool pic.twitter.com/Btr9FppwOp

Kids: Dad, how did grandpa die?

Dad: Well you see, children, your grandpa was a brave, strong…aww screw it…he went to a Vanilla Ice concert during a pandemic