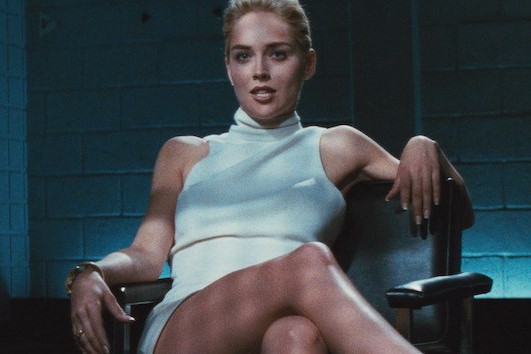 It’s the film that’s spawned a thousand frenzied pressings of the pause button during that interrogation scene; the one that made the case for the little white dress as a wardrobe staple of the femme fatale; the one that prompted covert glimpses under new lovers’ beds for fear an ice pick may be lurking. It is, of course, Basic Instinct, Paul Verhoeven’s irrepressibly over-the-top 90s thriller, now landing a newly restored version nearly 30 years after its original release.

The film stars Michael Douglas as Nick Curran, a disgraced San Francisco homicide detective with a weakness for whiskey and beautiful women, and Sharon Stone as Catherine Tramell, a wealthy heiress and novelist who Curran believes has murdered her ex-rockstar boyfriend.

Stone is magnetic from the moment she steps on screen, with her slicked-back, blonde hair à la Kim Novack in Vertigo, sardonic smile, and covetable putty-hued wardrobe dreamed up by veteran Hollywood costume designer Ellen Mirojnick (of Fatal Attraction, Showgirls, and Bridgerton fame). Douglas, meanwhile, is every inch the dapper, hardboiled investigator in custom Cerruti 1881 suits and tailored cotton shirts by Anto of Beverly Hills.

We follow the pair as they engage in a tantalising game of cat and mouse that’s as sexually fraught as it is nail-bitingly tense, leaving you hanging until the very last frame.

Throughout, Stone’s wardrobe does as much to keep us guessing as the actress herself, oscillating between pared-back staples in luxurious fabrics and chic, buttock-grazing dresses as Tramell veers convincingly between states of vulnerability and empowerment, leaving a trail of bewildered men in her wake (not least when she quite literally bares all in front of a panel of all-male detectives, in what has since proved one of cinema’s most talked-about moments).

Here, in celebration of the film’s re-release, we sit down with Mirojnick – a longtime collaborator of both Verhoeven and Douglas – to discover the stories behind its most seminal looks, as fresh today as they were 30 years ago, and the one thing she’d change if she could do it all again.

ON COLLABORATING WITH PAUL VERHOEVEN

“Basic Instinct was the first time I met Paul. It was a wonderful collaboration and I went on to do many other films with him. He’s an exceptionally smart man and a very truthful and committed director. He’s keen on every aspect of telling a story, and he’s very clear about what he needs and what he doesn’t need.”

“We wanted to portray Catherine as a very sophisticated and wealthy woman, with a colour palette motivated by her Hitchcockian, icy blonde way. There weren’t many warm colours; they were all very complementary to her skin tone, eyes, and hair. Her clothes range from cream, through a little bit of beige, to taupes, from grey-lavender – the suede jacket she’s wearing at Nick’s house –  to bronze for the disco dress. We used a lot of pieces from Hermès, and Barry Kieselstein-Cord designed the jewellery. It wasn’t dainty; it was heavy, gorgeous, and sculptural: perfect for Catherine.

Paul had worked with Sharon prior, on Total Recall, and he’d prepared us as to what she could be like – which was very opinionated, and quite difficult in her choices. But that didn’t stop me from creating the costumes and the theme that I did. And Sharon, as an end result, was actually very thrilled. At the first fitting, she couldn’t believe that the selection was for her.”

ON THAT LITTLE WHITE DRESS

“The costumes were quite dictated by what was happening in the scene; how Paul was going to shoot them. With this dress, Sharon had to disrobe from the previous costume she was in, step into the white dress, grab a coat, and walk out the door all in one, smooth motion because it was a steadicam shot with no break in the action. Then, for Sharon, she wanted to be able to sit in the interrogation room and expose her limbs like a man would if he was sitting there – you know, stretching out his arms, crossing and uncrossing his legs. Those specific needs dictated what the first intonation of what the dress had to be.

I remember doodling the dress on a piece of a napkin, while we were shooting at the house in northern California, and I suddenly said, ‘I think it should be white!’ And Paul said, ‘OK’. We realised it would be cold enough in the interrogation setting, against that steel grey, and warm enough in the house setting. We proceeded to do whites for Sharon from then on. Because her character was so unpredictable, this palette was a perfect canvas for her to exhibit whatever the point was of each scene; to do what she had to do without giving anything away.”

ON THE ICONIC NATURE OF THE INTERROGATION SCENE

ON THE DISCO DRESS

“The disco dress was inspired by Julie Christie’s black, backless sequin dress in Shampoo. This one was made from jersey, with hand beading that made it reflective. It was disco-ey but Catherine disco-ey – it elevated a disco look for her. Being backless meant that Michael Douglas could slip his hand into the dress in one motion, without it looking vulgar –  it could be a very sensuous move. It also needed to be able to come off in a minute for the lovemaking scene, and be light and thin enough for Sharon and Michael to do what they wanted with it.”

“Beth wore neutral browns and greens to compliment her dark colouring. Her clothing was very simple; it didn’t give her away either – she was professional, but not necessarily stereotypical. There was a little bit of a fluidity to her clothes, a softness and subtle sexiness.”

ON TURNING MICHAEL DOUGLAS INTO A DETECTIVE

“I think that Michael’s palette was in that range as well – a deeper taupe, with accents. I liked designing for him as a detective. I wanted to do dog shirts with tailored suits. The suits were more neutral – so that he could mix with both Beth and Catherine, and be spot on with the rest of the detectives too – and the shirts were deeper blues and greens.”

ON CREATING A CLASSIC

“There was a conversation I had with the producer Alan Marshall, where he said, ‘Are you really committed to Catherine’s dresses being so short? Because I wonder if that will be classic enough in years to come, or are we going to just reek of 1991?’ I thought about it for a minute and said, ‘I can’t see her in any other length. Her arms and her legs are tanned and beautiful, almost like a dancer’s. I can’t see Catherine, I can’t see Sharon Stone, I can’t see any of it with a longer length.’ I am so absolutely thrilled that I made the choices I made. The film holds up today on every level – the story holds up, the costumes hold up. It has remained a classic piece of new film noir, and I’m very proud of that.”

ON HER ONE REGRET

“When Michael goes to the disco he wears a sage green V-neck sweater and jeans, and I didn’t put a t-shirt underneath it because I wanted Sharon to be able to access his body easily, in the same way as he could hers. I don’t know if I would do that now, I have to say.”

ON THE IMPORTANCE OF BASIC INSTINCT ON HER CAREER TRAJECTORY

“When my career began, I was mainly asked to do contemporary film and I loved it because I was part of a community that was creating the history we would look back upon in the future; a period that you could reference to say, ‘This is what it was like then.’ And Basic Instinct, along with Fatal Attraction and Wall Street, and even, Black Rain, was part of a group of films that exemplified what it was to design contemporary film. It was a great time for storytelling, and for the contribution of costume design to the unfolding of a story in a modern way.”

Basic Instinct is available as a 4K UHD collector’s edition, as well as on steelbook, Blu-Ray, DVD and digital streaming platforms from today. Head here to revisit our interview with Ellen Mirojnick as she unpacks the looks from cult classic Showgirls.