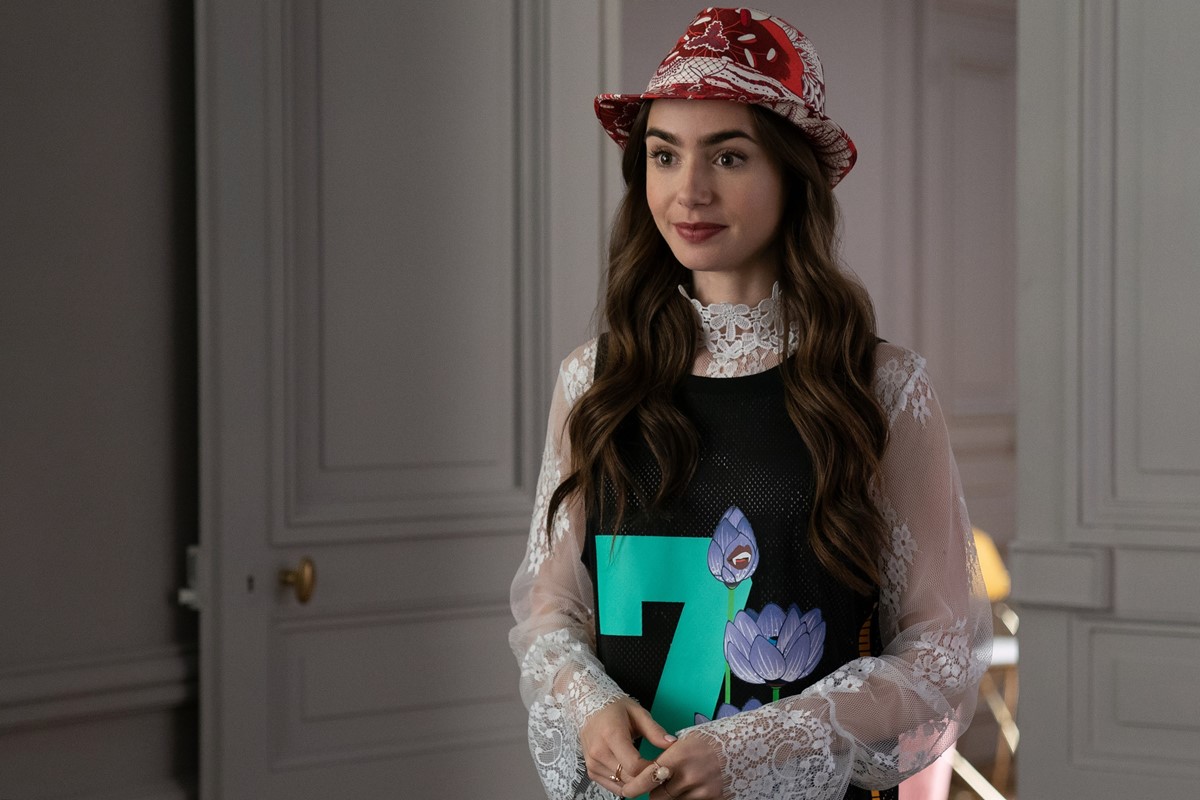 From Paris prints to Tabi boots: the new Netflix show has a lot to discuss

The ‘American girl in Paris’ trope is one that has been tried and tested over the years in film and TV. There was Audrey Hepburn in Funny Face; Gossip Girl’s Blair Waldorf; and Carrie Bradshaw, who flees the nurturing bosoms of her New York girl gang in order to elope to Gay Paree with Russian artist and absolute daddy Aleksandr Petrovsky.

As we know, Bradshaw’s move turned out to be a huge error of judgement – one that began with falling purse first in the Christian Dior boutique on the Champs-Élysées, and ended with failing to turn up to a party thrown by her biggest French fans (of which there were only four). Emily Cooper, star of new Netflix series Emily in Paris, which is also written and executive produced by Sex and the City creator Darren Star, would have done well to heed Bradshaw’s warning.

The show, which premiered on Netflix on October 2, chronicles Emily‘s time in (you guessed it) Paris. The script is written with the subtlety of Samantha Jones’ worst sex puns, colliding with cliches befitting of a Hallmark Christmas film. Cooper, a peppy young upstart from Chicago with a passion for social media engagement, played by Lily Collins, works at a marketing agency. While usually plugging creative social media strategies for bowel medication, things get a little more YSL than IBS as she hops the pond to offer ‘the American point of view’ at an agency in Paris that looks after luxury brands. She doesn’t speak a word of French or have any experience working in that sector. But et voilà! The scene is set.

The series’ costumes come courtesy of the one and only Patricia Field (also responsible for the lewks in SATC, and providing Andy Sachs with ‘The Chanel Boots’ in 2006’s The Devil Wears Prada). Without revealing too many spoilers – please, we urge you to watch this hot mess of a series for yourselves – here are some key fashion takeaways.

SHE’S WEARING A FLANNEL, BECAUSE SHE’S AN AMERICAN

Arriving in Paris, Emily is seen in a flannel shirt. She’s not gay, but she is a down to earth gal who’s just U-Hauled half her belongings across the Atlantic and is about to embark on a radical transformation from basic bitch to Balenciaga… sort of. Emily pulls open the curtains of her new apartment, closely followed by a French estate agent named Gilles, who, like most French men in the series, exists merely to attempt to seduce her. “I feel like Nicole Kidman in Moulin Rouge!” she exclaims, before snapping a selfie on her iPhone and uploading it to her new IG account named @emilyinparis, which intermittently pops up on-screen throughout the series showing a highly unrealistic follower growth.

AND SHE’S WEARING PARIS IN PARIS. BECAUSE… IT’S PARIS!

We are not sure how many times the word ‘Paris’ is uttered over the show’s ten episodes, but we also wouldn’t like to be the ones to have to count. Of course, During a board room meeting with her new team, who take an immediate dislike to Emily’s Americanisms and nickname her ‘Le Plouc’ (meaning ‘The Hick’), Emily attempts to mark her territory via a pair of Louboutins and an Alice + Olivia shirt that has been digitally printed with a tourist postcard of Paris. The metaphors Patricia Field presents us with here are strong: Emily might be a stranger in this city – and to the company – but she’s got an ‘American point of view’ to prove, and she’s going to damn well do it through the medium of fashion if it kills her.

HER LOOKS ARE MORE FULL ON THAN HER SLEAZY BOSS

If you were expecting a show about chic French girl style, this ain’t it. Subtlety is not Emily Cooper’s fashion speciality – even when she wears a classic cocktail dress, she can’t resist adding a kitschy handbag with a face on it. This heavy-handedness is clearly intentional: her looks are so full-on, so multi-layered and clashing and printed and high heeled to make her seem like the polar opposite of a chic Parisienne. But frankly, it’s a lot. From the Kangol bucket hat to the inexplicable rainbow straw disk on her head in one scene, Emily has never heard the age-old Chanel quote about taking one thing off before you leave the house.

“If you were expecting a show about chic French girl style, this ain’t it”

AND HOW IS SHE AFFORDING ALL THESE CHANEL HANDBAGS?

Speaking of Chanel… Much like Carrie Bradshaw in SATC, we couldn’t help but wonder… How is Emily affording all these clothes? Chanel jewellery and handbags feature heavily in the show, such as a pearl-embellished 2.55 worn on the set of a photoshoot and this sheepskin iteration that Emily wears whilst talking about her new love interest with her pal Mindy, played by Ashley Park. Maybe you earn a lot of money making IBS meds go viral?

HER TABI BOOTS ARE THE LEAST REALISTIC MOMENT OF THE SERIES

And that’s saying something. Emily, quite surprisingly, wears a beige Margiela Tabi boot in episode two, a snap of which you can see on the show’s official Instagram account. The rest of the outfit might be questionable – a jazzy bomber jacket? A polka dot bandeau top? A nude chiffon skirt? An interesting combination from Queen Patricia to say the least. But Tabis are a fashion classic: which makes the fact that marketing exec Emily would be in them less likely than her winning over the time and admiration of a famous couturier. But more of that below…

We couldn’t leave this article without mentioning Pierre Caudault, one of the series’ central figures – a fan-wielding fashion designer who is equal parts Lagerfeld, Gaultier, and eccentric uncle on the dancefloor at a wedding. As we learn, he’s the type of man who enjoys ordering a tray of crème brûlées not to eat, but to smash the sugar on the top for emotional catharsis. Upon meeting Emily and noticing her plush bag charm in the shape of a heart, he explodes with fury, ordering her out of his atelier and calling her ‘basic’. This moment then turns into an entire storyline, where Emily attends the ballet in a shoulder-baring dress and tiara, reminiscent of Audrey Hepburn’s Edith Head x Hubert de Givenchy Funny Face costume collab, before launching into a heartfelt speech to Caudault about how fashion needs basic bitches in order for it to survive. Quite simply put: LOL. If you make it to the final episode, you’ll also get to see some of his designs in action during #PFW, worn by models that, fittingly, jump out of a dumpster truck.

Emily in Paris is out now on Netflix.