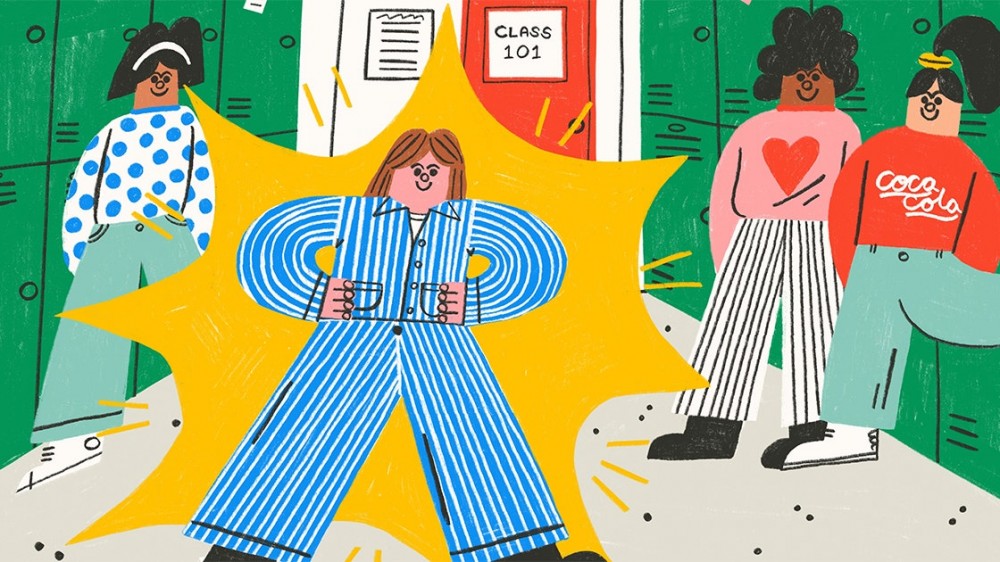 To listen to Adrienne Miller read this profile, click the play button below:

AT 14, all I wanted in the world was to be 40. What could have been more embarrassing and terrible than being a teenager? Adults were in charge, it seemed to me then, and adult life appeared to be governed by reason and rationality. I trusted adults. I had faith in adults.

Every Sunday when I was growing up, my parents would drive 20 minutes from my suburb on the east side of Akron to our Unitarian Universalist church on the west side. It was a great church. The congregants were freethinking, open-minded adults who worked to create an enormously accepting community, one that felt to me very far away from the slings and arrows of adolescence. The sermons that hit me the hardest were about how big the stakes were in adult life.

After church on Sundays, I would harangue my parents into taking me shopping across the street, at Summit Mall. This wasn’t your standard mall; its anchors were a Higbee’s and an O’Neil’s—two excellent regional department stores—and this particular O’Neil’s had a very special high-end fashion department: the Topaz Room. It was my own private portal to an adult world of elegance and grandeur, good manners and good sense.

Akron owed its past fortune to tires and Quaker Oats. In the ’80s, when I was growing up, there were still plenty of vestiges of the city’s former prosperity—the Civic Theatre, a tour de force of Moorish, atmospheric maximalism designed by the architect John Eberson, and the grand Tudor Revival mansions on Merriman Road. I remember going to the opening night of a play with my parents at the Goodyear Theater—Akron had quite a thriving arts community—and, in a grand wood-paneled room stood an array of pastel-colored petits fours arranged on tiered silver trays. The Topaz Room was still heroically clinging to the last threads of this fading splendor. It was, as Melissa Holbrook Pierson writes in her beautiful memoir The Place You Love Is Gone, the “sanctum sanctorum for the fashionable Akronite.” But I didn’t know that then. The Topaz Room felt as if it were my own private discovery.

My parents never had much of an interest in clothing, so they would drop me off at the Topaz Room and wait for me, sometimes patiently, sometimes not, in O’Neil’s less dazzling departments. The Topaz Room was on the first floor, windowless, and located in the back of the store. When you entered, you found yourself in a tranquil, autumnal place bathed in sherry-colored light. The room always seemed to smell of some sort of mysterious spices. Were there candles? There must have been candles. Being in the Topaz Room was always a very emotional experience for me. It wasn’t really about buying things. It had to do with my imagination—about what I wanted adult life to be. The saleswomen were always so kind, and they treated all customers, even children like me who had absolutely no business there, with equanimity. They’d let me loiter over the clothes, touch the clothes, try on the clothes in well-appointed, beautifully lit dressing rooms.

I remember guipure lace, cashmere Fair Isle sweaters, luxurious silk blouses with delicate puff sleeves, front-button midiskirts that I would have worn with lace-up riding boots if I’d had any. I remember Donna Karan bodysuits—a sage-colored silk one with small brass cuff links captured my imagination forever. There were exuberant patterned dresses. (Were they Ungaro?) A Calvin Klein Collection sweater vest, gorgeous camel-hair coats, chestnut-colored suede pants. I recall the meticulous gold embroidery on Carolyne Roehm jackets that would have fit right in at a salon in Vienna—in 1790. Who was wearing such finery in Akron? Where were they going? Could they take me with them? But maybe these were the wrong questions to ask.

To grow up in Akron meant that you didn’t go around thinking you were any better than anyone else. We were realists, clear-eyed observers of the truth. We were insecure that we weren’t from Cleveland. Wearing fashionable clothes was seen as a suspicious activity because it was a way to set yourself apart from other people. I was beginning to develop another view. Was it possible that being dressed well was actually a way of showing respect for others? And isn’t that what adults did? They treated other people with respect and dignity?

I was an everyday sort of girl, but it seemed so very important to dress with adult-level dignity

When I was 15, I finally found it. There it was, the pièce de résistance, hanging in a place of honor on a front rack in the Topaz Room: a pinstripe Ralph Lauren Collection pantsuit, navy blue, and lined in silk. Wide cuffed legs. I tried it on. Simple, elegant, eternal. It was perfect then, it would be perfect now, it will be perfect forever. This, however, was not the sort of thing I could get away with at school. Acid-washed jeans were huge then. Big hair, scrunchies, Coca-Cola branded sweat-clothes. In the warmer weather, kids at school (boys and girls both) would wear Jams (remember Jams?), tropical-patterned shorts that hit right above the knee. I did not approve of any of this. I was just an everyday sort of girl, with braces and a bad complexion, but it seemed so very important to respect yourself and to respect others enough to dress with adult-level dignity.

The main problem with the Ralph Lauren suit: I couldn’t afford it. Of course I couldn’t. I was 15. But I did have a job, sort of. I babysat the two kids who lived next door. Word of my babysitting services soon got out in the neighborhood, and another set of parents asked if I’d babysit for them, and then another. Pretty soon, I had a sweet little business going. That babysitting money added up. I saved every dime. I happened to have been born a middle-class person at just the right time, and in just the right place—in the glory days of a somewhat faded but still-magnificent city—and I needed the babysitting cash for one thing only: the suit. Every Sunday after church I’d ask my parents to take me back to the Topaz Room to confirm that the suit was still there. It always was. Sometimes I’d try the suit on again. Eventually, it was moved to a sales rack in the back of the room. The Sundays passed, and I watched as the price on the tag was cut, and cut some more. (The Topaz Room always had such tremendous sales—a warning sign I didn’t know enough about the world of commerce to heed.)

With my cobbled-together babysitting money, accumulated over the course of many months, I was finally able to buy the suit. Naturally, I wore it to my main babysitting job. I loved those kids and treasured them enough to be ludicrously overdressed as I made them boxed macaroni and cheese, and as we watched Ladyhawke for the 10,000th time. When I wore the suit to school, the formidable French teacher, on study-hall duty in the cafeteria, approached me at the long table. She leaned down to speak. (But why? I didn’t even take French.) “You look very adult,” she said. This remains one of the most exciting moments of my life.

In my 10th-grade class picture, I’m wearing my glorious pinstripe suit. My braces had just come off, and I’m smiling as I’d never smiled before. I looked like a child playacting the part of an adult, but what did it matter? I was so happy. The Topaz Room taught me that clothes are dignity. They are joy.

Adrienne Miller is the author of the memoir In the Land of Men and the novel The Coast of Akron.