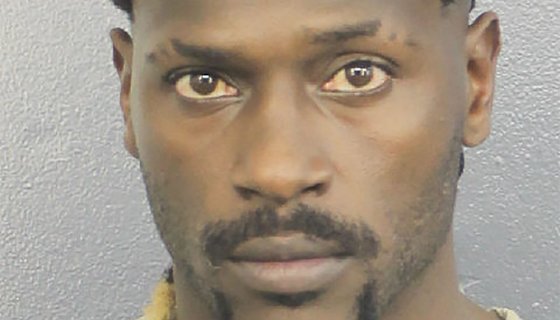 needs some serious help. The currently unemployed NFL star wide receiver has surrendered to the police after more strang behavior—and his mugshot is notable for its struggle.

A warrant was issued for Brown’s arrest after he allegedly threw a rock at a moving company van after a dispute over a delivery to his Hollywood, FL crib. Somehow, Brown’s trainer, Glenn Holt, was involved and was arrested. The alleged victim claims Brown and Holt put hands on him.

Holt was arrested on a felony burglary with assault or battery charge and bailed out on Wednesday (Jan. 22). But for some reason (actually, because he locked himself in his home), Brown was not arrested at the time of the incident.

TMZ reports that Brown surrendered last night (Jan. 23), and of course it has already been drama-filled process.

Brown was charged with burglary with battery, burglary of an unoccupied conveyance and criminal mischief. Appearing before a judge this morning, prosecutors are urging he be held without bail, claiming that he is a flight risk. Brown’s lawyers contend their client won’t be going anyware while downplaying the severity of the incident.

“We’re talking about scratches,” reportedly said one of Brown’s lawyers.

Recently, Brown was unceremoniously . There is also the time he during an argument.

The struggle that has become Antonio Brown is surely exemplified by his mugshot, which you can see above. Life comes at you very fast.