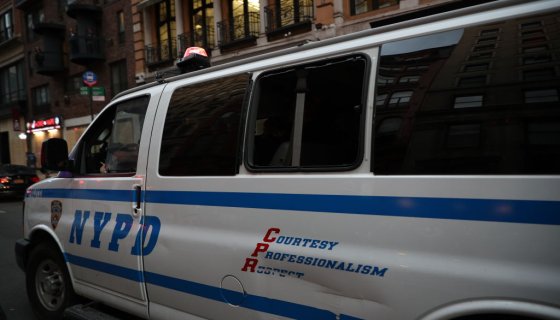 beware: The NYPD are being given the green light to put y’all in the hospital or even a casket, allegedly.

With videos of police brutalizing, racial profiling FBI agents, and arresting protestors (not just looters) across the nation, new audio has emerged that reminds us that police can use deadly force at any given moment regardless of how peaceful a protest may be. TMZ has obtained a recording from an NYPD scanner that reveals police were encouraged to not just use their vehicles to mow down American citizens, but to also turn their guns on them and shoot if they felt necessary.

In the recording that’s sure to outrage listeners who are protesting murderous police officers, an officer called in a situation that saw protestors blocking police on Albany and Dean Street in Brooklyn when all of a sudden he was told to “Run them over!” and “shoot those muther*ckers!”

Tell us how you really feel, “officer.”

Of course the officer suggesting more police homicide asked them to not “put that over the air” but that didn’t work out too well. Also it seems like someone in uniform got the memo as the scene in Brooklyn this past weekend included some police cars rolling through protestors barricades as if they were bowling pins in the street.

No word on who gave the order to murder more innocent people but the NYPD have said they’re aware of the transmission and are looking into it. In other words, oh well.

Meanwhile in the Bronx a police officer was actually the victim of the very order that was given to Brooklyn police as he was literally ran over by a car while police were investigating the rioting and looting that was in progress at the time.

Cop was just hit by a speeding driver in the Bronx 👀pic.twitter.com/ysIpoxKj80

It’s truly sad that it’s coming to this but when the people in power set the example what can you expect from the masses?