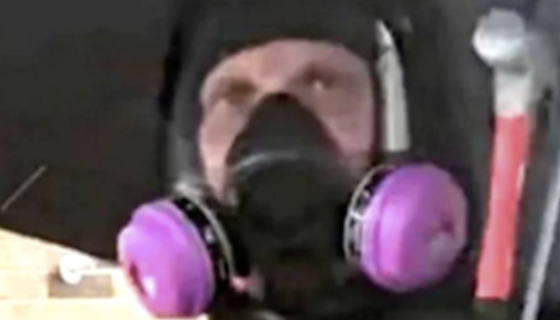 Everyone should give a slow-clap for police finally finding the man who started the riot in Minneapolis months back.

When protests erupted in May over the senseless death of the city erupted into an emotionally charged protest heard all around the world.  On-the-ground footage flooding social media timelines showed angry protestors crowding the streets while demanding justice for another life lost due to police brutality.

One video, in particular, recorded an intimidatingly tall, white male dressed in all black defacing a local AutoZone store. While holding an umbrella, the individual, aptly nicknamed “Umbrella Man,” is seen taking a sledgehammer and breaking the store windows. Protesters confronted him before he eventually walked away.

Hours later, the store broke into a fiery blaze. This became the powderkeg that filled with looting and arson across the city.  Before that point, the hundreds who hit the streets were until their untimely clash with local police dressed in riot gear.

If you followed along on Twitter, you might have seen users suspect Umbrella Man of being a white supremacist maliciously starting trouble during the chaos. Even Minneapolis Mayor Jacob Frey took to Twitter to share his suspicions.

We are now confronting white supremacists, members of organized crime, out of state instigators, and possibly even foreign actors to destroy and destabilize our city and our region.

Turns out, they were right.

After months of silence, Minneapolis Police finally identified the man as a 32-year-old white supremacist associated with the biker gangs Aryan Cowboys and Hell’s Angels. Cops say his intention was to fan racial tension and incite violence during peaceful protests.

“This was the first fire that set off a string of fires and looting throughout the precinct and the rest of the city,” police arson investigator Erika Christensen wrote in a search warrant affidavit filed this week in court. “Until the actions of the person your affiant has been calling ‘Umbrella man,’ the protests had been relatively peaceful. The actions of this person created an atmosphere of hostility and tension. Your affiant believes that this individual’s sole aim was to incite violence.”

Christensen said the suspect was identified through an email tip received last week.

Police also connected this individual to an incident in Minnesota involving a white supremacist group harassing a Muslim woman and her 4-year-old child.

Due to an ongoing investigation, cops are conveniently keeping Umbrella Man’s identity hidden. Shocker. We don’t support doxxing, but if you search hard enough, Facebook and CSI Twitter may have cracked the case already.