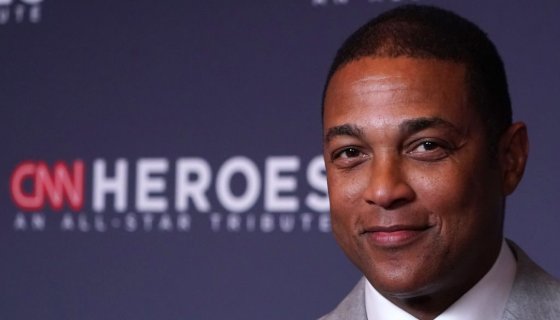 CNN Tonight with host tackled Secretary of State Mike Pompeo allegedly attempting to debunk an NPR reporter’s knowledge of Ukraine’s location on a map and the fallout that ensued. Guest panelist GOP strategist Rick Wilson took a dig at President Donald Trump with a joke that caused Lemon to laugh uncontrollably during the segment and got a response from the former business mogul.

On Monday (Jan. 27) Lemon introduced the segment with quotes from Secretary Pompeo in where he says NPR reporter Mary Louise Kelly lied to him twice and actually pointed to Bangladesh on a map instead of Ukraine, in what appears to be an attempt to delegitimize the media’s findings and discussion around the controversial matter.  Lemon mentioned that Kelly holds a graduate degree in European Studies from Cambridge University before giving Wilson the floor.

“Donald Trump couldn’t find Ukraine on a map if you had the letter “U” and a picture of an actual, physical crane next to it,” Wilson said, driving Lemon to laugh so hard that he placed his head on his desk.

With Lemon unable to regain his composure, Wilson piles on with the slander while saying that the Trump administration is trying to appeal to its base while essentially stating that they largely don’t care about the facts. What got some Trumpers upset was Wilson’s use of a southern accent in a mocking tone, failing to realize he too is from the south.

President Trump’s disdain for CNN was once again on display as he took the time to mention Lemon by name while sharing a tweet from the Daily Caller, although it was Wilson who made the joke.

“Don Lemon, the dumbest man on television (with terrible ratings!),” read the caption in the video featuring the CNN segment. Other right-leaning publications have also blasted Lemon and CNN over the dig but on Twitter, critics of Trump are having a field day with the moment. We’ve got those reactions below.

The question we want to know the answer to: CAN you find #UCrane on a map? pic.twitter.com/0rOjq3lQ0p

Rick Wilson went on CNN and told the #UCrane joke about Trump.

All Don Lemon did was laugh.

Yet Trump is responding by attacking Don Lemon, the black guy, while ignoring Rick Wilson, the white guy.

Trump is as much of a racist as he is a coward.https://t.co/6c9xGFraqN

We did. Not going to apologize for it either. If you're willing to believe and promote these absurd and dangerous lies, well, you deserve to be mocked for it: "CNNs Don Lemon Cracks Up As Rick Wilson, Wajahat Ali Trash Trump Supporters As Ignorant Rubes" https://t.co/gK3s42yj6c

So America's conservatives are fine with grabbing unwilling women by the pussy but aren't fine with laughing at a joke? Well fuck you! And stick your votes where the sun doesn't shine! #TuesdayThoughts #DonLemon #CNN #TrumpIsGuilty #racism

This video of Don Lemon and Rick Wilson bothers the hell out of Trump. He hates it when people mock him. So please be sure to share and post this video everywhere! pic.twitter.com/YHfRHihIX4

Listen! That clip of Don Lemon’s show clowning the neanderthals of the republican base is funny👏🏾to👏🏾me👏🏾

He won't be running against Don Lemon or Rick Wilson. Trump's failings are manifest, and that is the issue in 2020, not the behavior of some people who oppose him. https://t.co/d7nt9K0kLv

He incited this kind of hate, but you’re offended? GTFO with that hypocrisy. pic.twitter.com/ShmZytZwxH

So #MAGA is more upset at Don Lemon laughing at an impeached President than a complicit Senate Majority leader stonewalling witnesses of a crime to which #IMPOTUS ADMITTED committing.

My FAVORITE conceit from #UCrane from Trump fluffers goes something like this:

"Well, NOW that you've insulted my honor, I TOTALLY voting for Trump in 2020. I was on the fence, but you elitists pushed me to Trump!"

Uh huh. NO one who is engaged in this fauxrage was on the fence

"I was totally gonna vote for Biden until you made fun of the boomers on a network I don't watch."

Poor Nepotism Barbie. The Trumps can dish it but can never take it. #UCrane https://t.co/0qqtyGW3Ad

I’m going to retweet this every time it shows up in my feed. #UCrane https://t.co/vNTTExhBmR