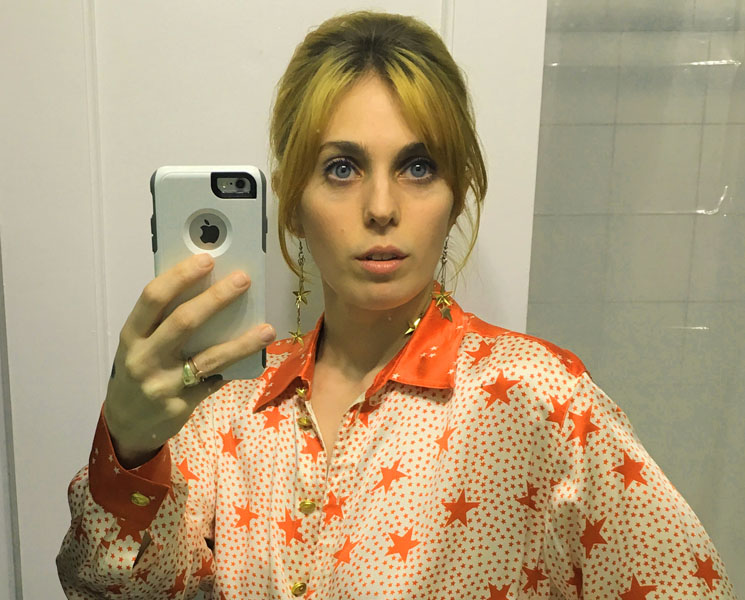 On her last album as U.S. Girls, 2015’s Polaris Music Prize-shortlisted Half Free, Meg Remy’s sample-based songwriting reached storytelling heights only previously hinted at by turning a spotlight on women’s lives. She used each song to explore “a different female character that was expressing some sort inner narrative,” she told Impose magazine that year. But where Remy tried to occupy a neutral, almost journalistic space in telling the stories Half Free‘s women, new album In a Poem Unlimited holds nothing back. Remy’s pissed.

“When I started making Half Free,” she says, “Trump was just starting to make noise about running.”

The release that minimalist record, which found Remy singing over distorted dub, soul and disco samples, was imminent, and she was about to play a show when she watched the first Republican debate.

“I was so upset that I lost my voice. The show I had to play, I had no voice, but I was so pissed, I was, like, screaming onstage. Making In a Poem Unlimited] around the time that he was nominated, everything became so unreal that you couldn’t even be scared; it felt like a glitch in the program, so it also felt like I was free to do what I want.”

Remy embraced her anger, channelling it into songs like “Mad As Hell,” about the way Obama’s charismatic public image obscured his trigger-happy drone strikes; “Incidental Boogie,” about a woman who equates physical abuse with love; and “Pearly Gates,” in which St. Peter abuses his position divine power to coerce women into sex before entering heaven.

If Half Free shone a spotlight on the lives women, In a Poem Unlimited moves it slightly f-centre, illuminating the men lurking on the shadowy periphery. It ten turns ugly, as on “Velvet 4 Sale,” in which one woman implores another to get a gun and confront the man that’s abused her: “Don’t fer no reason,” she sings; “Instil in them the fear that comes from being prey.”

It’s a righteously angry and exhilarating song, from its propulsive breath-based opening percussion and densely harmonized chorus to the revenge fantasy lyrics, but look closer and you’ll see the nuances that, though they’ve long defined Remy’s work, stand out even more starkly here. In the song’s second verse, the first woman fers to the second that, “This’ll surely feel against your nature, but girl, you gotta move on; guarantee at least one bullet goes behind the eyes, because they always could come back for more.”

Using the gun feels “against the second woman’s] nature,” and why not? Even in a revenge fantasy, Remy’s characters aren’t femmes fatales — they’re human beings.

“So much the stuff that plays with this female fantasy revenge stuff…” Remy pauses; “I feel like a lot it that I’ve consumed is made by men. And it’s like, ‘That’s not how it would be!’ I was thinking, if you were armed, would that make you feel different, would you find a secret confidence and power? I don’t think so. It would be conflicted; there would be more going on there. I’ve had interviews for this record where the interviewers were like, ‘All your characters are like Quentin Tarantino characters.’ It’s like… okay. They’re not supposed to be sexy.”

Adding another layer complexity to the thematic darkness the record is the fact that, sonically, these are some the most musically buoyant U.S. Girls songs to date, wrapped in funk and disco genre tropes and sparkling, radio-ready production.

“A spoonful sugar makes the medicine go down, you know?” Remy explains. “It’s that concept, knowing full well that if I wanted to really go for it with the lyrics, I’d have to wrap it up in something that was not scary, that was digestible.”

More simply, though, these are just the sounds she wanted to explore. Remy hired a band and producers that would turn the samples Half Free into full-bodied funk, pop and soul songs, replete with saxophone and a robust rhythm section.

“The production, and the actual music, just kind went insanely in the pop direction once we decided to do that — that was partly because the people we collected to play on the record. There are a few different writers on the album, some which I’ve been writing with for a while — one them is my husband, Max Turnbull; another is Louis Percival, who goes by the name Onakabazien; and this guy Rich Morel, who’s from the States — who understood what we were trying to do, understood the language and the song concepts and were able to really nail it.

“I’m a musician,” insists Remy. “I’m not a lecturer, or a researcher. I want to have fun, and I want listeners to have fun as well, but you can have fun and think at the same time, and work towards a greater good.”

That ability to marry seemingly incongruent things — murderous revenge fantasy with emotional nuance, sad messages with upbeat funk — is reflective Remy’s mindset these days. The world is a terrible place, she knows, but she’s been able to carve out a space happiness and distance from which she can confront it and call it out.

“From a young age, I suffered abuse, and I was basically told, ‘Deal with it. It’s part life. Men do these things, and it’s our job to not let them crush us, but carry on and don’t say anything.’ There was a succession things, growing up, and it wasn’t until I moved out the U.S. that I identified that anger.

“Having a border between me and my past made me fearless. And being in a new family, my chosen family — my husband and his family and my friends and collaborators — made me realize how much better it could be. Knowing that I was supported emotionally made it so that, ‘Oh, I can be pissed now! I can say these things. I can be seen.’ All instinct and the world is telling me, ‘Stay home, read books, maybe go back to school,’ but the pot is boiling right now. I have to say this stuff.”