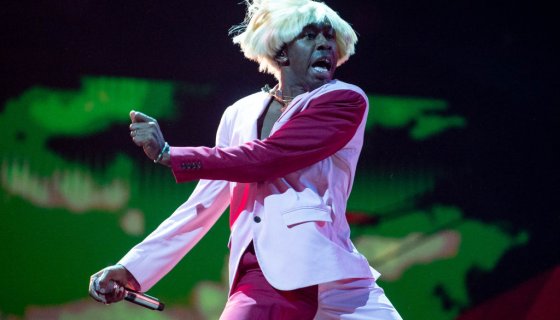 took to the stage in the early moments of the 62nd Grammy Awards to perform a mini-medley of songs from his Grammy Award-winning album, IGOR. After his high-energy performance, the former Odd Future honcho slammed the Recording Academy and its simplified classification of genres for artists like himself.

Joining Tyler onstage, who was dressed in the same blonde hair and disco pants suit getup that he donned in the “Earfquake” video, opened with that song with Boyz II Men and Charlie Wilson soulfully crooning before a dozen or so others dressed like Tyler took the stage to rock out on the “New Magic Wand” track, the latter he’s said was his favorite track he’s ever recorded Twitter last year.

The production value of Tyler’s performance signaled that he has truly arrived as one of the music industry’s elite, and it was clear that the Los Angeles native’s arresting stage presence would stick with viewers at home and those in attendance long after it was done.

Tyler’s fifth studio album IGOR took home the Best Rap Album trophy and it didn’t appear that he expected to win given his carefully-worded acceptance speech. Tyler praised his mother, who stood alongside him with her face drenched in tears and it was apparent that the bond between the pair is strong. Tyler’s “day one” as he referred to him as, Jasper, stood behind him as well as he accepted the award and doled out a warm embrace.

Backstage after winning the award, Tyler addressed the media throng and possibly disinvited himself from future shows with his comments aimed at the Recording Academy’s voting process. He also said that the Academy’s use of urban as a category feels like a “politically correct way to say the n-word.”

Check out a clip of the comments below.