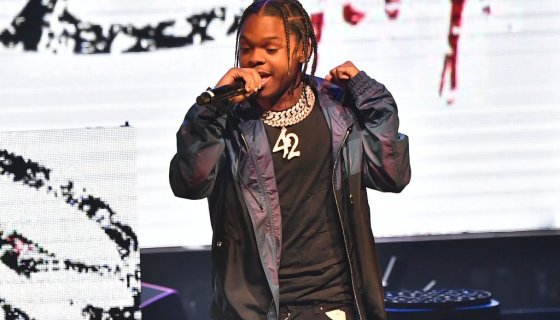 Rising Detroit rapper has made the most of his alignment with and the 4PF movement, starring alongside his label chief on a pair of charting tracks. Fans on Twitter are in an uproar after a snippet of a new song leaked with many mishearing 42 Dugg’s slurred, mumbled flow as if he’s out here delivering that mouf work.

The untitled track shows 42 Dugg clearly rapping the lyrics, “HOES OUT HERE SUCKIN D*CK… I WAS TRYNA PAY HER RENT,” which Dugg tweeted earlier this evening (July 21) to stave off the chatter and illustrate the actual bars.

A clip of 42 Dugg saying some questionable things in an unreleased song has surfaced 😯🤦‍♂️😭 pic.twitter.com/WaMYm7ylIS

Of course, Homophobic Twitter and Reaching For A Joke Twitter stans got 42 Dugg’s name trending, which. makes one wonder why anyone heard his lyrics any other way despite the garbled delivery.

Even with the correction, Twitter got those jokes off and we’ve collected some of the best below.

HOES OUT HERE SUCKIN DICK… I WAS TRYNA PAY HER RENT 🤷🏽‍♂️

42 Dugg was out here DOING what bro ??? pic.twitter.com/Yku9eGzX0E

After seeing the reason why 42 dugg was trending🤦🏼🤦🏼🤦🏼🤦🏼💔 pic.twitter.com/sBdrKZ3mYf

“Bruh you really said that shit in your verse?”

Me after listening to that 42 dugg snippet: pic.twitter.com/btACM3VHqw

Lil baby when he sees this shit pic.twitter.com/KvYlr6GHtc

42 Dugg: I was out here sucking dick I was tryin pay the rent

this how the niggas were in the studio with 42 Dugg when he made that snippet 😭 pic.twitter.com/OVisfWQzj5

How the landlord was looking at 42 Dugg when rent was due pic.twitter.com/M1WYErNPyz

Lil baby after 42 Dugg said he was sucking dick to pay rent pic.twitter.com/zJVO1Ha8g6

the lgbt community after hearing what 42 dugg said pic.twitter.com/Dn4gnNzRwC

42 Dugg when it was the last day of the month and rent due pic.twitter.com/r7rESCUPGE

When 42 Dugg said “I was out here sucking dick, I was tryna pay the rent” a lot of y’all hoes felt that