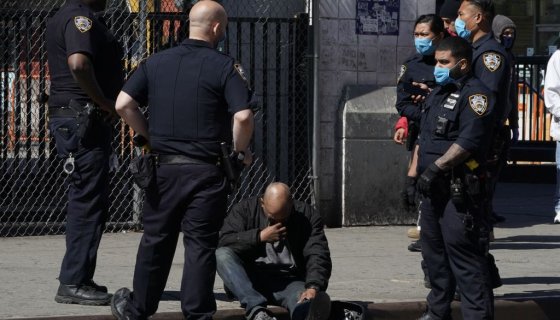 It’s literally night and day and a tale of two cities when it comes to how the is enforcing social distancing rules as NYC still battles the spread of .

Twitter has spotted the jig pointing out the excessive ways the NYPD is enforcing social distancing rules in Black and Brown neighborhoods compared to predominately white stomping grounds. Multiple videos have hit Twitter, showing police using unnecessary force after confronting Black and Brown men who were either not wearing masks and congregating not practicing social distancing rules.

In one video recorded on a smartphone shared by criminal defense and civil rights attorney Rebecca Kavanagh, three cops can be seen aggressively pinning down a Black man while one of the officers repeatedly punches him. It’s also quite hilarious that one of the officers enforcing social distancing rules and wearing masks is not wearing a face cover while trying to arrest the man.

Cell phone video shot last night in Brooklyn, shows an NYPD officer punching a Black teenager in the head as he is lying on the ground with his hands cuffed behind his back.

The cop then takes the person filming into custody.pic.twitter.com/Ek1bT0iK3G

In another instance shared by a congressional candidate and co-founder of Black Lives Matter, Greater NY Chivona Renée Newsome features fellow activist Hawk Newsome also being arrested. In the clip, an officer who happens to not be wearing a mask warns Newsome that he is giving him a “lawful order to disperse” Hawk then responds, “We’re standing six feet away.” Hawk then calls out the NYPD for another incident that involved Officer Francisco Garcia being recorded beating a man for failing to social distance.

This video shows an unarmed man being assaulted by a police officer. The man was merely an innocent bystander, who was checking on a young man being roughed up by the cops. The officer approaches him, starts firing his taser, and then assaults the man for no reason. This is terrorism.

As he walks away, he yells, “This is our community, they are outsiders!” the cops more than likely were not pleased with Hawk’s comments swarm him and then put cuffs on him.

A family in Melrose Houses in the Bronx was mourning the loss of their aunt today when police officers stormed out of their squad car and jumped their 15 year old son. The child’s father, mother and uncle came to his aid and the cops respond by pepper spraying their entire family. BLMNY Chairman Hawk Newsome was peacefully recording the incident after to make sure the police didn’t brutalize anyone else. While he practiced social distancing they inched closer and the police proceeded to aggressively surround him, smack his phone out of his hands and arrest him. While white folks are being given refreshments in the park by police during COVID-19, black people are being harassed and brutalized in their communities. #freehawk @washingtonpost @nytimes @nypost **Our legal team is handling it, and will let you know of any further info**

Twitter has wasted no time in sharing two different pictures of NYPD officers handing out masks to white park goers who don’t have masks while slapping cuffs on Black men. Even Stevie Wonder can see what the hell is going on.

Here is the striking disparity between NYPD enforcing social distancing in communities just 2.6 miles away from each other. pic.twitter.com/eas54P1pv7

You can peep all of the reactions to the jig in the gallery below.

The NYPD is rotten to its core. pic.twitter.com/8pbX8Y2Hm7

NYPD are out in full force, stopping and arresting people and broadcasting orders for people to disperse like it is a militarized zone. pic.twitter.com/KsHvsHZHxk

The NYPD is trying to police a pandemic. What does this look like? Over-policing of Black and Latinx communities. https://t.co/z0r7m3G0pN

Police pepper spray and tased a group of Black family and friends grieving at a funeral in the #bronx #StayWoke Why the sister got more heart to fight back than the brothers standing around filming? 🤦🏿‍♂️ pic.twitter.com/nJKajXiQwl

Rarely the first time. The abuse ratchets up after repeatedly getting away w/ it. This cop: “More than half a dozen misconduct lawsuits in five years, costing city taxpayers nearly $200,000.” The job w/ the most responsibility has the least accountability. https://t.co/oJGqwr50PE

Tell me that we're overreacting about police brutality, systematic racism, that it "doesn't exist". NYPD officers beating a black man for not social distancing vs NYPD officers handing out masks to white people while they don't social distance. This is bullshit. pic.twitter.com/HDjLgxe28Z

Selective enforcement will not be tolerated.

The phony criminal charges against Mr. Wright must be DROPPED immediately.

And the police officer who brutalized him should be criminally investigated.

Bias policing by the @NYPDnews @NYPD75Pct of Black Youth regarding #SocialDistancing. This does not happen to white people who violate social distancing. They are using the #pandemic as a weapon for further brutality. @NYCMayor @NYPDShea bring your rabid animals to heel! pic.twitter.com/d2maQYhokg

According to reports, the city of #NewYork has already paid out money for previous lawsuits centered on Officer Francisco Garcia, the #NYPD officer who slaps the young man & eventually holds him down with a knee to his head. Don’t endanger more lives with this officer, @NYCMayor. https://t.co/8neKkSBOiy

What directive is NYPD working under? These officers beat a handcuffed Black teen then looked for & created a confrontation w bystanders. https://t.co/ABv6jJvPBL

NYPD is literally DARING us to organize. We will not allow you to take advantage of this pandemic to continue to terrorize Black boys in our city. At least when we protest it won’t because we want a haircut, it’ll be because we want to defend our communities and neighbors.

The behavior we saw in the video of this incident over the weekend is completely unacceptable. Now we know the officer involved has a history of misconduct. He does not belong on the police force. https://t.co/1qtVhDGTMB

Fire Officer GARCIA HE PUT YOUR OFFICERS AND CITIZENS IN JEOPARDY WITH HIS CONDUCT I QUESTION WHAT HE HAS DONE OFF CAMERA @NYPD @NYCMayor @NYPDShea. #FirstLady https://t.co/Etbhj4b5nd