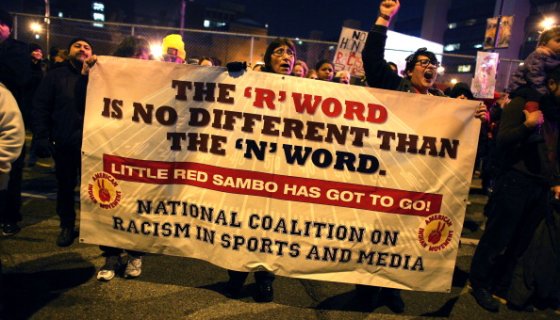 Dan Snyder, the owner of the , woke Thursday (July 16) to his name trending across Twitter. The reason might be connected to a bombshell story promised by The Washington Post, prompting many on Twitter to suggest Snyder is due for a severe reckoning.

The Washington team perhaps fostered a small bit of goodwill a drawn-out publicity stunt to call out attention to dropping the racist slur used as a nickname for the squad. This came after several vendors and sponsors cut ties with the team despite years of protests and demands from indigenous people and the like.

While the Post’s story has yet to go live as of this writing, many on Twitter are throwing out a variety of angles. One such theory is that Amazon’s Jeff Bezos is in talks to buy the team and that the story will force Synder to vacate his role as owner, clearing a path for the transition.

We’ve got some of the reactions listed below.

Bezos wants to buy the team. Washington Post has a bombshell story that will supposedly force Dan Snyder to sell the team. Guess who just happens to own the Washington Post? Coincidence?? @Redskins

Reporters & Washington Post: “We have some vile and wicked information involving Dan Snyder”

People: “So tell us everything now”

Person from the @washingtonpost walking away from their PC after hitting submit on the Dan Snyder story and their servers crash pic.twitter.com/upL1b19fBN

Dan Snyder has been a notorious scumbag for years. Rumors are the Washington Post will release a tell-all article about the team and owner.

What makes this even more juicer is that Jeff Bezos owns the Washington Post. He could be clearing an open seat for himself to own the team

Every member of the local media coming together to bury Dan Snyder tomorrow: pic.twitter.com/hBF0T3apgt

Yo, hearing some big stuff is about to go down in D.C. Article supposedly coming out in the Washington Post regarding #Redskins owner Dan Snyder??? pic.twitter.com/PACok9Ewqo