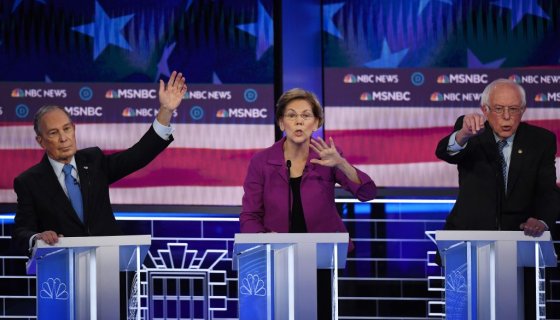 The Nevada Democratic debate has concluded and, per usual, the experts and analysts are breaking down the event to the smallest element. If Twitter’s reaction to the debate is to be valued highly, many viewers believe that Sen. Elizabeth Warren dropped that “Ether” on , , and the rest of her opponents.

Twitter fans woke early Thursday morning (Feb. 20) to see “Ether” trending, leading many to think the 2001 Nas diss track aimed at Jay-Z was being discussed. However, the track itself was being used as a verb to describe Warren’s showing at last night’s debate held in Las Vegas, Nev.

Sanders is currently expected to win the Nevada primary and while he wasn’t the star that his U.S. Senate counterpart Warren was in the debates, he certainly didn’t harm himself. Instead, it was Warren’s takedown of Bloomberg that astounded many. The former New York City mayor has enjoyed a number of key endorsements from notable Black politicians and celebrities in recent days despite Bloomberg’s record on policies such as “stop and frisk” getting exposed.

Some analysts believe that beyond Sanders’ potential clear path to victory, it’s being said that Warren has revived her campaign after it wilted in the wake of a spirited start. Other star candidates such as former South Bend, Ind. mayor Pete Buttigieg and the once-mighty former president Joe Biden showed they’ve clearly been in these fights before and Sen. Amy Klobuchar more than held her own.

Still, some are going with the stance that it was the Elizabeth Warren show and we’ve got the reactions from Twitter below.

They put the Ether beat behind her dissing Bloomberg. LOL!!

I see #Ether is trending this morning. I clicked it and see that it's in relation to last night's #DemDebate. That fact that people are saying The Notorious L.I.Z. was outchea "Ethering" people is further proof that Nas won that battle. pic.twitter.com/KoLOlUNjeg

‘F with your soul like ether
Teach you the king you know you
"God's son" across the belly
I prove you lost already’#Ether pic.twitter.com/kXgWiOkMqV

I saw that #ether was trending and knew exactly why before I even clicked. Black Twitter is a treasure y'all. Giggles galore for me this morning. Giggles, g a l o r e 😂 https://t.co/Tbsz1QLMBB

(I) Fuck with your soul like ether
(Will) Teach you the queen you know you
(Not) “Wealth Tax” across the belly
(Lose) I prove you lost already https://t.co/QPbNfpkGES

If you need a recap of last night’s debate: #DemocraticDebate #DemDebate #Ether pic.twitter.com/DJoYB02mrL

With this Nas “Ether” track playing on this #DemDebates Michael Bloomberg takedown, by the end I thought Elizabeth Warren was going to say:

“And that's the guy y'all chose to name your company after?” https://t.co/OisWyH7mg5

The setup. The delivery. The takedown. The crowd reaction. Liz Warren has bars. #Ether https://t.co/DDDAOsMrIt